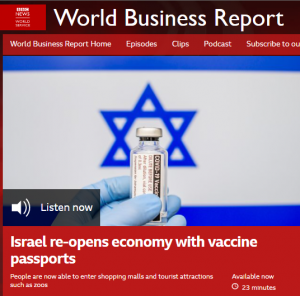 “A number of facilities are now able to reopen including gyms, hotels and synagogues but they require a “green passport”, a certificate that can only be obtained once you have been vaccinated. But it’s not all been smooth sailing as the BBC’s Middle East editor, Sebastian Usher explains.”

Most of that lead item (from 01:24 here) gave audiences a reasonable view of its stated topic. However from 04:32, listeners were once again witness to the recent BBC practice of promoting redundant linkage to the topic of vaccinations for Palestinians who are not Israeli citizens in reports ostensibly about Israel’s vaccination drive. Presenter Philip Hampsheir even opined that not to employ such framing would be ‘lacking care or attention to duty; negligent‘. [emphasis in italics in the original, emphasis in bold added]

Hampsheir: “So the prime minister Benjamin Netanyahu has said he expects 95% of Israelis over the age of 50 to be vaccinated in the next couple of weeks. There’s going to be plenty of countries around the world that look at that figure and are very, very envious. But it would be remiss if we talked about these kinds of numbers without asking the question what’s the situation like in the West Bank and Gaza.”

Usher: “The situation’s very, very different as you can imagine. Doses of vaccinations have only just begun to arrive and in their thousands…ah…not the hundreds of thousands. Just today 20,000 doses were delivered – donated by the UAE – and before that just several thousand doses have been able to get into Gaza. The Palestinian Authority in the West Bank is depending, to some extent, on this international COVAX system to provide vaccinations but that will take some time. And then looking around the world at all the different countries that have been producing their own vaccines to see who will help them, who will offer them those vaccines; looking particularly at Russia and at China at the moment. But they’re looking – rather than weeks – they’re looking at months to be able to really have a proper full vaccination programme.”

Ignoring the relevant fact that over 40% of the population of the Gaza Strip is under the age of 14 and older adults most at risk from Covid-19 make up less than 3% of the population, Sebastian Usher continued with one of the BBC’s regular themes; population density.

Usher: “The disaster that might have been expected in Gaza – which is one of the most tightly packed areas in the world and has a pretty poor health system – hasn’t happened so far fortunately. It’s a difficult situation and Israel has come under some pressure – from the Palestinians obviously but also from aid agencies to some extent internationally – to do more for the Palestinians. But there’s…as there is so often in this issue, there are radically different interpretations of the responsibilities. Israel says that under the Oslo Accords, which set up the Palestinian Authority, the Palestinians actually have their own responsibility for their own health system so Israel can help but it’s not obligated to help.”

Usher’s reference to unnamed “aid agencies” conceals from audiences the fact that the NGOs behind the opportunistic exploitation of the subject of Corona vaccinations for advancement of political campaigning include several with a record of lawfare campaigns against Israel and two that are known to have links to the PFLP terrorist organisation. In the nearly two months since the BBC self-conscripted to promotion of that political campaign, audiences have not been provided with that highly relevant information at all and the corporation continues to portray its initiators using misleading titles such as “human rights groups” and in this case, the even more inaccurate term “aid agencies”.

On February 9th the BBC issued a clarification acknowledging that “the Oslo Accords give the Palestinian Authority oversight of public health”. As we see BBC journalists nevertheless continue to mislead audiences by framing Article 17 of the 1995 agreement as something that ‘Israel says’ is the case.