Visitors to the BBC News website’s ‘Middle East’ page on February 27th found an item promoted with the heading “A man who tried to help Syria – and was crushed by disinfo”. 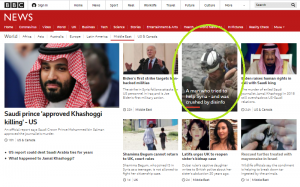 The link leads to a long article headlined “Mayday: How the White Helmets and James Le Mesurier got pulled into a deadly battle for truth” written by Chloe Hadjimatheou and is based on the BBC Radio 4 series titled ‘Mayday’ which she produced last year. 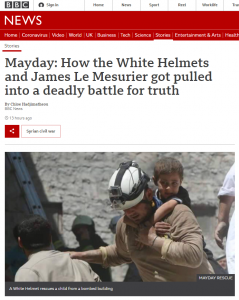 “The British man behind the Syrian civil defence group, the White Helmets, found himself at the centre of a battle to control the narrative of the Syrian war. Russian and Syrian propagandists accused his teams of faking evidence of atrocities – and convinced some in the West. The battle for truth formed a backdrop to James Le Mesurier’s sudden death in Istanbul in November 2019.”

As in the radio series, readers of this article are told of “razor-wire fences and concrete watch towers that marked the disputed border with Israel on the Golan Heights” even though that description is inaccurate. Once again BBC audiences hear of multiple “border crossings” that do not exist.

Like the radio series, the article notes the disinformation concerning the White Helmets put out by the Syrian and Russian regimes and the amplification of that propaganda by Western conspiracy theorists sympathetic to the Assad regime.

“James Le Mesurier was a man who lived several lives. He was a soldier, he was a Middle East traveller and an island dweller, a father and a husband and he was a humanitarian. And, like the people of Syria, he was a victim of disinformation.”

Nevertheless, this article once again fails to explain to audiences why the BBC itself adopted an editorial policy of promoting false balance – apparently in the name of ‘impartiality’ – by repeatedly publishing reports that amplified and mainstreamed what it knows to be propaganda put out by the Assad regime and its Russian ally and further spread by assorted conspiracy theorists.

REVISITING THE BBC’S AMPLIFICATION OF SYRIAN AND RUSSIAN PROPAGANDA