Last week the BBC published a five-year review of one of its own departments: the BBC World Service. 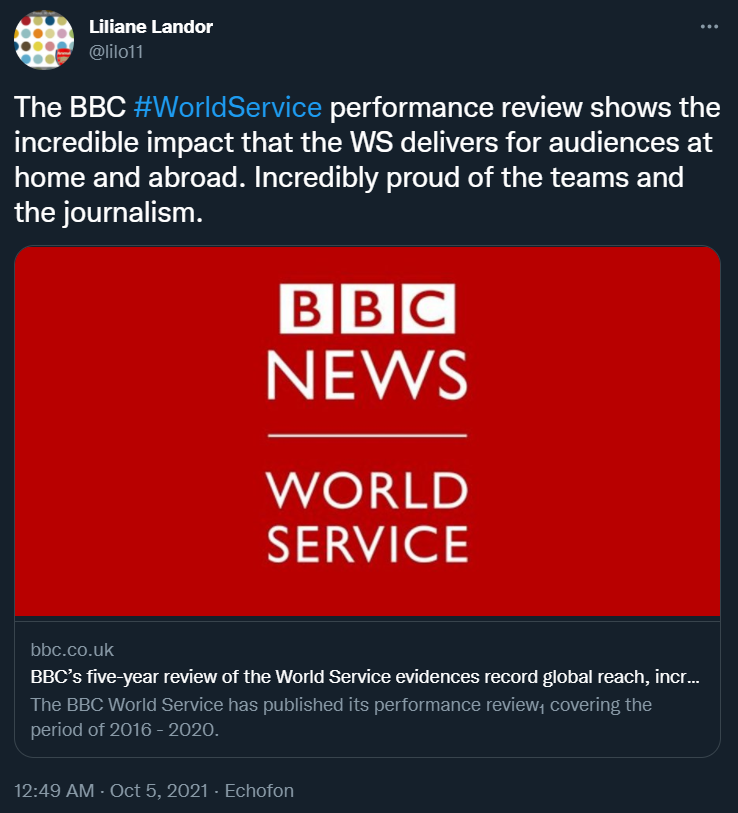 As explained in the PR blurb:

“The review, set out in the 2016 Agreement with the Secretary of State for Department for Digital, Culture, Media and Sport (DCMS), examines how the BBC World Service has performed in three key areas: growing global reach, achieving quality and impact, and delivering value for the UK audience.”

For anyone wondering about the connection between the BBC’s international broadcasts and “delivering value for the UK audience”, at least part of the answer is that the UK public provides substantial funding for the World Service, be it via the licence fee or taxes.

“In addition to the BBC’s £254 million annual commitment from the licence fee, significant grant-funded investment from the UK Government (FCDO) of more than £290 million during the period of this review has enabled the World Service to digitally transform whilst also carrying out its biggest expansion of services since the 1940s.”

The report itself opens with messaging that is repeated later in the report: 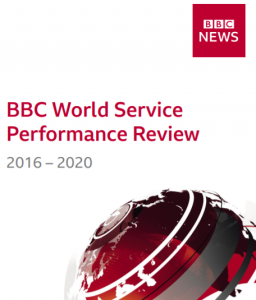 “BBC World Service is an essential part of the BBC’s global news offer: committed to accurate, impartial and independent news; contributing to the BBC’s position as the world’s most trusted international news broadcaster […]

Through news coverage that offers a global perspective on the world, the World Service helps audiences understand the world around them and make sense of competing views, serving as an independent, accurate and trusted guide as the range of available sources of information (and misinformation) grows.”

In relation to the Coronavirus pandemic, readers are told that:

“The World Service restructured its operations to provide a core news service to provide audiences with vital health explainers, separate the science from the politics, help audiences understand the wider implications of the pandemic on societies around the world and debunk misinformation as it travelled across borders.”

The work done by the World Service’s language teams, including the English service, to tackle disinformation is supported by BBC Monitoring. BBC Monitoring is part of the wider BBC World Service Group, and delivers essential media insight from over 150 countries, with specialisms in places where there is a deficit of reliable news and information. Their insight and expertise has been an essential part of helping UK and international audiences understand false information during the pandemic. Insight from BBC Monitoring has helped BBC journalists to understand the complex nature of misinformation and how it travels across borders, ranging across the entire spectrum of misinformation challenges – from how misleading information has accidentally gone viral to how some state narratives have deliberately tried to mislead audiences with information on their handling of the pandemic.”

That section also includes a ‘case study’ box titled “BBC World Service has been tackling the “infodemic” caused by coronavirus misinformation”. However, as CAMERA UK’s archives show, the rosy picture presented by the BBC in this report is partial in both senses of the word – and not only in relation to the Coronavirus pandemic. For example:

BBC MONITORING CLAIMS TO TAKE ON THE ‘MANIPULATION OF MESSAGING’

BBC WATCH SECURES ANOTHER CORRECTION TO A BBC ARABIC ARTICLE

The BBC World Service is the largest and most wide-reaching international broadcaster on the planet and from the point of view of global reach has certainly achieved its targets. However there is a significant difference between the licence target “[t]o provide accurate, impartial and independent news and current affairs covering international and national developments” and polled perceptions and ratings of reliability and trustworthiness, not least when polls are conducted in countries in which people are used to media which is less than independent.

In order to really meet its stated objective of “providing accurate, impartial and independent news and programming of the highest quality” the BBC World Service needs to address recurring issues relating to accuracy and impartiality, particularly in the foreign language services which do not always meet its declared editorial standards. The question is whether the self-inspecting format whereby the BBC produces reports about the BBC can really bring about the change required.