On February 11th visitors to the BBC News website saw a short report by the BBC Jerusalem bureau’s Tom Bateman titled ‘Israel starts vaccinating Palestinian labourers’ in which they found a filmed report by his colleague Yolande Knell and were told that:

“Health officials say around 700 people have been vaccinated, although the figure also included Palestinians from East Jerusalem who already came under Israel’s vaccine programme.

Israel has already been immunising Palestinian staff in its hospitals, some prisoners, and has delivered 2,000 doses to Palestinian officials for West Bank health workers. But this latest move amounts to a first – extending Israeli vaccines to some Palestinian labourers.

Israel has the fasted vaccination rate in the world for its citizens and vaccinating Palestinians has been controversial.

The UN and human rights groups say that, as the occupying power, it should do more. Israel says previous peace accords leave health provision to the Palestinian Authority.” [emphasis added]

As readers may recall, two days prior to the appearance of that report, the BBC had published a clarification indicating that it is well aware of the fact that not only “Israel says” that under the terms of the Oslo Accords healthcare for Palestinians is the responsibility of the Palestinian Authority: Article 17 of the agreement signed by the PLO in 1995 states:

“Powers and responsibilities in the sphere of Health in the West Bank and the Gaza Strip will be transferred to the Palestinian side, including the health insurance system.”

That report by Bateman was one of many which, since the beginning of the year, have promoted an anti-Israel political campaign initiated by political NGOs portrayed by the BBC as “human rights groups” which we documented here. 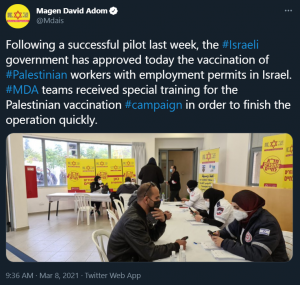 Since that report was published developments that went unreported by the BBC have taken place. On February 28th the Israeli government approved the plan to vaccinate some 120,000 legally employed Palestinians who are not Israeli citizens. On March 4th a pilot programme was set up and a further 700 Palestinian workers were vaccinated. After funding had been allocated by the Israeli government, the operation to vaccinate the rest of the authorised workers began on March 8th.

At that point the BBC Jerusalem bureau took up the story once again. On the afternoon of March 8th a report by Tom Bateman appeared on the BBC News website’s ‘Live’ and ‘Middle East’ pages under the headline ‘Israel starts vaccinating Palestinians with Israeli work permits’. Bateman’s ‘damned if you do and damned if you don’t’ take on a story about a country providing free vaccinations for tens of thousands of people who are not its own citizens was as follows:

“But the [vaccination] drive is adding to controversy about Israel’s responsibilities.

The group Human Rights Watch says that, as the occupying power, Israel should go much further than the current plan to cover up to 130,000 Palestinians.

Bateman’s promotion of claims from the inadequately presented political NGO ‘Human Rights Watch’ and others together with his misleading and unhelpful presentation of the Oslo Accords were also found in an audio report he presented in the same day’s evening edition of the BBC World Service radio programme ‘Newshour’. Presenter Tim Franks told listeners (from 39:02 here) that: [emphasis in italics in the original, emphasis in bold added]

Franks: “Israel has started vaccinating thousands of Palestinians who hold Israeli work permits. It says the step is out of common interest but rights groups say that the government should go much further for those in the occupied territories, especially given its success in inoculating its own citizens at the world’s fastest rate. Our Middle East correspondent Tom Bateman reports.”

A similar introduction was given by presenter Mishal Husain to a slightly longer version of Bateman’s audio report aired on the morning of March 9th on BBC Radio 4’s ‘Today’ programme (from 2:40:26 here).

Husain: “Israel has begun Covid vaccinations for the thousands of Palestinians who hold Israeli work permits. It says that that is in the common interest but rights groups are pressing the government to go much further on vaccinations in the occupied territories after the success in inoculating its own citizens at the world’s fastest rate.”

Bateman: “As daylight breaks, they come to work. Thousands of Palestinians from the West Bank pack a checkpoint, heading to jobs inside Israel. And with each click of the turnstile they’re a step closer to a life-saving vaccine. Ahmed, a builder, rolls up his sleeve as Israeli soldiers look on. This crossing is now a makeshift clinic. ‘I hope all Palestinians can get the injection’ Ahmed tells me. ‘We need to provide a normal life for our kids’.”

Bateman moved on to Bethlehem.

Bateman: “But the workers are the lucky ones. I drive through one checkpoint towards Bethlehem. There’s a tough new lockdown as Covid rates surge. Few signs of life on one famous street.”

Having spoken to a priest and the father of a family in quarantine, Bateman went on to promote his misleading ‘Israel says’ account of the Oslo Accords and to promote the notion of ‘limited self-rule’ despite the fact that the PA has full control in Area A and full civil control in Area B – the two areas where the vast majority of Palestinians live.

Bateman: “Up to three million Palestinians in the occupied West Bank are still waiting for vaccines. Israel says previous peace agreements give the Palestinian Authority, which has limited self-rule, full responsibility. But it’s been able to give out only a few thousand doses so far.”

Notably Bateman avoided the topic of domestic criticism of the PA’s priorities in vaccine distribution, which have included sending 200 doses to Jordan.

Following an interview with a restaurant owner, Bateman told listeners:

Bateman: “Back at the checkpoint they’ve vaccinated hundreds of workers. But human rights groups say Israel should be doing much more in the occupied territories.”

Once again BBC audiences were told nothing of the political agendas of those anonymous “human rights groups” and given no information which would help them make up their own minds about the politicised campaign to which the BBC self-conscripted in early January.

Following a short interview with a representative of COGAT, Bateman gave take-away messaging promoting false linkage between Israel’s vaccination programme and Palestinians who are not Israeli citizens:

Bateman: “While Israel’s vaccine rate has been world-beating, any roll-out for millions of Palestinians remains painfully slow.” 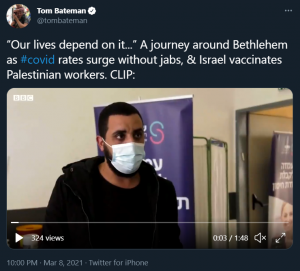 Bateman has since promoted that audio report on Twitter, along with a clip from a filmed version apparently shown on BBC television stations.

The BBC’s February 9th clarification concerning the Oslo Accords is obviously meaningless if its employees carry on promoting the notion that the part of the agreements concerning health is merely something that ‘Israel says’ is the case. Tom Bateman continues to do precisely that in his unremitting amplification of a political campaign aimed at delegitimising a country funding vaccinations for non-citizens whose healthcare is actually the responsibility of the Palestinian Authority.