The British Muslim site 5 Pillars fancies itself a serious news outlet. However, the counter-extremism organisation Quilliam Foundation has demonstrated that it has track record of defending hate preachers and peddling anti-Israel conspiracy theories, including about Al-Aqsa Mosque.

Readers may recall our post from last October, when we prompted a correction at 5 Pillars to an article which included the false claim that Tzipi Hoteveley, Israel’s ambassador to London, has “promoted the movement to destroy Jerusalem’s Al-Aqsa Mosque”.

Their latest act of journalistic malice regarding the ‘danger to Al-Aqsa’ is even more egregious. It’s in an official 5 Pillars editorial (“Masjid Al-Aqsa: Its history, its significance and the urgent need for protection”, March 8), which, as you’ll see, reads, at times, like a parody.

The editorial focuses on this photo: 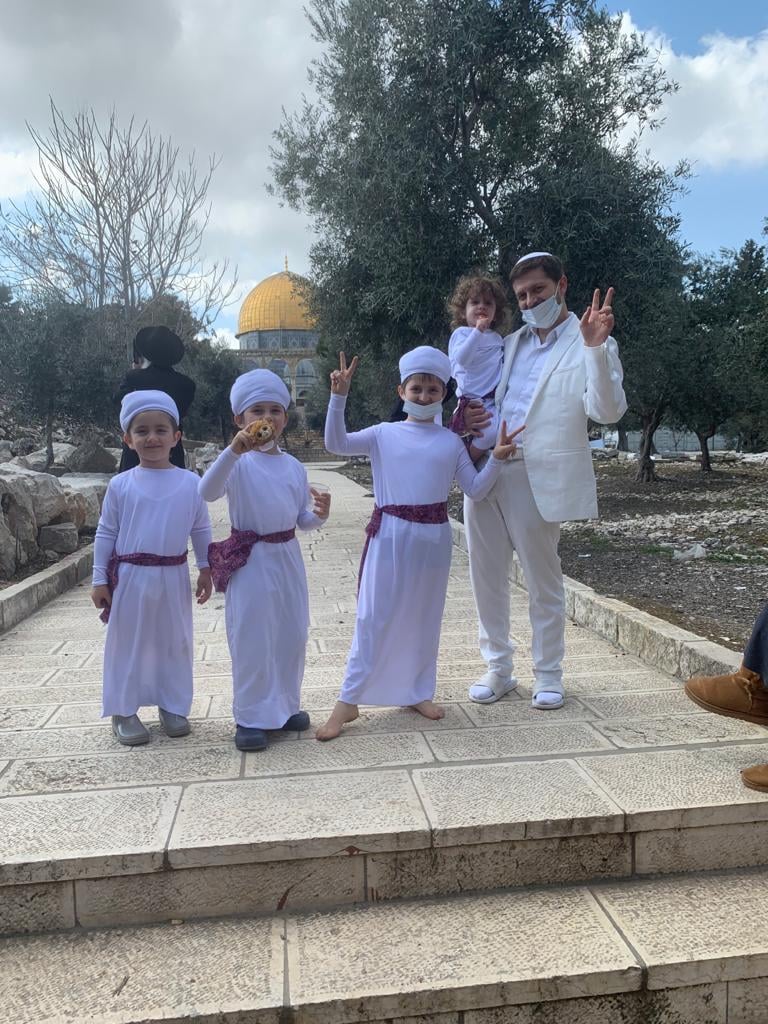 Last week a seemingly innocuous photo was posted onto social media – a father with his children pictured in the Al-Aqsa Mosque compound with the stunning Dome of the Rock in the background and their fingers raised in victory signs.

At first glance it appears nothing more than a sweet family moment. Yet this was a Zionist family who had forced their way into Al-Aqsa dressed in the robes of the priests of the Temple many Israelis want to establish on this sacred Islamic site.

Jordan has administered the Al-Aqsa Mosque compound since the Israelis occupied the area in 1967, and Amman has an agreement with Tel Aviv [sic] officially prohibiting Jews from entering the site to worship.

But the blatant incursion of this family (which is just one of many) says otherwise.

Oh my, where to begin?

First, we traced down the photo.  It was posted on Facebook, and, as we thought, the children were dressed up for Purim.  Also, the fact that one of the children had both hands up with two fingers raised is almost certainly innocuous, rather than some sinister sign that the family was claiming “victory” over the mosque.

Additionally, as Jews are allowed, according to the status quo agreement, to visit the Temple Mount, the claim that the the family “forced their way into Al-Aqsa” is of course a lie.  It wasn’t an “incursion”, but a Jewish family visiting Judaism’s holiest site for the holiday.

The editorial also includes the following:

within living memory, the most serious assault on the Masjid Al-Qibly [Al-Aqsa Mosque] was a fire started by an evangelical Australian Christian Zionist in 1969.

Panic-stricken Palestinians rushed to the site carrying water to put out the fire and save precious antiquities in the mosque. Fire brigades were called but the occupying Israeli army refused to let the fire engines from across the West Bank enter.

Protests by Palestinians, both Christian and Muslim, forced them to eventually allow the fire brigades to enter.

First, the characterisation of the Australian man who started the fire, Denis Michael Rohan, as a “Zionist” who was ideologically motivated is extremely misleading.

Rohan suffered from serious mental illness, and claimed, during his trial in Jerusalem, that “heavenly voices” told him to set fire to the Mosque.  He was found to be mentally ill, deported to Australia and committed to a mental institution. Further, the trial established that Rohan gained access to the mosque, off-hours and with a backpack full of explosives, by bribing the Muslim guards and the sheikh supervising them.

Moreover, 5 Pillars’ claim that Israeli authorities prevented Palestinians from putting out the fire, our Arabic researchers have confirmed, is a common libel in the Arab media, one echoed by Islamist extremist preachers like Raed Selah, and pro-Hamas propaganda outlets like MEMO.

Scholar and historian Nadav Shragai has written that it’s a baseless libel, and Ynet journalist Yaron Druckman has written, in an account of the events surrounding the fire, that the opposite is true. “Whether intentional or not”, he wrote, “hundreds of the old city’s Muslim residents”, outraged at the fire which they falsely assumed started by a Jew, “interfered with the firefighters attempts to control the flames”.

A contemporaneous account by JTA on Aug. 22, 1969 backs up this account.  The article reports that “according to Fire Chief J. Lieberman, they were pelted with rocks and sticks and even assaulted bodily by mobs of infuriated Arabs who were already on the scene.”

Also, see this archival footage by Associated Press, taken the day of the fire, that shows Israeli firefighters putting out the blaze.

The 5 Pillars editorial advances another conspiracy theory towards the end:

Moreover, over the past decade Israel has constructed a series of tunnels in the occupied Palestinian neighbourhood of Silwan in East Jerusalem, south of Al-Aqsa. [Israel] has forcibly evicted Palestinians from the area as part of the Kedem colonial settlement project and many fear the tunnels are part of a strategy to weaken the foundations of Al Aqsa and provide a means of access for the Zionist colonists.

The trope that sinister Jews are plotting to build an underground entry point to weaken the foundations of Al-Aqsa and/or gain access to the mosque, under the ‘pretext’ of archaeological digs, is a common Arab conspiracy theory that is cynically employed by Hamas and other extremists to incite Palestinians to violence.

Here are some political cartoons in the Arab media over the years to provide a sense of the antisemitic nature of these conspiratorial accusations. 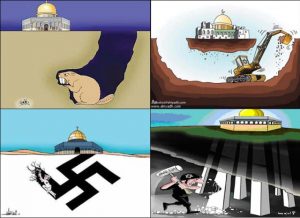 The editorial ends with this:

So the reality is that Al-Aqsa remains under attack and under threat, yet its history shows that it has survived natural as well as man-made disasters. The third holiest site in Islam has risen literally from the ashes and ruins to be rebuilt and restored but whilst it is at risk Muslims worldwide must do everything they can to safeguard its future

This rhetorical incitement, peddling tropes about the threat to Al-Aqsa that have incited anti-Jewish violence for nearly 100 years, is extremely concerning given that 5 Pillars is a news site read by British Muslims who likely believe what their editors claim: that they are a “serious news site” which “adheres to a rigorous set of journalistic standards”.

To reinforce the perception that they are a “serious news site”, in 2018 they signed up to the independent media regulatory agency IMPRESS – a body where we’ll take our complaint if editors refuse to correct the egregious falsehoods we documented in this post.