The September 14th early edition of the BBC World Service radio programme ‘Newsday’ included an item which was also promoted separately on Twitter under the headline “Covid-19: Israel prepares for second lockdown”. 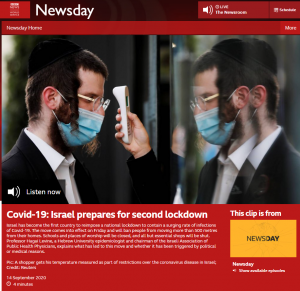 “Israel has become the first country to reimpose a national lockdown to contain a surging rate of infections of Covid-19. The move comes into effect on Friday and will ban people from moving more than 500 metres from their homes. Schools and places of worship will be closed, and all but essential shops will be shut. Professor Hagai Levine, a Hebrew University epidemiologist and chairman of the Israeli Association of Public Health Physicians, explains what has led to this move and whether it has been triggered by political or medical reasons.” [emphasis added]

In his introduction to the item (from 13:31 here) presenter Lawrence Pollard repeated the claim that “schools, places of worship are gonna be closed, which has been controversial…”. Listeners were not informed that the three-week lockdown falls on a period in which schools would for the most part be closed anyway because of the Rosh HaShana, Yom Kippur and Succot holidays.

The claim that “places of worship will be closed” is not accurate. As the Times of Israel and other local media outlets explained:

Red areas: Prayer shall be permitted in closed structures in groups of up to 10 people. The permitted number of groups in a closed area shall be a function of the number of entrances to the structure. The first two entrances multiplied by 3 and each additional entrance multiplied by 2, on condition that the ratio of one person per 4 square meters of space of the place is maintained.

In areas that are not red: in closed structures, prayer shall be permitted in groups of up to 25 people. The permitted number of groups in a closed space shall be double the number of entrances to the structure on condition that the ratio of one person per 4 square meters of space of the place is maintained.

For example, in a house of prayer in a yellow area that is 400 square meters in size and which has two entrance doors, it shall be permitted to have 4 capsules of 25 people each (25 people in each capsule, 2 entrances multiplied by 2, yields 100 people in the structure while maintaining the ratio of one person per 4 square meters of space.”

Pollard: “…one of the things that has led to this in the build-up is a huge argument, which is inevitably a political argument, about closing places of worship, which are gonna be very busy in coming days as I understand it. So why has this political decision been made?”

They later heard the following from Pollard’s interviewee:

Levine: “…we are coming now to the dreadful days [sic] of Judaism, the holiest holidays of the new year – Rosh HaShana and Yom Kippur – and people gather in the synagogues and it’s very difficult because, you know, people want to be with their communities. It’s extremely important for them, it’s a life and matter issue and on the other hand it’s clearly a risk in transmission. So, you know, there is no easy solution. So the government thought it’s more easy just to shut down the country.”

Levine also misled BBC audiences on another topic – with no challenge whatsoever from Pollard.

Levine: “You spoke about worship but there is another obstacle which is the demonstrations. Over the last weeks there are huge demonstrations against Prime Minister Netanyahu in Israel and he seems to be very worried politically about that. And now the Israel government decided to lock down people – with police – that they cannot…they are not allowed to go over 500 meters from their homes, including for demonstrations. That’s the decision of the Israeli government. Very unusual decision.”

In fact, as reported in the local media, Israel’s Attorney General informed cabinet ministers during their debate on the measures to be implemented that “they cannot prevent protests during the lockdown” and some protest organisers announced their intention to continue demonstrations. During the previous similar restrictions earlier in the year (during which for part of the time Israelis were confined to 100 meters from their homes), demonstrations also took place.

Clearly the ‘Newsday’ team had not done sufficient research into the topic of the format of the upcoming restrictions in Israel and Lawrence Pollard hence not only failed to challenge and correct the inaccurate information given on air (and subsequently further promoted as a stand-alone item on social media) by his interviewee as stipulated in the corporation’s editorial guidelines but further compounded it.