Readers may recall that on January 26th ‘Reality Check’ – portrayed as BBC News’ “fact-checking arm” – published an article headlined “Covid-19: Why are Palestinians not getting vaccines?” on the BBC News website:

That article has since been updated at least seven times and on February 17th its title was changed to “Covid-19: Why are Palestinians behind in vaccine efforts?”. Nevertheless, many of the issues raised in our discussion of the original version still remain. 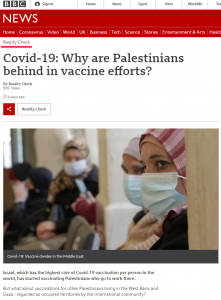 The latest amendments to that article were made on March 11th and it now informs readers of Israel’s drive to vaccinate Palestinians working legally in Israel which commenced on March 8th .

“Israel, which has the highest rate of Covid-19 vaccination per person in the world, has started vaccinating Palestinians who go to work there.

But what about vaccinations for other Palestinians living in the West Bank and Gaza – regarded as occupied territories by the international community?”

The answer given to that question reads as follows: [emphasis added]

“The Palestinian Ministry of Health – which operates in the West Bank – says it has deals with four companies that will provide enough vaccines for 70% of its people.

Getting vaccines to Gaza is faced with the logistical challenges of the restrictions imposed on the area, which has been under blockade by Israel and Egypt since the militant Islamist movement Hamas took charge there in 2007. […]

Israel says it is giving 5,000 doses to the Palestinians, two thousand of which have been delivered to the West Bank so far.”

That highlighted paragraph has appeared in one form or other in all versions of the report so far. As noted here previously:

“The “restrictions imposed” on the Gaza Strip apply solely to dual-use goods that can be employed for terrorist purposes and do not apply to medical supplies, including vaccines. Since the beginning of the pandemic the WHO has regularly delivered supplies and equipment including ventilators to the Gaza Strip via the crossings from Israel and there is no evidence whatsoever to support the BBC’s allegation that the supply of vaccines risks being hampered by the counter-terrorism measures taken by Israel.”

That latest delivery was not reported in this updated version of the ‘Reality Check’ article and neither has it been reported in other BBC content to date.

With 62,000 doses of the Russian vaccine having now been delivered to the Gaza Strip, the redundancy of the BBC’s repeated claim that “[g]etting vaccines to Gaza is faced with the logistical challenges of the restrictions imposed on the area, which has been under blockade by Israel and Egypt since the militant Islamist movement Hamas took charge there in 2007” is even more apparent.

Equally notable is the updated article’s failure to make any mention of the criticism concerning the Palestinian Authority’s distribution of the 12,000 doses it has already received, including its transfer of 200 doses to Jordan.