On January 26th the BBC News website published an article by ‘Reality Check’ – portrayed as BBC News’ “fact-checking arm” – headlined “Covid-19: Why are Palestinians not getting vaccines?”. 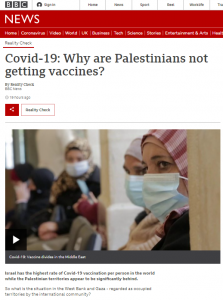 That article has since been amended several times. At its head appears the one-sided filmed report by Yolande Knell, versions of which were widely promoted by the BBC the previous day. Readers then find signposting relating to the status of the Gaza Strip – from which Israel withdrew over a decade and a half ago – and areas under full or part control of the Palestinian Authority: [emphasis in bold added]

“Israel has the highest rate of Covid-19 vaccination per person in the world while the Palestinian territories appear to be significantly behind.

So what is the situation in the West Bank and Gaza – regarded as occupied territories by the international community?”

Among the inaccurate claims in that ‘fact-checked’ article is the following:

“The WHO told the BBC that vaccines supplied under the Covax scheme, as well as those procured by the Palestinian authorities, would go to Gaza.

However, it is faced with the logistical challenges of the restrictions imposed on the area, which has been under blockade by Israel and Egypt since the militant Islamist movement Hamas took charge there in 2007.”

The “restrictions imposed” on the Gaza Strip apply solely to dual-use goods that can be employed for terrorist purposes and do not apply to medical supplies, including vaccines. Since the beginning of the pandemic the WHO has regularly delivered supplies and equipment including ventilators to the Gaza Strip via the crossings from Israel and there is no evidence whatsoever to support the BBC’s allegation that the supply of vaccines risks being hampered by the counter-terrorism measures taken by Israel.

Under the sub-heading “Whose responsibility is it to vaccinate Palestinians?” readers are told that:

“The United Nations (UN) human rights body has released a statement saying it’s Israel’s responsibility to provide equitable access to Covid-19 vaccines for Palestinians in Gaza and the West Bank.

The body says differential access is “morally and legally” unacceptable under international law laid out in the Geneva Conventions on the regulation of occupied territories.”

That link directs readers to the statement put out by two UNHRC special rapporteurs which audiences have already seen promoted and quoted in other BBC content but the article provides no explanation of the fact that they are not UN members of staff and does not make any mention of the obviously relevant anti-Israel record of one of the two.

Failing to provide a link to the relevant section of the Oslo Accords, the report goes on to claim that the PA has “oversight of public health” rather than “[p]owers and responsibilities in the sphere of Health in the West Bank and the Gaza Strip” as actually stated in the agreement.

“But Israeli health minister, Yuli Edelstein, told the BBC: “We can also look into the so-called Oslo agreements where it says loud and clear that the Palestinians have to take care of their own health.”

The Oslo accords – which Israel signed with the Palestine Liberation Organisation – give the Palestinian Authority oversight of public health under the principles of self-determination.

But the Palestinian authorities point to another part of those accords which says: “Israel and the Palestinian side shall exchange information regarding epidemics and contagious diseases, shall co-operate in combating them and shall develop methods for [the] exchange of medical files and documents.””

That quoted part of the agreement – Section 6 – does not specify any Israeli obligation to supply vaccinations to combat “epidemics and contagious diseases” and indeed section 2 of Article 17 clearly states that it is the Palestinians who are responsible for vaccination programmes:

Failing to inform readers of the exploitation of the topic of Coronavirus vaccinations for the promotion of a political campaign to discredit Israel to which the BBC has given considerable amplification over the past month, the article continues with promotion of the claims of “UN experts”:

The experts say the fourth Geneva Convention is specific about the duty of the occupying power to provide healthcare, but Israel often argues it isn’t technically occupying the West Bank and Gaza.

It’s a matter on which international law experts disagree, and many issues surrounding the governing and final status of the occupied territories remain unresolved.”

In other words, this article by BBC Reality Check fails to actually inform BBC audiences “whose responsibility it is to vaccinate Palestinians” and instead continues to promote politically motivated claims and statements on that subject.

Nevertheless, a subsequent report titled “Covid: Israel to transfer 5,000 vaccine doses to Palestinians”, which appeared on the BBC News website’s ‘Middle East’ page on January 31st, links to and recycles much of the inadequate information promoted in the ‘Reality Check’ article. 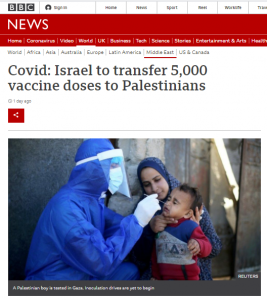 ‘“In accordance with the recommendation of the Defense Minister and the Coordinator of Government Activities in the Territories, the political echelon approved [on Friday] the transfer of 5,000 vaccine doses to medical teams in the Palestinian Authority,” a military source said in a statement.’

The first batch of 2,000 doses of the Moderna vaccine were indeed transferred the day after the publication of the BBC’s report, which opens with a link to the statement put out by two UNHRC special rapporteurs that was promoted in the ‘Reality Check’ report.

Israel has one of the most advanced vaccination programmes in the world but Palestinians in the occupied West Bank and Gaza have yet to see one.

UN experts say Israel has a responsibility for vaccinations there.

Israel says that is not part of agreed protocols and it has not received any requests from the Palestinians. This is its first such transfer.”

However Palestinian Media Watch reports that: 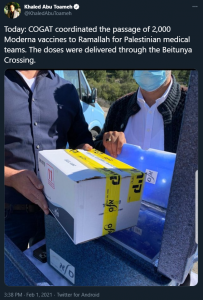 “According to an answer submitted in response to a petition to Israel’s High ‎Court of Justice, on Jan. 4, 2021, the PA contacted Israel and asked for an amount of ‎vaccines for over 100 Palestinian medical staff members aged over 60 who are treating ‎Coronavirus patients in the PA. With the consent of the Israeli Minister of Health, the ‎director-general of the Ministry of Health approved the request in a humanitarian ‎gesture, and Israel transferred the vaccines to the PA on the very same day.‎”

Later on in the report readers find another reference to the same two “UN experts” – again without any explanation of the fact that they are not UN members of staff or any mention of the obviously relevant anti-Israel record of one of the two.

“The office of Israeli Defence Minister Benny Gantz confirmed on Sunday that Israel would make the transfer [of vaccines] to the Palestinian Authority. The Palestinians have not yet commented.”

AFP however reported that ‘A Palestinian official dismissed the offer, telling the AFP it was a “symbolic move” and “will not help us”’ while the Jerusalem Post quoted an unnamed PA official as saying that “no decision had been made about sharing these doses with the Gaza Strip, which is controlled by Hamas” and journalist Khaled Abu Toameh noted that “Palestinian Ministry of Health says it received today 2,000 Moderna vaccines, but doesn’t say where they came from (Israel)”.

In a section sub-headed “What is the situation in the territories?” readers find a misleading reference to “limited self-rule”: a theme increasingly seen in BBC News website content of late.

“Neither the West Bank, whose limited self-rule is run by the Palestinian Authority, nor Gaza, controlled by militant Islamist movement Hamas, has started vaccination programmes.”

In another section sub-headed “Whose responsibility is it to vaccinate Palestinians?” readers again find the filmed report by Yolande Knell which was given extensive cross-platform promotion the previous week.

Readers also find an unhelpful ‘he said-she said’ portrayal of the relevant parts of the Oslo Accords as something that ‘Israel says’ is the case.

“Israel points to the Oslo accords, agreed in 1993 and 1995, which set out how parts of the West Bank and Gaza would be governed under an interim framework until a permanent peace settlement can be reached.

It says these give the Palestinian Authority oversight of public health under the principles of self-determination.

The Palestinians say those accords also say Israel should co-operate in combating epidemics and contagious diseases.”

UN experts say the Geneva Convention on occupied territories takes priority over these accords and it is Israel’s responsibility to provide equitable access to vaccines for Palestinians in Gaza and the West Bank.

But international law experts disagree on this and on many other issues surrounding the occupied territories.”

UK Lawyers for Israel points out that:

“as the occupying power, Israel is required under the Fourth Geneva Convention, ‘to the fullest extent of the means available to it’, to maintain health services in the occupied territory. Article 56 requires Israel to adopt and apply ‘the prophylactic and preventive measures necessary to combat the spread of contagious diseases and epidemics’ in cooperation with national and local authorities”

“If the protected population is inadequately supplied, the occupying power is required under the Convention to facilitate relief schemes ‘by all means at its disposal’. Even if relief consignments, including ‘medical supplies’, are provided by others, Article 60 states that such consignments ‘shall in no way relieve the occupying power of any of its responsibilities’ for health care to the protected population.”

In fact, Articles 56 and 60 of the 4th Geneva Convention are not included in the provisions specified in its Article 6(3) that bind an Occupying Power for the duration of an occupation. In accordance with Article 6(3) they cease to apply in an occupied territory one year after the general close of military operations.

The International Court of Justice advised in the so-called “Wall” case: “Since the military operations leading to the occupation of the West Bank in 1967 ended a long time ago, only those Articles of the Fourth Geneva Convention referred to in Article 6, paragraph 3, remain applicable in that occupied territory.” (para 125)

Therefore, even if the West Bank and/or Gaza are “occupied territory” within the meaning of the 4th Geneva Convention, Articles 56 and 60 ceased to apply to them in 1968. The statements quoted above are thus wrong and misleading on any view.”

In other words, even the BBC’s ‘fact-checking’ department has failed to provide audiences with a sufficiently critical analysis of the statement put out by the two UNHRC special rapporteurs it portrays as “experts”.  As we see, BBC self-conscription to promotion of the political campaign that statement (and others) is designed to advance continues apace one month after it began.