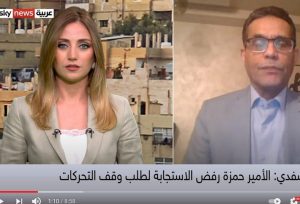 Responding to host Christiane Baissari’s questions about the turmoil involving King Abdullah II’s younger brother (and former heir apparent to the King) Prince Hamzeh – as well the arrests of political figures across the country – Madi opened with the following comments:

Baissari: “When [Jordanian FM and deputy PM] Ayman Safadi talks about [Prince Hamzeh] ‘collaborating with external parties’, what does he [Safadi] mean exactly?”

Madi: “When we talk about the numerous external parties which could interfere directly in an internal Jordanian affair, we shall speak of the political settings during recent times, manifested by the uncomfortable and unstable relations with the Israeli side. From this standpoint I reckon that Israel had had a few vicious hands which attempted to destabilize Jordan that way. Also, several [acts of] interference may exist, [coming] from Israel as well, alongside a few Jordanian elements [lit. Asabi’, ‘fingers’] who live abroad – also in attempt to destabilize Jordan from the inside and to penetrate Jordan’s political scene and social stability”.

Baissari: “Well, are those who live abroad and co-conspire with Israel the external opposition which Ayman Safadi talks about?”

Madi: “They are individuals, they do not consist of a real stance in the opposition, rather they are individuals who try to object Jordanian internal policies, be it from the political, social or economical aspect. Yes, they label themselves ‘opposition’, however they do not possess any political influence whatsoever in this respect. But subsequently, in the last three or four years, they have been much intense activity in attempt to harm security and stability by a near-daily transmission of messages to the Jordanian street, always trying to disrupt the internal political scene in Jordan.”

Baissari: “Mm-hm. [Moves on to the next topic]”

Throughout the entire segment, Baissari didn’t once challenge Madi’s unfounded claims that Israel is behind whatever hardship the Jordanian regime is currently experiencing – and that this is the view of the Hashemite Kingdom’s government as well. Madi’s sole rationale for raising this wild accusation was the existing “uncomfortable and unstable relations” between the two countries, and both he and his interviewer seemed certain that this pseudo-evidence was sufficient to warrant his uninterrupted live diatribe on a television channel watched by millions.

It bears mentioning that most rumors about Israel’s connection to recent days’ drama in Jordan revolved around a single report from Sunday, published by Ammon news agency’s website, only to be retracted from there shortly after.

The report speculated that Israeli Roy Shaposhnik, who reportedly offered to help the Prince’s family flee the country “on a private jet”, was “an ex-Mossad agent”. Shaposhnik, an Israeli living in Europe, later denied any connection to Israel’s intelligence services, although he did confirm that he and the Prince are friends and that Shaposhnik suggested the Prince could send his wife and children over to his place so that they’ll have somewhere to stay during the difficult time. Nevertheless, this story was not discussed by Madi and Baissari.  They also didn’t mention the Israel HaYom report which argued that Israel actually helped King Abdullah against the plotters by providing him intelligence which led to some arrests.

In fact, other than the principal accusation against Israel, Madi’s speech was completely lacking in specifics. Over and over, he resorted to evoking nameless “opposition individuals” (without revealing what exactly is it that they oppose), and attributing to them general allegations of “destabilizing” (without clarifying what concrete things did they said and did).

Given his propagandistic style, one cannot help but wonder in what capacity Badr Madi was chosen as an interviewee by Sky News Arabia’s editorial board. Was he brought on as an “impartial” commentator, or just as an ordinary, off-the-street Israeli conspiracy theorist (indeed, they are rather abundant in Arabic-speaking media)?

Whatever were the station’s expectations by putting him on air, the segment failed to meet basic journalistic standards of impartiality and accuracy; at times it seemed to us that even host Baissari was struggling to maintain a straight face while encountering her guest’s sensational, yet completely unsubstantiated allegations.

As regular readers of CAMERA UK likely know, since Sky News Arabia is a joint venture between the UK-based Sky News and the UAE-based Abu Dhabi Media Investment Corporation, it often prioritises Emirati interests over professional standards. As such, it is hard to avoid the conclusion that this segment serves as an alarming sign not only regarding the sub-par journalism of Sky News Arabia, but also the willingness of the station’s patrons – the UAE – to tolerate and even amplify libelous accusations against Israel during the Abraham Accords era.