On the evening of April 13th rioting took place in Jerusalem:

“Five people were arrested Tuesday night as hundreds rioted in East Jerusalem after returning from prayers on the first night of Ramadan, police said Wednesday.

Muslim worshipers gathered near the Old City’s Damascus Gate and clashed with cops stationed there, according to police.

Additionally, rocks, glass bottles and firecrackers were thrown at police officers, mildly injuring one of them.”

Similar incidents occurred on the nights that followed:

“Police said that during rioting in Jerusalem’s Old City, rocks and glass bottles were thrown at officers, one of whom was attacked while dispersing rioters at Herod’s Gate. The officer sustained a head injury that required medical care, according to police, who said a suspect was arrested.”

“A handful of East Jerusalem Palestinians have circulated videos in which they can be seen striking apparently uninvolved ultra-Orthodox and religious Jewish passers-by. The clips, uploaded to the social network TikTok, have evoked widespread condemnation by both Jewish and Arab MKs.”

That was followed by attacks carried out by Jewish youths.

“Police arrested six Jewish suspects who allegedly assaulted an Arab man and hurled stones at vehicles on Sunday as racial tensions in Jerusalem continued to fester.

The BBC did not produce any reporting on those nine days of unrest prior to the announcement from the extremist Jewish group ‘Lehava’ that it would march to Damascus Gate on April 22nd.

“Some 300 activists from the Lehava group took part in the march that brought them to within a few dozen meters of Damascus Gate where Palestinians had gathered in a counter-protest.

Lehava protestors chanted “Death to the Arabs!” and “Arabs get out!” as police tried to keep the two sides apart while also dealing with attacks from the Palestinian protestors, who had gathered at the gate to counter the expected march and began throwing rocks and bottles at police.”

On the morning of April 23rd the BBC News website published a report now headlined “East Jerusalem clashes leave over 100 injured” on its ‘Middle East’ page which includes footage from the scene filmed by the Jerusalem Post’s Seth Frantzman. 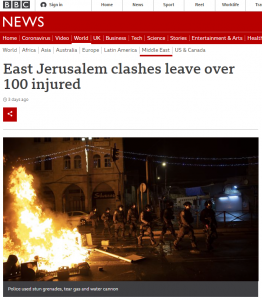 As is so often the case in BBC reporting, the article began by informing readers of the latest events with the incidents of the previous nine days relegated to its final three paragraphs.

Although the area in front of Damascus Gate was classified as ‘no man’s land’ in the 1949 Armistice Agreement, by way of ‘background’ readers were told that:

“East Jerusalem has long been a flashpoint, with an uneasy coexistence there between Jews and Arabs.

Israel has occupied East Jerusalem since the 1967 Middle East war and considers the entire city its capital, though this is not recognised by the vast majority of the international community. Palestinians claim East Jerusalem as the future capital of a hoped-for independent state.”

Notably, while the BBC’s report includes descriptions of the political ideologies of one group involved in the incidents, no such information was provided with regard to the “Palestinians” at the scene.

“Scores of people have been injured in clashes in East Jerusalem between far-right Jewish activists, Palestinians and Israeli police.

The worst fighting in days broke out on Thursday night after hundreds of Jewish extremists from the ultra-nationalist Lehava group marched towards the Damascus Gate entrance of Jerusalem’s Old City – where large numbers of Palestinians had gathered – chanting “Death to Arabs”.” [emphasis added]

Neither were BBC audiences given any information concerning the connection between the rioting which had already been taking place for over a week before the April 22nd incidents and the scheduled Palestinian Authority election or the support for that violence expressed by the PA’s prime minister, as well as by Hamas and other Palestinian factions.

Also on the morning of April 23rd, listeners to Radio 4’s ‘Today’ programme heard a report from the BBC Jerusalem bureau’s Tom Bateman (from 42:15 here) which was introduced by presenter Martha Kearney as follows: [emphasis in bold added]

Bateman also took care to signpost the political views of “Jewish activists” while avoiding the topic of those of the Palestinian rioters.

Bateman: “I watched as hundreds of young men – this is a group of far-right Jewish ultra-nationalists – marched from downtown Jerusalem towards Damascus Gate. That is the entrance to the Muslim Quarter of the Old City where there have been nightly confrontations between Palestinians and Israeli security forces. The marchers wanted to reach that area. The police were largely managing to stop them and to push them back but at Damascus Gate itself once again I saw clashes, confrontations between the Israeli police and the Palestinians there. There were water cannons being used and stun grenades fired by the police and some of the Palestinians were throwing objects and stones back at the police.”

Kearney’s sole question throughout the item reinforced the same theme:

Kearney: “And tell us more about this…ahm…far-right ultra-nationalist group.”

Bateman: “Well it’s a group called Lehava. What’s been happening is really ever since the Covid restrictions were eased and people were getting back out into normal daily routine and things, that coincided with the start of Ramadan, the Muslim holy month. And at Damascus Gate in the evening after Iftar – after the Iftar meal – and after the evening prayers, it’s a pretty popular place for Palestinians to gather. Now the Palestinians said that the Israeli police were putting up barriers and stopping people gathering. That’s been leading to these clashes. At the same time we’ve seen some attacks by Palestinians on ultra-orthodox Jews around that area and some videos of that were posted on TikTok. That has led…that led to a rise in tensions and these far-right groups [plural – sic] tried to use that to head down and we saw then, you know, clashes and some Palestinians being chased by the far-right groups [plural – sic].”

Bateman: “It feels like there’s a bit of a political vacuum in Israel at the moment. There are far-right MPs who are trying to be part of a new coalition. That has added, I think, fuel to the rhetoric in all of this and the point about the Old City of Jerusalem and its holy sites is that once you get a flare-up in tensions, things can slip out of control pretty quickly.” 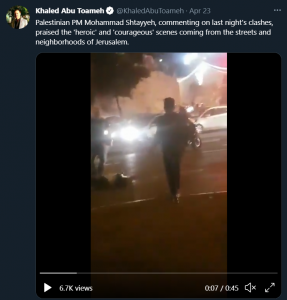 As in the written report, Bateman’s ‘analysis’ did not include any mention of Palestinian political factions engaged in an election campaign and their encouragement of the violence in Jerusalem. Neither did he bother to inform audiences of the fact that an uptick of violence during Ramadan is something the Israeli security forces have had to deal with for many years.

Both these BBC reports are notable for the fact that no effort was made to portray the ideologies of the Arab rioters who began the chain of events in Jerusalem: even those who attacked random Jews and uploaded videos to social media were not described as “far-right” or “ultra-nationalist”. Likewise, both reports completely ignored the broader background of the influence of Palestinian politics on the events taking place on Jerusalem streets. Those glaring omissions mean that BBC audiences were presented with only part of a story which is likely to form the basis for future reporting.

0 replies on “Omissions in BBC coverage of violence in Jerusalem”