The interviewee on the January 26thedition of the BBC News Channel programme ‘Hardtalk’ – hosted by Stephen Sackur – was Israel’s Minister of Health, Yuli Edelstein. 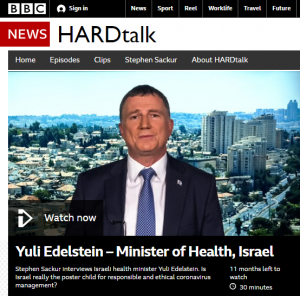 “Israel is leading the world in the rollout of the Covid-19 vaccine. The prime minister claims that the vast majority of adults will have been immunised by mid-March, allowing the country to ease restrictions. Stephen Sackur interviews health minister Yuli Edelstein. Is Israel really the poster child for responsible and ethical coronavirus management?”

An audio version of the same interview was aired on BBC World Service radio the following day, January 27th.

“Israel is leading the world in the roll-out of the Covid-19 vaccine. More than a million Israelis have had their second dose, the prime minister claims the vast majority of adults will have been immunised by mid march, allowing the country to ease restrictions. Does the Health Minister, Yuli Edelstein, think Israel has shown responsible and ethical coronavirus management?”

The emphasis on “responsible and ethical” in both those synopses signposts the unnecessarily confrontational tone taken by Sackur throughout the interview – “but is Israel’s Covid response really such a positive story?”- which was often the basis for some distinctly pointless lines of questioning, for example on the topic of patient privacy in relation to the post-vaccination information shared with Pfizer.

However Sackur’s main interest in this interview – as expressed in his introduction – was obviously to add more BBC wind to the sails of the political campaign which opportunistically exploits the topic of vaccinations against Covid-19 to delegitimise Israel. [emphasis in italics in the original, emphasis in bold added]

Sackur: “And then there are the accusations that Israel is flouting international law in its refusal to offer the vaccine to millions of Palestinians living under Israeli military occupation. The Netanyahu government rejects the idea it has an obligation to do so but that is a position that has drawn fire from within the country as well as overseas.”

From 15:30 Sackur presented his partisan and embellished interpretation of ‘international law’ which completely ignored the relevant parts of the Oslo Accords but included the unevidenced claim that not only is Israel obliged to provide Palestinians who are not citizens of Israel with vaccines, but that it is obliged to do so at the same time as it vaccinates tax and health insurance paying Israelis.

Sackur: “Minister, international law says that you in Israel, as the military occupiers of millions of Palestinian people in the West Bank and in effect still in Gaza – though your armed forces are not on the ground in Gaza – you have a legal obligation under the Geneva Conventions to ensure that they get protected from Coronavirus, with the vaccine. Just as it becomes available in Israel it should be made available to those Palestinians living under your occupation as well. Why do you flout that international law?”

Sackur was clearly not interested in allowing his audience to hear any discussion on the topic of the applicability of the Geneva Conventions to the situation on the ground.

Edelstein: “Well we can get into long and interesting discussion, Stephen, about using the word occupation in this sense but I have to say…”

Sackur [interrupts]: “Well, well no we can’t really. Not under international law we can’t because it is quite clear that you still occupy, with your military, the West Bank. It’s quite clear.”

Edelstein: “It’s very nice to talk to an expert because I heard you hesitating about the Gaza Strip and I think to myself each time what else can we do not to be called occupants [occupiers] in Gaza when there is not a single Jew there?”

Sackur then proceeded to falsely claim that Israel controls “all access” to the Gaza Strip, which of course also has a border with Egypt.

Sackur: “Well that really isn’t the point. That really isn’t the point. Given that you control all access in and out. You control the land, the sea, the air access into Gaza. So in effect you’re still the occupiers there too. And I come back to this point. You might obfuscate but it is quite clear under international law – and a recent report from the UN office for human rights absolutely emphasises this – you have an obligation, an obligation under law, to deliver the vaccine to Palestinians under occupation. You are utterly failing to deliver on your obligation.”

Like too many of his colleagues before him, Sackur concealed from audience view the fact that that the “report” on which he apparently based his talking points was co-produced by a UN special rapporteur (rather than by the UNHRC itself) with a long record of anti-Israel bias.

Edelstein: “It’s Israel’s best interest to make sure that there is no surge in numbers among the Palestinians, that they start rolling the vaccination campaign. I am very happy to learn that they managed to secure some agreements with different companies. I know they’re getting something from the Russians, from AstraZenica, probably from Moderna and I’m very glad about it. They have, you know, their own health ministry and I’m sure that they will act accordingly. I do have to say that…”

As did his colleague Andrew Marr two days previously, Sackur then invoked a petition (published just four days after Israel began its vaccination roll-out) initiated by the political NGO ‘Rabbis for Human Rights’ without making any effort to inform audiences of that NGO’s political agenda or the fact that one of the petition’s signatories is the British Reform Rabbi he subsequently chose to quote separately.

Sackur [interrupts]: “I’m asking you about…I’m asking you about your legal and moral imperative. I’m not asking you whether Palestinians can eventually over the next six months get access to limited supplies from Russia. I’m asking you whether you’re prepared to meet your obligation: an obligation that 200 Rabbis with Human Rights [sic] have recognised in a joint statement. An obligation which a leading rabbi in the UK in the Reform movement, Laura Janner-Klausner, says ‘is so fundamental it goes to the core of who we are as Jews’. This is a moral as well as legal question. And are you prepared now to say to me Israel will meet that obligation?”

One can of course but wonder at Sackur’s sense of self-importance which apparently led him to believe that a minister serving in a democratically elected government would announce on-air a change to his government’s approach just because of some aggressive questioning from a TV presenter. Equally notable is Sackur’s reckless entry into a political and theological minefield with the none too veiled suggestion that anyone dissenting from the stance he promotes lacks the morals that define “who we are as Jews”.

Edlestein’s reply was however cut short when Sackur once again interrupted:

Sackur [interrupts]: “[…] I’m asking you whether you’re interested in following the advice of the rabbi who says you must meet your international obligation.”

Edelstein: “I read the letter of the rabbis. They’re not talking about the law. They’re talking about moral obligation and that’s exactly what I’m saying. Without any legal obligation, from the very first moment we were helping the Palestinians. Mind you, it’s not easy. They are not talking to us. They’re not establishing contact. They all the time go through third parties – something I can’t understand…”

Sackur [interrupts]: “Yeah, Minister, that’s not true. But that’s not true. The World Health Organisation reported that the Palestinians reached out to your department in early January to get vaccinations for their health workers. They asked for thousands. Apparently one hundred doses of vaccine were eventually delivered on humanitarian grounds. One hundred. Again, as a moral person, do you think that’s satisfactory?”

In fact the WHO representative in Jerusalem told the BBC on January 8th that his organisation – rather than “the Palestinians” as claimed by Sackur – “had some informal discussion asking whether at least some quantities could be relocated to vaccinate the health workers in the Palestinian territories” but the WHO had not submitted a formal request to the Israeli Ministry of Health at the time.

Edelstein: “There was not one case when the Palestinian health minister or someone from the health ministry contacted my office. Not one case since I’ve been minister of health. And I do have to say that having said all that, we are helping in every way we can. With medical equipment, with [unintelligible], with medicine and with some limited number of the vaccines to their medical staff that are working directly with Corona patients. As I have said many times, on many occasions, it’s our interest to make sure that they are vaccinated. I definitely don’t think that I can take the vaccines from the Israeli citizens and transfer them to the Palestinian Authority. But having said that, I’m optimistic that we’re talking about the speed of the vaccination campaign in Israel. I hope that very soon we’ll be able to talk to them – once they talk to us – and to offer our help on that issue too.”

Having invoked statements put out by two UN special rapporteurs, a political NGO and a British rabbi linked to that NGO as backing for his talking points, Sackur subsequently (from 21:06) added two US politicians – one of whom had been in office for all of three weeks at the time of broadcast – to his list of ‘authorities’.

Sackur: “Now we’ve had Democratic congressmen like Joaquin Castro say that Israel’s government has a clear responsibility under international law not just to Israel’s citizens but to Palestinians in the occupied territories when it comes to delivering the vaccine. Another one – another Democrat congressman Jamaal Bowman said ‘the cruelty of what is happening in terms of vaccine roll-out is another reminder of why the occupation must end’. […] Given the new atmosphere in Washington […] do you think it’s time Israel began to change its tone, change its attitude, and maybe you could start with the vaccines.”

Sackur’s repeated and exclusive framing of Israel’s approach to the issue of vaccinations for people who are not Israeli citizens as insufficiently ‘moral’ and contrary to its supposed ‘obligations’, together with his blocking of any discussion of the background to his pronunciations on ‘international law’, clearly shows that the aim of this interview was not to provide BBC audiences with information which would enable them to understand the issue. Once again, the BBC’s self-conscription to amplification of a political campaign prompted it to flout its own obligations to its funding public.