On the morning of April 27th the BBC News website published a 780-word report headlined “Israel committing crimes of apartheid and persecution – HRW” on its ‘Middle East’ page. 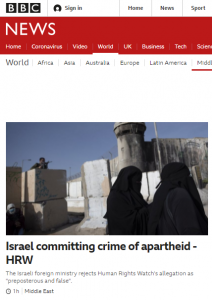 Well over half that report’s word-count is given over to uncritical amplification of the document released for publication on that day (with the BBC apparently having received advance copies) by the political NGO ‘Human Rights Watch’ (HRW). Five paragraphs present either direct quotes from the HRW document or quotes from the organisation’s executive director and three paragraphs are devoted to amplification of HRW’s interpretation of the term ‘apartheid’.

Nevertheless, the sole tepid description of HRW tells readers that it is an “international campaign group” and no information whatsoever is provided concerning its record of anti-Israel activity and ‘lawfare’.

Readers would hence be ill-equipped to make up their own minds with regard to the 39-word quoted statement from an official Israeli source:

“Israel’s foreign ministry has rejected the report as “preposterous and false”.

It accused the international campaign group of having a “long-standing anti-Israeli agenda” and carrying out an ongoing campaign “with no connection to facts or reality on the ground”.”

The only other dissenting opinion – presented to readers in 55 words at the end of the report – is that of Professor Gerald Steinberg.

“But Gerald Steinberg, founder of the Jerusalem-based group NGO Monitor, told the BBC that the report was part of a “vindictive vendetta… against Israel as the nation state of the Jewish people”.

He also said Human Rights Watch had chosen to “completely ignore and erase deliberately decades of terrorism and the need for counter-terror measures”.”

The BBC’s report presents two approving views of the HRW document in 70 words:

“It is urgent for the international community to intervene, including by making sure that their states, organisations, and companies are not contributing in any way to the execution of war crimes and crimes against humanity,” he said.”

In a section supposedly providing background to the story, the report promotes the BBC’s preferred  mantra on ‘international law’ with no alternative legal opinions presented. As usual, all history prior to June 1967 is erased from the BBC’s presentation and a simplistic claim concerning the UN’s approach to the Gaza Strip after Israel’s disengagement from that territory 16 years ago is presented.

Israel occupied the territories in the 1967 Middle East war. It pulled out of Gaza in 2005, but still controls most of its borders, as well as its airspace and waters off its coast.

More than 600,000 Jews live in about 140 settlements built in the West Bank and East Jerusalem. Most of the international community considers the settlements illegal under international law, though Israel disputes this.” [emphasis added] 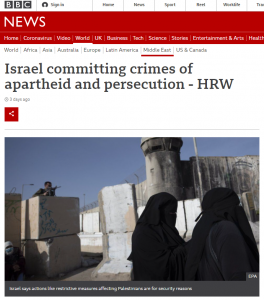 The report promotes two images, sourced from agencies, which have had their captions changed. The one at the top of the report carries the caption “Israel says actions like restrictive measures affecting Palestinians are for security reasons”. Inspection of that image using the right click option shows that its original EPA caption read “An Israeli soldier watches as Palestinian women wait to cross Qalandiya checkpoint to attend the first Friday prayer service of Ramadan at the al-Aqsa Mosque in occupied East Jerusalem (16 April 2021)”.

In other words, an image showing Palestinians on their way to worship in Israel has been framed as showing “restrictive measures”.

The second image – from Reuters – is captioned “Israeli Arabs often complain that they are treated as second-class citizens”. Very similar photographs by the same photographer – also taken in Umm al Fahm on March 12th 2021 – show that the people pictured are protesting “against a wave of violence in their communities, where they say police have turned a blind eye to crime”. That violence is largely linked to organised crime within the Arab sector.

The BBC’s report also includes a video by Tom Bateman dating from February 2020 and a video from 2015 in which Kevin Connolly interviewed then minister Tzipi Hotovely about the BDS campaign.

In line with past BBC promotion of assorted ‘reports’ by HRW concerning Israel, this article makes no attempt whatsoever to provide audiences with an impartial picture of that organisation or the “lead researcher” of this latest document.

THE GUARDIAN AND HRW: ALLIES IN THE DEMONISATION OF ISRAEL

THE TIMES CORRECTS ON ‘APARTHEID’ DEFINITION