In early April we noted that the screening of a documentary film that was aired on BBC Four in January had been postponed by the US broadcaster PBS after it was revealed that it included a fabricated quote. 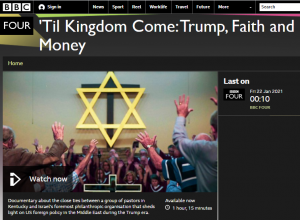 That documentary is still available to UK audiences on BBC iPlayer without any indication to audiences that it includes a fabricated quote and with no evidence of any editorial action having been taken. Its synopsis includes the following:

“This film traces this unusual relationship, from rural Kentucky to the halls of government in Washington, through the moving of the American Embassy in Jerusalem to the annexation plan for the West Bank.

With unparalleled access, the film exposes a stunning backstory of the Trump and Netanyahu administrations, where financial, political and messianic motivations intersect with the apocalyptic world-view that is insistently reshaping American foreign policy toward Israel and the Middle East.’

Moreover, at noon on May 20th – as BBC coverage of the then eleven day-old conflict between Israel and Hamas was still coming in thick and fast and just hours before the ceasefire was agreed – the BBC News website found it appropriate to re-promote that film in the ‘updates’ section of its ‘Middle East’ page. 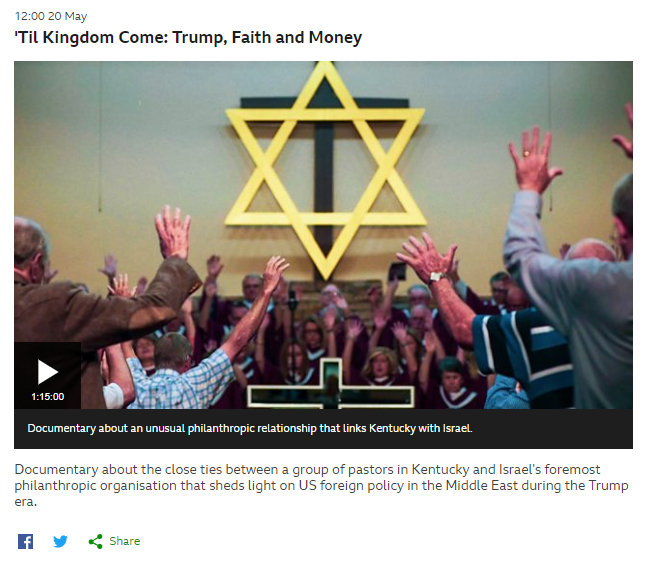 Obviously concerns about the film’s editorial integrity were less of a priority for BBC editors than the promotion of framing of an ongoing military conflict sparked by rocket attacks by terrorist organisations.