Throughout the day on June 20th visitors to the BBC News website’s ‘Middle East’ page found two reports relating to Israel and Iran. 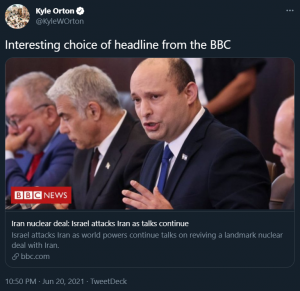 Both those reports open with the standard BBC amplification of Iranian denials concerning the purpose of its nuclear programme. 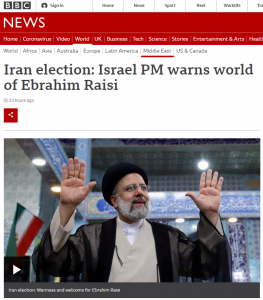 The second report does at least clarify that Israel is not alone in its assessment of the aims of the Iranian nuclear programme and that that was what brought about the JCPOA:

“Ayatollah Khamenei – Iran’s supreme leader – has repeatedly called for the elimination of the state of Israel. In 2018, he described the country as a “cancerous tumour” that had to be removed from the region.”

In the first article readers are told that:

“Israel does not believe that Iran’s nuclear programme is purely peaceful, and is convinced it is working towards building a nuclear weapon.

The 2015 Iran nuclear deal, which saw harsh penalties on Iran lifted as long as it stopped some nuclear work, collapsed when former US President Donald Trump abandoned the deal in 2018, and re-imposed the crippling economic sanctions. The Biden administration is now trying to work out a way to re-enter the deal.

In response to the sanctions being tightened, Iran stepped up its nuclear activities, and is currently enriching uranium at its highest levels ever – although still short of what is needed to make nuclear-grade weapons.” 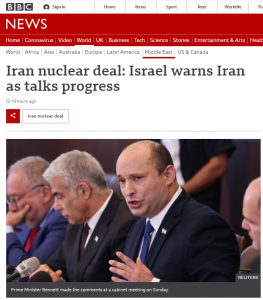 That last paragraph is echoed in the second report:

“The US national security adviser, Jake Sullivan, said there was “still a fair distance to travel” on issues including sanctions and on the commitments Iran needed to make. Iran is currently enriching uranium at its highest levels ever, although still short of what is needed to make nuclear-grade weapons.”

Neither report makes any effort to explain to BBC audiences what “still short” actually means.

Analysis of the May 31st 2021 IAEA Iran Verification and Monitoring Report provided by the Institute for Science and International Security includes the following:

Iran experimented with skipping typical enrichment steps as it enriched up to 60 percent uranium 235, going from a level below 5 percent low enriched uranium (LEU) directly to near 60 percent in one cascade, rather than using two steps, a slower process entailing the intermediate production of 20 percent enriched uranium. As such, Iran is experimenting with multi-step enrichment while seeking to shortcut the process, and is likely learning important lessons, all useful if Iran decides to break out and produce weapon-grade uranium. […]

Iran has enough LEU, in the form of 2 to 3 percent LEU and near 20 percent enriched uranium, to produce weapon-grade uranium (WGU) for three nuclear weapons without using any natural uranium as feedstock, a fact that reduces breakout timelines. […]

A worst-case breakout estimate, which is defined as the time to produce enough WGU for one nuclear weapon, is as short as 2.3 months. Iran could produce a second significant quantity of WGU early in the fifth month after breakout commences, and a third quantity could be produced early in the seventh month.”

Just two weeks prior to the appearance of these two reports the BBC reported warnings from the head of the IAEA concerning his organisation’s decreased ability “to provide assurance of the peaceful nature of Iran’s nuclear programme” due to Iran’s lack of cooperation with the UN body. Notably that report is neither mentioned nor promoted as a link or ‘related reading’ in either of the two articles that appeared on June 20th.