One of the main stories to come out of Operation Guardian of the Walls concerns the IDF’s destruction of tens of kilometres of Hamas-built underground tunnels in the Gaza Strip.

Media outlets including the Times, the Telegraph, the Washington Post and Deutsche Welle ran reports explaining that tunnel system (constructed at a cost of more than £150 million according to the Times) to their audiences.

BBC audiences saw no such feature informing them about the tunnel system known as ‘the Metro’ and references to it were found only in passing in general reports. For example:

“The Israeli military said it had conducted an operation overnight to destroy a network of Hamas tunnels that it dubbed “the metro”, but no troops had entered Gaza.” BBC News website, 14/5/21

“The Israeli military later said it had been conducted a strikes on a militant tunnel system in the area. The tunnels’ collapsed caused the houses above to collapse as well, leading to unintended civilian casualties, it said.” BBC News website, 16/5/21

“The Israeli military said more than 50 warplanes conducted a 20-minute attack on the Gaza Strip shortly before dawn on Monday.

They struck 35 “terror targets” and destroyed more than 15km (9.3 miles) of an underground tunnel network belonging to Hamas, it added.” BBC News website, 17/5/21

On May 17th the BBC News website’s live page devoted the grand total of 146 words to the topic, with the best it could offer as additional reading being an article from February 2015. 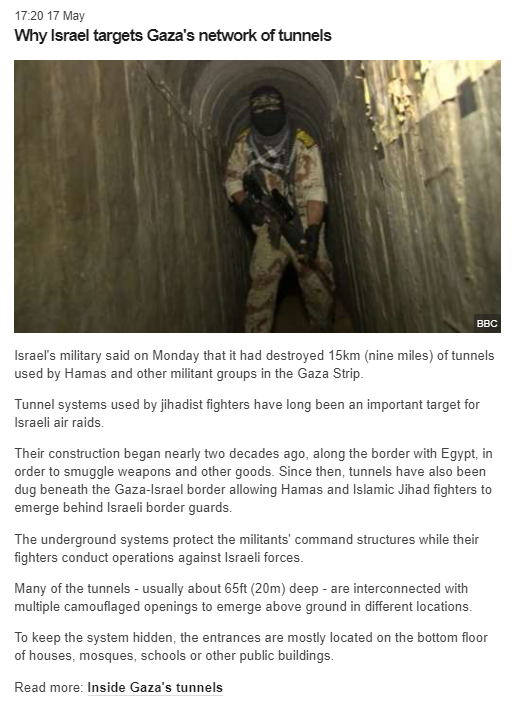 The BBC’s avoidance of any significant reporting on that tunnel system is especially notable in light of the fact that it did produce reports on civilian casualties which – as BBC journalists know – resulted from the collapse of buildings above the tunnels that Hamas had constructed in recent years.

It is also noteworthy because following the 2014 conflict, the BBC ignored Hamas’ previous misappropriation of construction materials for the purpose of tunnel building and the related failure of supervisory international bodies to ensure that those materials went solely to civilian construction projects.

Despite a UN monitored mechanism to prevent building supplies being hijacked for terror purposes having been introduced in October 2014, there was plenty of evidence that that was exactly what was happening and yet the BBC chose to repeatedly close its eyes to that story and its outcome.

With attentions now focused on yet another Gaza reconstruction project, BBC audiences’ (including politicians) understanding of that topic would of course be enhanced were they at long last informed not only how and why the previous supervisory mechanisms failed to prevent Hamas from rehabilitating and expanding its terrorism infrastructure but also what such infrastructure entails and why it guarantees that the next round of conflict is merely a matter of time.

EVEN THE GUARDIAN GOES WHERE THE BBC REFUSES TO TREAD