Nearly a week has passed since BBC Monitoring employee Tala Halawa’s attempt to downplay an antisemitic slogan on the BBC News website led to the exposure of her own antisemitic social media posts from 2014.

Courtesy of Sussex Friends of Israel, we learn that the May 28th edition of ‘Newswatch’ – aired on the BBC News channel and BBC One – included an item relating to that topic. 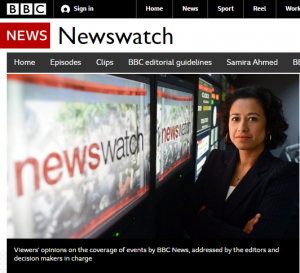 “…the recent hostilities in Israel and Gaza have been accompanied by a passionate debate about how fairly the news media – including the BBC – have reported the conflict. That debate was reignited last weekend when a series of Tweets emerged written by Tala Halawa, a journalist for BBC Monitoring. They were posted in 2014 when she was working for a Palestinian radio station and one made offensive comments about Israel and Hitler. […]

Well last autumn the BBC issued new guidances to staff on their use of social media and we wanted to talk to someone about this case in that context. They told us that wasn’t possible and there was an investigation ongoing and gave us this statement:”

In other words, although the BBC has been claiming for a week that it is investigating Halawa’s social media posts, it refused to provide comment to one of its own programmes which purports to bring audiences “Viewers’ opinions on the coverage of events by BBC News, addressed by the editors and decision makers in charge”.

Does the BBC really believe that decision convinces its funding public that it is takes either antisemitism within its own ranks or its own guidance on employees’ social media use “extremely seriously”?

On June 11th the Jewish Chronicle reported that:

“After Ms Halawa’s tweets were brought to light last month, the BBC launched an investigation.

Today, a senior corporation source confirmed that the investigation had concluded, adding: “This individual no longer works for the BBC.””

Nevertheless, the abovementioned report by Halawa is still available online.