Previously we looked at points arising from the first hours of BBC Radio 4 coverage of the May 10th Hamas rocket attacks on Jerusalem and additional locations and the Israeli response.

Among those points were:

1) The BBC’s failure to clarify to its audiences that the Gaza Strip casualty figures it quoted were supplied by the same terrorist organisation that instigated the violence and was, as BBC journalists spoke, still attacking Israeli civilians.

2) The BBC’s failure to carry out basic fact-checking and independent verification before widely promoting the inaccurate claim that nine children had been killed in the Gaza Strip by Israeli fire during the first hours of the conflict. In fact, at least eight of the children and some of the adults who died on May 10th – including members of the al Masri family in Beit Hanoun – were killed by rockets launched by Palestinian terror organisations.

3) The use by BBC journalists of the politically motivated, PLO recommended terminology ‘al Aqsa Mosque compound’ rather than Haram al Sharif or Temple Mount as stated in the BBC News style guide.

4) The failure to provide audiences with an accurate and impartial account of the property dispute in Sheikh Jarrah.

5) Whitewashing or downplaying of the pre-planned violent rioting by Palestinians on Temple Mount on the morning of May 10th (and previous days) and promotion of the false claim that Israeli security forces attacked peaceful worshippers.

6) Insinuation of Israeli disrespect for Islam by means of false allegations of attacks on Muslim worshippers during “the holy month of Ramadan”.

Eight hours later, on the morning of May 11th, BBC Radio 4’s ‘Today’ programme – presented by Justin Webb and Mishal Husain – saw multiple repetitions of those themes and the appearance of others. 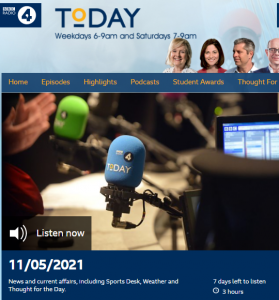 Two minutes into that programme, listeners heard a news bulletin. [emphasis in italics in the original, emphasis in bold added]

Newsreader: “There have been international calls for an end to the escalating violence between Israel and the Palestinians. Palestinian officials say that 20 people including 9 children were killed when Israel carried out airstrikes in the Gaza Strip. The Israelis say that they were responding to a series of rocket attacks from the territory. […] Rifat al Masri was at home in Gaza with his family waiting to break their Ramadan fast when the Israelis carried out the strikes.”

BBC audiences were not told at the time – and have not been informed since – that “Mohammed” was 20-year-old Mohammad Ali Mohammad Nosseir (see p. 8 here) who, along with one of the other adults killed in that incident in Beit Hanoun that was caused by errant Palestinian rocket fire, was a Fatah activist.

At 10:47 minutes into the programme, Mishal Husain told listeners that:

Husain: “Now several days of violence in and around the al Aqsa Mosque compound have now widened into exchanges between Israel and Hamas in the Gaza Strip. Rockets were fired into Israeli territory from there and Palestinian officials say Israeli airstrikes on Gaza killed 20 people including children.”

Bateman: “A mother’s uncontrollable grief after learning she had lost three of her children.”

It is all too obvious that no independent verification was conducted before BBC Radio 4 producers chose to repeatedly promote that inaccurate account of the previous evening’s events in Beit Hanoun.

Bateman went on to give a confusing and misleading account of events on Temple Mount which failed to explain the chain of events.

Bateman: “The Palestinian rocket fire followed fierce clashes around al Aqsa Mosque in Jerusalem. Heavily armed Israeli police entered the compound – holy to both Muslims and Jews – firing stun grenades and rubber bullets at Palestinians who threw stones and other objects at them.”

In another news bulletin at 1:02:20 audiences were told that:

Newsreader: “Clashes between Israel and the Palestinians have continued this morning following an upsurge in violence yesterday. Reports say two Palestinians were killed and six Israelis wounded in the latest attacks. More than 20 Palestinians – including children – were killed in Israeli airstrikes on Gaza yesterday. The escalation follows days of tension in Jerusalem from where Yolande Knell reports.”

Knell’s account of the pre-planned violence instigated by rioters armed with rocks and other means was as vague and unhelpful as that of her colleague.

Knell: “Hamas said it was acting to defend al Aqsa Mosque after the site – which is holy to Muslims and Jews – had seen violent clashes between Israeli security forces and Palestinians.”

Another news bulletin at 2:02:50 included the same report by Knell, preceded by this:

Newsreader: “Clashes between Israel and the Palestinians have continued this morning following an upsurge in violence yesterday. The Israeli army said it had struck 130 military targets in Gaza, killing 15 members of the ruling Hamas group. Palestinian health authorities have put the number of dead from Israeli airstrikes at 22, including 9 children.”

In addition to all that repeated promotion of what is actually Hamas messaging framed as casualty reports, listeners heard more of the terrorist organisation’s talking points straight from the BBC Middle East editor’s mouth in a conversation with Justin Webb (who managed to gloss over the fact that Israeli villages, towns and cities were being attacked by terrorists) from 1:15:12.

Webb: “There’ve been calls from around the world for the violence in the West Bank, Gaza and East Jerusalem to be brought to a halt before it leads to an all-out Palestinian-Israeli conflict.”

Partway into that conversation Webb and Bowen resurrected another theme promoted by the BBC whenever violence erupts: the notion of ‘disproportionality’.

Webb: “It’s interesting – isn’t it? – when you look at these rocket attacks on Israel from Gaza; a huge number of rockets; an attack that any state presumably has to respond to in some way. The question is the extent of the response, the proportionality, I suppose.”

Bowen: “Well it is from the Israeli point of view and sometimes they deliberately respond in what they would deny but what is a disproportionate manner. But you know Palestinians hearing your question would say well hang on a minute; actually we’re acting in self-defence is what they would argue…”

BBC domestic audiences were of course not informed what the principle of proportionality in warfare actually means.

Bowen went on to claim that the scheduled PA elections had been cancelled by Mahmoud Abbas because “the Israelis wouldn’t let them have elections for Palestinians inside Jerusalem as well”. In fact – as reported at the time – Israel never formally told the Palestinians whether it would permit the vote to take place in Jerusalem.

Bowen: “…the Palestinians would argue that actually they’re on the rough end of Israel’s policies of…ah…settlement colonialism…ahm…making Jerusalem more of a Jewish city and that these are actions of self-defence.”

Part two of this post will look at two interviews with outside contributors also heard by listeners to this programme.

BBC RADIO 4 DUSTS OFF THE ‘EXPERT’ HATS AND ‘DISPROPORTIONATE’ MEME