Long-time readers will be only too familiar with the BBC’s well-established record of failing to accurately report the often tragic consequences of rockets fired by terrorist groups in the Gaza Strip which fall short of the border.

WHY DOESN’T THE BBC TELL AUDIENCES ABOUT GAZA’S SHORTFALL MISSILES?

Although some 680 of the 4,360 rockets fired by terrorists in the Gaza Strip between May 10th and May 21st fell inside the Gaza Strip, BBC audiences have seen no significant coverage of that topic.

Relatedly, the BBC has done little to enhance audience understanding of the casualty figures provided by Hamas’ ministry of health which are quoted and promoted in its extensive reporting.

As the BBC has known for years, Hamas deliberately avoids distinguishing between combatants and civilians in the statistics it puts out to the foreign press. It likewise attributes all casualties to Israeli actions, whether or not that is in fact the case. Nevertheless, this time too audiences have seen little effort made by the BBC to independently verify the Hamas-supplied figures it unquestioningly amplifies.

One such example is seen in a BBC report from May 12th titled “Israel-Gaza: Locals scramble for cover, some hiding in wardrobes”.

“One family in northern Gaza has lost five members who were killed by an Israeli air strike, including two young brothers who were filling sacks of straw at the time.

“We were laughing and having fun when suddenly they began to bomb us. Everything around us caught fire,” their 14-year-old cousin, Ibrahim, told AFP news agency, breaking down in tears as he described their death.” [emphasis added]

That incident took place on the evening of May 10th. The BBC reported that:

“Israel has launched air strikes against militant targets in the Gaza Strip, after rockets were fired from the territory towards Jerusalem.

The Hamas-run Palestinian health ministry in Gaza said 20 people, including children, had died in the strikes.”

Listeners to the BBC World Service radio programme ‘Newshour’ on the evening of May 10th were also told that the fatalities – including children – were caused by Israeli airstrikes (from 50:16 here). 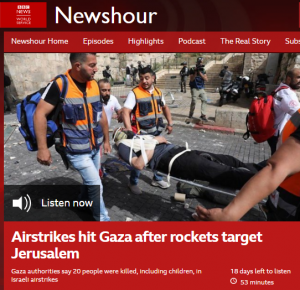 Tim Franks: “…Palestinain officials saying that at least 20 people have been killed in Israeli airstrikes on Gaza…”

Rushdi Abualouf: “The latest from the ministry of health in Gaza: the number has increased to 22 people […] nine children were killed.”

The next day BBC audiences were informed that:

“The Hamas-run health ministry in Gaza reported that at least 28 Palestinians, including 10 children, had been killed in Israeli strikes and more than 150 others had been injured.

Victims included a 59-year-old woman and her disabled son and seven members of one family, including three children, in Beit Hanoun.”

On May 19th the BBC News website published a feature headlined “Israel-Gaza violence: The children who have died in the conflict” by Jack Hunter, Alexandra Fouché & Angy Ghannam. 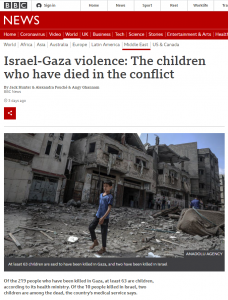 One of the children appearing in that feature is Ibrahim al-Masry, aged 14, from Beit Hanoun.

“Ibrahim al-Masry was playing with his siblings in the front yard of their home in a northern neighbourhood of Gaza last week, when a strike hit, according to reports.

Ibrahim and his brother Marwan, and several other relatives, were instantly killed.

“Every day in Ramadan they play in the street at this time before Iftar,” their father, Youssef al-Masri, told The Independent.

“We didn’t see it coming, we just heard two big explosions… Everyone was running in the street, children were bleeding, mothers were crying, blood was everywhere.”

Their brother [sic- actually cousin], also called Ibrahim, said they had been filling sacks of straw to sell at a local market.

“We were laughing and having fun, when suddenly they began to bomb us, everything around us caught fire,” he told the AFP news agency.

“I saw my cousins set alight, and torn into pieces.”” [emphasis added]

Readers would obviously understand from that account that Ibrahim and Marwan al-Masry (also al-Masri) were killed by an Israeli airstrike. However that was not the case.

The IDF investigated that incident in Beit Hanoun in which six children under 18 and two adults were killed. It was found to have been caused by shortfall rockets fired by terrorist groups.

“Israeli military officials say a mysterious explosion that killed eight members of a Palestinian family on the first day of the current round of fighting in the Gaza Strip was caused by a misfired Palestinian rocket, not an Israeli airstrike. […]

A senior military officer says the incident was investigated, and Israel did not strike the Beit Hanoun area where the family members were killed that night.”

The IDF also investigated an additional incident that took place around the same time in Jabaliya in which four children aged 18 and under and four adults died. That too was found to be the result of a rocket fired by Palestinian terrorists. The NGO ‘Defence for Children International’ described that incident as having been caused by “a homemade rocket fired by a Palestinian armed group”.

If the BBC’s previous record is anything to go by, it is highly unlikely that audiences will be relieved of the inaccurate impression that Ibrahim al-Masry and other members of his family were killed by an Israeli airstrike.

As has so often been the case in previous escalations, the BBC continues to uncritically amplify casualty figures which are part of Hamas’ framing of the story without any evidence of the type of independent verification that responsible, accurate and impartial journalism requires having taken place.