The same signposting regarding the supposedly ‘controversial’ nature of that law was evident in the opening lines of all versions of the report: 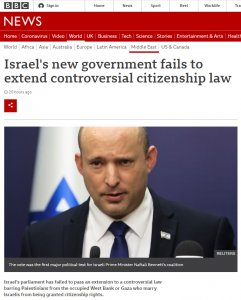 “Israel’s parliament has failed to pass an extension to a controversial law barring Palestinians from the occupied West Bank or Gaza who marry Israelis from being granted citizenship rights.”

In the fourth paragraph, readers were told that in addition to being ‘controversial’, the law is also deemed ‘discriminatory’.

“The legislation, which critics say is discriminatory, will expire at the end of Tuesday unless there is a new vote.”

So towards whom is the Citizenship and Entry into Israel Law supposedly discriminatory? Well, certainly not towards Israeli nationals because it applies equally to all Israeli citizens regardless of religion or ethnicity.

Neither is it ‘discriminatory’ towards Arabs or Palestinians because, as explained by the MFA in 2005, the law:

“…does not prevent any Israeli citizen, from uniting in Israel with spouses from Arab or Palestinian origin, who do not reside in the West Bank or Gaza Strip. The criterion is only whether the spouse is a resident of the West Bank or Gaza Strip. It should also be noted that a State has the right to control entry into its territory, and more so, during times of armed conflict, when persons requesting to enter may potentially be involved in acts of violence against its citizens.”

(The law was amended in 2007 to include citizens from Iraq, Iran, Syria and Lebanon, which are defined as enemy states).

The only context provided comes much later in the BBC’s report:

“The Citizenship and Entry Law was originally passed in 2003, at the time of the second Palestinian intifada, or uprising, when Palestinian militants were carrying out attacks inside Israel.

The authorities have renewed it every year since, citing security reasons.”

The BBC refrained, however, from providing readers with the ‘missing link’ that explains the connection between the second Intifada and the 2003 law.

“Since the outbreak of the armed conflict between Israel and the Palestinians towards the end of the year 2000, which led, inter alia, to the commission of dozens of suicide bombings inside Israel, a growing involvement in assisting terrorist organizations had been noted on the part of Palestinians originally from the West Bank and Gaza, who carry Israeli identity cards pursuant to procedures of family unification with Israeli citizens or residents; and who abuse their legal status in Israel, which allows them free movement between the West Bank and/or Gaza and Israel.

In order to prevent such potential danger posed by former residents of the West Bank and the Gaza Strip during the current armed conflict, the Government decided in May 2002 to temporarily stop granting them legal status in Israel, including through family unification. The decision was adopted following a horrendous terror attack in Haifa in March 2002 killing 15 people, committed by a suicide bomber who received Israeli ID following family unification.” [emphasis added]

As reported by the Times of Israel:

“Since the Oslo Accords between Israel and the Palestinians were signed in the early 1990s, Israel had granted residency or citizenship to an average of 12,000 Arab Israelis per year for family reunification, including children.

Among them was Shadi Tubasi, a Hamas member who had married an Arab Israeli woman. In March 2002, he killed 16 Israelis and wounded 40 more when he blew himself up at a Haifa restaurant. Tubasi had timed his brutal bombing with care: the tables were packed with diners celebrating the Passover holiday, making the attack one of the bloodiest of the Second Intifada.

Authorities saw Tubasi’s blue Israeli identity card as a significant asset in his ability to carry out the attack despite heightened security vigilance.

In the aftermath of the bombing, the Interior Ministry immediately froze the reunification process, saying that they feared further attacks by naturalized West Bank Palestinians. A year later, the stoppage was codified into a temporary law with a yearly sunset provision. […]

In 2003, the state told the High Court that 23 Palestinians who had received citizenship or residency through family reunification had “provided meaningful assistance in hostile activity against state security” during the Second Intifada.” According to the Israeli government, 45 Israelis were killed and 124 Israelis were wounded in attacks in which those Palestinians were involved.”

That relevant context is completely absent from the BBC’s report, which goes on to unquestioningly promote a second-hand quote from a person affected by the law:

“An Israeli Arab who attended a protest outside parliament on Monday said his family had been confined to a “continuous prison” as a result of the law.

“I am asking for rights that the state owes us… for my wife to have Israeli ID, residency rights and freedom of movement,” Ali Meteb told AFP news agency.” [emphasis added]

The BBC’s article made no effort to clarify that other countries – including Britain, as it reported in 2017 in the case of Prince Harry’s then fiancée – do not grant the ‘right’ of automatic citizenship to spouses of their own citizens, not least those from enemy territories.

Such context is obviously essential, especially in a report which promotes allegations of ‘controversy’ and ‘discrimination’.