Listeners to BBC Radio 4 News on the evening of August 14th heard an item introduced as follows (from 09:26 here) by newsreader Charles Carroll: [emphasis in italics in the original, emphasis in bold added]

Carroll: “The filmmaker and Left-wing activist Ken Loach has said that he’s been expelled from the Labour party after refusing to disown several groups who were also removed last month. The 85-year-old, who was a prominent supporter of the former leader Jeremy Corbyn, claims he’s the victim of a witch hunt and a purge. Our political correspondent Tony Bonsignore has more details.”

Listeners were not told that the word ‘disown’ was Loach’s choice of terminology. 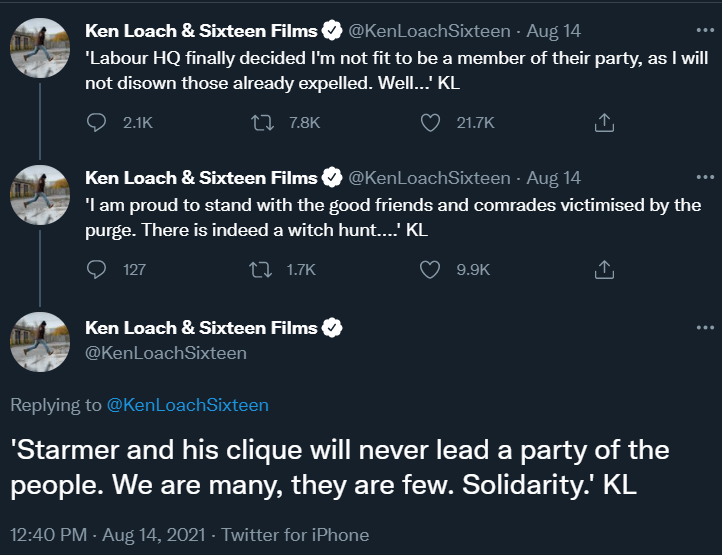 Neither were they informed of the significance of the use of the term ‘witch hunt’ by Loach and the fact that one of the “several groups” (four) that, as the BBC reported in July, were “proscribed by Labour’s National Executive” was one called ‘Labour Against the Witchhunt’ (LAW) which lists Loach as a sponsor.

That group describes itself as having been “founded in October 2017 to oppose the purge of pro-Corbyn supporters in the Labour Party”. It opposes the Labour party’s adoption of the IHRC working definition of antisemitism and it claims that antisemitism allegations are politically motivated.

That obviously essential context was also omitted from the contribution by the BBC’s political correspondent, who chose to open with a selected recording from one of Loach’s films. 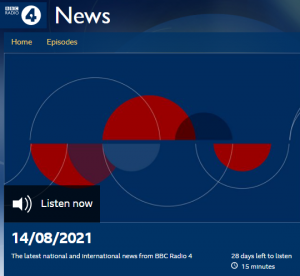 “If you’re not like the others, if you simply don’t belong, then you have to manage alone. Unless you have a friend. Like Kes.”

Bonsignore: “An extract from Ken Loach’s iconic 1969 movie ‘Kes’ about a working-class boy with few prospects finding solace in a stolen kestrel. It would help launch a directing career that would see the life-long socialist hailed as a master of realist cinema and become a totemic figure on the Left of the Labour party.”

Bonsignore then made a euphemistic reference to “colleagues” which – like his whitewashed portrayal of ‘Labour Against the Witchhunt’ as merely “critical” – does not help listeners trying to understand the story.

Bonsignore: “Today though Ken Loach revealed on social media that he’d been expelled from Labour for refusing to disassociate himself with colleagues also recently kicked out. They included some who’d been critical of the current leader’s attempts to tackle antisemitism within the party. Ken Loach’s own views on the issue have previously been called into question. In 2017, when asked in a BBC interview whether discussions about Holocaust denial were unacceptable, he said history was for all of us to discuss.”

Bonsignore’s portrayal of part of that 2017 interview also does not tell the whole story.

“…in the span of two minutes on public television, this leading leftist light managed to (a) deny clear and documented instances of anti-Jewish bigotry, (b) claim that Jews fabricate anti-Semitism to manipulate others, (c) refuse to condemn Holocaust denial, and (d) justify such bigotry against British Jews with wild hand-waving at completely different Jews in the Middle East.”

Bonsignore closed his report with amplification of a Tweet from a person who held a senior position in Labour throughout the years that were the subject of the EHRC’s investigation into antisemitism within that party.

Bonsignore: “In his series of Tweets today, he accused Sir Keir Starmer of operating a clique which, he claimed, would never lead a party of the people. Others on the Left also weighed in. The former shadow chancellor John McDonnell said the decision to expel him was a disgrace. Labour told the BBC it didn’t comment on individual cases.”

Clearly this BBC report did nowhere near enough to provide BBC audiences with the information needed to understand why the Labour party has reportedly parted company with a man whose own record of antisemitism is well documented and who apparently refuses to disassociate himself from an extremist group already expelled for being “not compatible” with the party’s values, despite presumably knowing that membership of that group and others was declared grounds for removal from the Labour party last month.