The Guardian published yet another report from Gaza focusing on Palestinians ‘civilians’ killed during the May war between Hamas and Israel.  (The reason we placed the word civilians in scare quotes will become apparent.)  The article, “Among ruins of bombed city towers, Gazans still reel from shock and pain”, Aug. 15, by Middle East correspondent Bethan McKernan, focuses on what’s characterised as “the deliberate targeting of high-rise tower blocks, all of which were home to civilians and offices”.

However, though she quoted an IDF Spokesperson explaining that “terrorist organisations intentionally place military assets in the heart of densely populated areas”, she didn’t do due diligence when detailing the deaths of individual Palestinians as the result of the IDF’s bombing of putatively civilian homes.

A case in point follows, where the journalist devoted the last paragraphs of the article to the fate of the Hamid family in Beit Hanoun.

In Beit Hanoun, a dusty town near the strip’s northern border, the Hamid family lost 34-year-old Raed, one of six sons, in May. He had been asleep in a room on the second floor of the large family home when an Israeli shell ploughed through the roof, destroying the back of the house and starting a fire that consumed much of what was left.

“We already lost our house in the 2014 war,” said Zakaria Hamid, 65, Raed’s father. “We rebuilt as three separate houses after that, lower structures. We thought if some of us were going to die, at least it wouldn’t be all of us.”

However, as reported by the Meir Amit Intelligence and Terrorism Information Center, Ra’ed was active in the military wing of of the Popular Front for the Liberation of Palestine (PFLP) terror group. 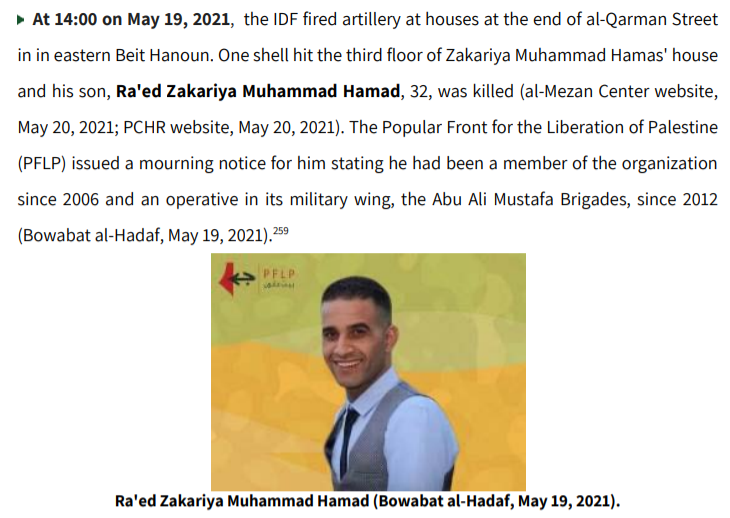 You can see the PFLP’s announcement of the death of their ‘comrade’ here. The following is a translation (by CAMERA Arabic) of the opening sentence of the announcement.

“PFLP has announced the passing of its comrade, warrior Ra’ed Zakariyah Muhammad Hamad, on Wednesday. He became a martyr today, as the criminal occupation’s rocket shell was aimed directly at him, amidst its ongoing aggression against our people.”

Further, contradicting the Guardian’s narrative of disproportionate force, according to the pro-Palestinian NGO Al Mezan, no actual civilians were killed in the bombing of the ‘civilian building’ that killed Hamad.

We’ve complained to Guardian editors about the omission.