On August 31st the BBC News website published a report headlined “Cyprus on alert as Syrian oil slick spreads across Mediterranean” on its ‘Middle East’ page. In its opening lines readers were told that: [emphasis added] 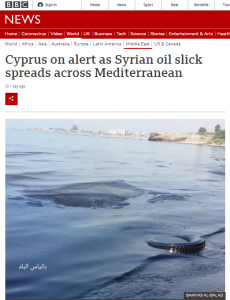 “Authorities in Cyprus are monitoring an oil slick that originated from a power plant on Syria’s Mediterranean coast and could soon affect the island. […]

Modelling suggests that it will reach the Karpas Peninsula in the Turkish-controlled north on Tuesday.

The prime minister of Turkish-controlled northern Cyprus said it was taking all necessary measures to prevent the slick causing damage and was receiving assistance from Turkey.”

Later on the report states:

“The Cypriot government issued a warning about the slick on Monday in response to new satellite imagery showing that it had grown in size and was close to Cape Apostolos Andreas.

The cape is the north-eastern most point of the Karpas Peninsula, which is in the self-declared Turkish Republic of Northern Cyprus (TRNC) and is about 130km (80 miles) from Baniyas. […]

The TRNC’s Prime Minister, Ersan Saner, said the spill’s progress was being followed closely by his office and all relevant ministries and organisations in co-operation with Turkey, which is the only country to recognise the north as an independent state.”

In other words, the BBC fully understands that Turkey’s 1974 invasion of the northern part of the island is not accepted by any other state or by the UN. A European Parliament briefing describes the situation as follows:

“…the Turkish army occupied 37% of the island’s territory. A cease-fire was declared on 18 August 1974, confirming the partition of the island. The period that followed was characterised by territorial occupation, loss of life, flight by sections of the population and destruction of the cultural heritage. In November 1983, the illegally occupied zone proclaimed itself the ‘Turkish Republic of Northern Cyprus’ (TRNC), illegally in the eyes of the United Nations Security Council.”

Moreover, since Cyprus joined the European Union in 2004, the EU regards the whole of the island as “EU territory”.

Nevertheless, as is uniformly the case in BBC reporting on the topic of Cyprus (see ‘related articles’ below) the corporation avoids the use of terms such as ‘occupation’ and ‘international law’ which are equally inevitably seen in BBC coverage of the Palestinian-Israeli conflict. Readers do not find any pronouncements pre-emptively allocating disputed territory to one side or the other in the style of the frequently employed phrases “occupied Palestinian land” and “Palestinian territory”.

As we have noted here in the past, the BBC is able to report on the long-running conflict in Cyprus in a manner which refrains from promoting a particular political narrative. That editorial policy continues to stand in sharp contrast to the corporation’s chosen framing of territorial disputes involving Israel.

NOT ALL ‘OCCUPIED TERRITORIES’ ARE EQUAL FOR THE BBC