Previously (see ‘related articles’ below) we have discussed five videos created by the BBC in 2004 (and still available in the UK) within the framework of its ‘Bitesize’ online study support resource which includes material relating to the GCSE exams taken by high school students in parts of Great Britain and Northern Ireland.

One of the sections offered under the history category is titled ‘The Middle East class clips’ and it includes seven videos. The sixth video (chronologically) is titled “Sabra and Shatila massacres in 1982”. 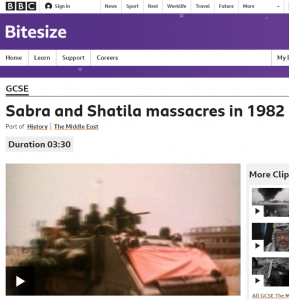 Like the previous videos, this one too is presented by the former BBC Northern Ireland journalist Noel Thompson. The outside contributors to this video are Amram Mitzna – presented as “Head of the Israeli Defence Force Central Command 1986 – 1990” – and Yezid Sayigh – presented as “Professor, Centre for International Studies, Cambridge University” – who appeared in some of the earlier films. Once again the fact that Sayigh has advised and represented the Palestinians in the past is not revealed to viewers of these videos aimed at 14 to 16 year-olds.

The third contributor to this BBC educational film is a journalist. The late Robert Fisk – who is presented as “Middle East correspondent, the Independent” – had established his anti-Israel animus well in advance of his participation in this BBC production but nevertheless was chosen to appear as one of the supposedly neutral ‘experts’ explaining Middle East history to British schoolchildren.

The video’s synopsis promotes highly debatable claims made by Sayigh concerning the PLO and a clear biblical analogy.

“The Israeli invasion of Lebanon in 1982 was intended to locate and expel the PLO. The invasion changed the intensity of conflict, argument and distress between Jews and Arabs in the region. Whilst the PLO were now fast becoming a more credible negotiating partner, the massacre of innocents in the Sabra and Shatila refugee camps in 1982 by Christian Phalangists altered the feeling and trust between the two sides in the search for a peace protocol. There were angry scenes in the Knesset, Israel’s parliament and Sharon was forced to explain his actions to a packed Knesset. Expert commentary is provided by Amram Mitzna, Yezid Sayigh and journalist Robert Fisk.”

Moreover, the BBC’s suggestions for ‘Classroom Ideas’ assume that British 14 to 16 year-olds would have sufficient knowledge of a decades-old complex conflict thousands of miles away to judge the accuracy of “expert commentators”.

“Students may benefit from listening closely to what’s said by the expert commentators with consideration as to what evidence there is to support their argument. Who has the strongest argument? Are students able to find any more evidence to support each of the commentators?”

The video opens with Thompson inaccurately describing terrorists responsible for hundreds of attacks against civilians as “guerrillas”. [emphasis in italics in the original, emphasis in bold added]

Thompson: “A year later the region was plunged into conflict again when Israel pursued the PLO which set up base in Lebanon. The Israelis invaded, claiming they wanted to wipe out the Palestinian guerrillas who were attacking Israel.”

Mitzna: “Militant Palestinian terror organisations used this area in order to invade, in order to sabotage, in order to implement terrorism on the State of Israel. And therefore the invasion was a necessity. I thought and many Israelis thought that it was a necessity to go in, to destroy all the infrastructure of terrorism and then to go back, to pull out our forces.”

No attempt is made to provide viewers with details of the events which led to what was originally known as ‘Operation Peace for the Galilee’, including the PLO’s entrenchment in southern Lebanon, the Lebanese civil war, the attacks against Israeli civilians launched by the PLO from Lebanon, the failure of UNIFIL (established in 1978) to prevent such attacks and the attack on the Israeli ambassador to the UK.

With such relevant information excluded from the BBC’s portrayal, viewers then see the following distortion of events:

Sayigh: “The government of the Right-wing Menachem Begin at the time in 1982 feared above all not the military threat posed by the PLO – because there’d been a ceasefire in fact on the border – but the political threat that the PLO was now becoming a respectable negotiating partner and he would have to sit down and negotiate and therefore give up the occupied territories and accept Palestinian statehood. And this he was unwilling to do and that is why, fundamentally why, the Israeli government of that day invaded Lebanon and caused the deaths obviously of many thousand people and expelled the PLO.”

While a ceasefire had been brokered in July 1981 following the shelling of civilian communities in the Upper Galilee, it did not bring an end to Palestinian attacks, as Reuven Erlich explains:

“The “two-week war” (July 10 – 24, 1981): the process of escalation between Israel and the Palestinian terrorists led to an intensive clash in the summer of 1981. For the first time, the terrorists heavily shelled Kiryat Shmona with artillery and Katyusha rockets, taking advantage of the military capabilities they had built up in southern Lebanon. The reactions of both sides escalated during the clash: the Israeli air force raided terrorist headquarters located in the middle of populated areas in Beirut, while the terrorists intensively shelled populated areas in the Galilee Panhandle, leading to the abandonment of Kiryat Shmona and a severe disruption of normal life in northern Israel. […]

The fighting ended on July 24 with a controversial ceasefire agreement between Israel and the PLO brokered by Philip Habib, the American envoy. The agreement called for the cessation of hostilities directed at Israel from Lebanon.

The PLO interpreted the agreement in its strict sense, claiming that it required the Palestinian organizations to refrain from launching attacks against Israel from Lebanon, but not from other sectors (and such terrorist attacks did, in fact, continue). Israel, on the other hand, interpreted the agreement as a total commitment to the cessation of Palestinian terrorism, and was unwilling to sit idly by while it continued to suffer terrorist attacks in other sectors, initiated and planned by the terrorist headquarters in Lebanon. Thus, the controversial agreement created a volatile situation where a terrorist attack outside of Lebanon could have ignited the Lebanese powder keg. The countdown to the First Lebanon War began.”

The Jewish Virtual Library notes that:

“The PLO repeatedly violated the cease-fire over the ensuing 11 months. Israel charged that the PLO staged 270 terrorist actions in Israel, the West Bank and Gaza, and along the Lebanese and Jordanian borders. Twenty-­nine Israelis died and more than 300 were injured in the attacks.”

There is of course no evidence to support Sayigh’s claim that in 1982 the PLO “was now becoming a respectable negotiating partner” and no negotiations were on the table at the time.

Fisk: “Ariel Sharon said that there would be limits to this invasion: it would only go a few kilometres up the coast and stop. But as we now know from Sharon himself and others, the intention was to capt…to surround the PLO in Beirut and capture them and kill Arafat. Well they did surround Beirut. They went all the way and it turned into a catastrophe for everybody.”

An interview given by Ariel Sharon in 2002 refutes Fisk’s claim that the intention was to “kill Arafat”.

Thompson: “The catastrophe was the massacre of hundreds of Palestinians in the Sabra and Shatila refugee camps near Beirut. The killers were Israel’s Lebanese allies the Christian Phalangists.”

Viewers hear nothing of the relevant background of the assassination of the Lebanese president Bachir Gemayel two days beforehand or of the long history of Palestinian militias’ killings of Christians in Lebanon.

Fisk: “Ariel Sharon was fixated with the idea there were terrorists – quote unquote – in the camp and in fact the Palestinians who were slaughtered there were all civilians. And this massacre stained the reputation of Israel for years to come.”

Fisk’s use of the word “fixated” clearly does not enhance viewers’ understanding of the fact that there were indeed armed PLO militiamen in the camps. Only at this point do viewers see the onscreen caption: Robert Fisk – Middle East Correspondent “The Independent”.

Fisk: “It led inevitably to an inquiry by the Israelis themselves, by a million Israelis protesting in the streets of Tel Aviv. That didn’t take the shame away from the State of Israel but at least it showed the dignity of many Israelis who believed that their country should not be involved in such horrors.”

Viewers then see footage of a badly translated rowdy debate in the Knesset before Thompson closes the video with a one-line simplistic summary of the findings of the Israeli commission of inquiry.

Thompson: “An Israeli inquiry condemned Ariel Sharon. He was forced to resign as defence minister.”

Not surprisingly given the political agendas of two of its featured ‘experts’, this ‘educational’ video is clearly designed to steer viewers towards the bizarre view that it was Israel’s actions in 1982 that thwarted what its synopsis describes as “the search for a peace protocol” even though no negotiations were on the cards at the time. With only one brief reference to the actual perpetrators of the Sabra and Shatila killings and no background information provided (let alone any mentions of Lebanese “shame” or a “stained reputation”), it disproportionately focuses on Israel while whitewashing the Palestinian terrorism which brought about the First Lebanon War.