September 7th: ‘Why Palestinians are protesting against their own government’, Yolande Knell and Anastassia Zlatopolskai 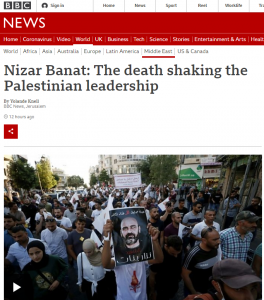 The latter article by Yolande Knell includes statements from Banat’s cousin and widow, from Fatah’s Sabri Saidam and from an interviewee described as a ‘prominent activist’ with implied linkage to “human rights groups”. [emphasis added]

“In the past few months there has been an increase in arrests of PA detractors, leading to condemnation from human rights groups about a clampdown on freedom of expression.

In August, a number of prominent activists were detained on their way to a demonstration, but were released within days after foreign diplomats expressed their concern.

When I meet one of them, Ubay al-Aboudi, director of the Bisan Center for Research and Development, he is relieved to be home with his wife and three sons but does not regret his actions.”

Al-Aboudi is also described as a “critic” in the photo caption that follows that framing: 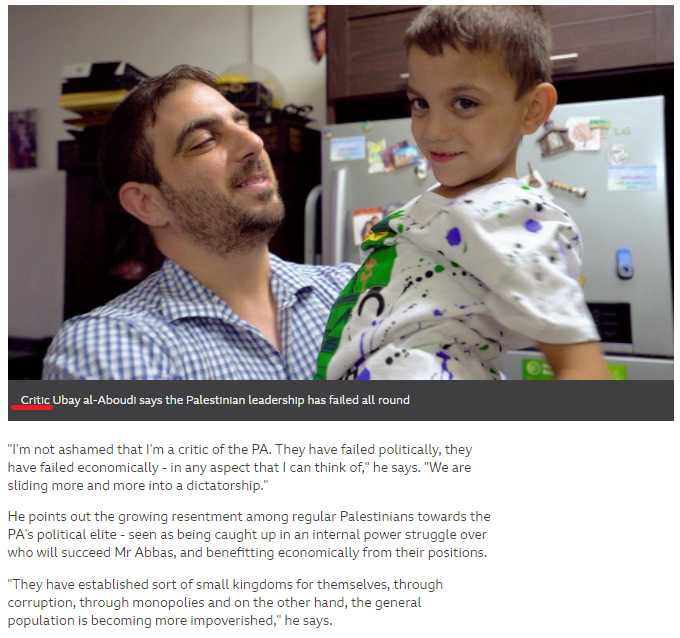 Knell goes on to once again portray her interviewee as an ‘activist’:

“Last week, European monitors turned out to watch as Mr al-Aboudi and others appeared in court charged with organising an illegal demonstration in July. Their case was adjourned until October. The activists are separately accused of badmouthing the PA.”

Nevertheless, Knell failed to provide readers with “appropriate information” about the person described only as an activist and a “critic”, or the organisations he represents.

As noted here in June when BBC World Service radio interviewed Ubay al Aboudi, he has been arrested at least three times due to his membership and activity in the PFLP terrorist organisation – most recently in November 2019. In his Linkedin profile al-Aboudi describes himself as also working for an NGO called UAWC which has links to the same terrorist group.

In December 2019 employees of both UAWC and the Bisan Center (both of which have received EU and other foreign funding) were arrested as part of a PFLP operated terror network connected to the murder of Rina Shnerb in August of that year.

Al-Aboudi’s own links to the PFLP as well as those of organisations he works for are clearly “relevant to the context” of his criticism of the Fatah-dominated Palestinian Authority, not least because such condemnation on the part of the PFLP predates the Nizar Banat story.

There is of course plenty of reason for foreign journalists to report on the Palestinian Authority’s corruption, crackdowns on critics and abuses of freedom of expression, not least because of the financial support it receives from Western nations. However, audience understanding of those topics is not enhanced by the BBC’s repeated superficial portrayal of anyone critical of the PA as ‘human rights activists’ without any clarification of their own often no less problematic actions, ideologies and “particular viewpoints” and – in this case – a history of links to a terrorist organisation.