Israeli law requires all citizens of relevant age to serve in the defence forces unless they have been granted exemption. Anyone failing to fulfil that obligation is hence breaking the law and liable for punishment.

On October 31st the BBC News website published an uncredited filmed report – “Israeli woman jailed three times for refusing to join the army” – promoting a person who has broken the law by refusing to meet her legal obligation to serve her country.

The woman concerned is portrayed as a “conscientious objector” and the film’s synopsis (which uses a case involving a person seeking asylum in the UK as a hook) also promotes that definition.

“Last week, a young Jewish ultra-orthodox Israeli man asked for leave to remain in the UK because he feared being imprisoned as a deserter from the military if he returned to his home country.

The unusual case has shone a light on the issue of conscientious objectors in Israel.

Most Jewish Israelis do compulsory military service for at least two years. However, every year a small number take an ideological stance to oppose their conscription and end up in military prison. Shahar Perets is one of them.” 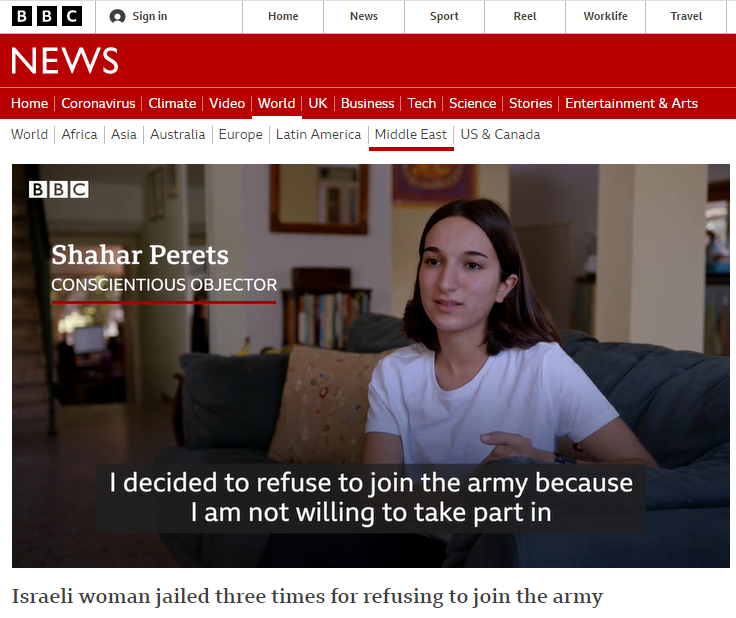 In the film itself viewers are told that:

“Shahar Perets has just spent 18 days in an Israeli military jail for refusing to serve on ideological grounds.”

Perets: “I decided to refuse to join the army because I am not willing to take part in the oppression of millions of people who live in the West Bank and Gaza.” […]

In 2002 Israel’s High Court of Justice ruled that while refusal to serve on the grounds of unqualified pacifism is conscientious objection, selective refusal based on political ideology is not grounds for exemption from service.

“The Supreme Court held that exemptions from military service may be granted according to the discretion of the Minister of Defense, pursuant to section 26 of the Defense Service Law (Consolidated Version)-1986. The Court held that the question of granting exemptions to military service based on selective conscientious objections involved a delicate balance between the freedom of conscience and the public interest. Here, the public interest was that it was neither proper nor just to exempt part of the public from a general duty imposed on all others. This was especially true when fulfilling the duty subjected a person to the ultimate trial—sacrificing his life.  This is certainly true when granting exemptions may harm national security and lead to administrative unfairness and discrimination in specific cases. As such, and under the circumstances, which included the current situation in Israel, the Court held that it saw no reason to intervene in the decision of the Minister of Defense not to grant exemptions for selective conscientious objectors.”

While the BBC’s film supposedly ticks the ‘impartiality box’ by including a much shorter interview with a young man who is going to meet his legal obligation to serve in the IDF, it is obvious that the actual aim of this report was the context-free promotion of an act of publicity-generating political activism that is misrepresented as ‘conscientious objection’ despite the fact that last month in a different interview Perets stated:

“I decided not to go before the conscientious objectors committee, a medical committee, or the IDF mental health officer,” says Perets, “because it is important for me to stand by my principles and not to create the impression that I am the problem and I should be exempted [from service]. I chose to go to jail and take part in a campaign because I hope it will reach the most people.” [emphasis added]

The editorial decision to feature a person who has deliberately broken the law in her own country in material promoted worldwide would appear to be at odds with the BBC editorial guidelines stating “[w]e must ensure that we do not glamorise, condone or encourage criminal behaviour”. Of course had Ms Perets chosen not to comply with any other Israeli law, she would have been of no interest to BBC journalists who bother less and less to hide the political motivations behind their reporting.