At around 22:40 on the night of August 25th, shots were fired from Lebanese territory at Israeli soldiers located near Kibbutz Menara in northern Israel. Residents of that community and four others in the area were ordered to stay indoors and roads in the area were closed.

“According to a source who spoke to The Jerusalem Post, the troops were in the field when they heard gunfire directed toward them. The military then fired dozens of smoke shells and light flares in order to stop the gunfire and in an attempt to identify those who fired on the troops. […]

“In response to the gunfire, IDF attack helicopters and aircraft struck terrorist targets belonging to the Hezbollah terrorist group,” the IDF said, adding that Hezbollah observation posts along the border were among the targets hit.

Lebanon’s MTV news agency quoted Lebanon’s Supreme Defence Council as denouncing what they called “an Israeli assault” and said a complaint would be filed to the United Nations. The Lebanese army said on its Twitter account that Israeli helicopters had fired missiles at centers belonging to Green Without Borders, an environmental NGO that Israel says belongs to Hezbollah.”

‘Green Without Borders’ has been described by the Washington Institute for Near East policy as “a Hezbollah front, providing the militant group cover for operational activities prohibited under UN Security Council Resolutions 1559 and 1701—from conducting preoperational surveillance to firing rockets at Israel” and has documented the NGO’s impediment of UNIFIL activity.

The IDF later released an illustration showing that the shooter/s were located approximately 250 meters from the border, between two UNIFIL posts. 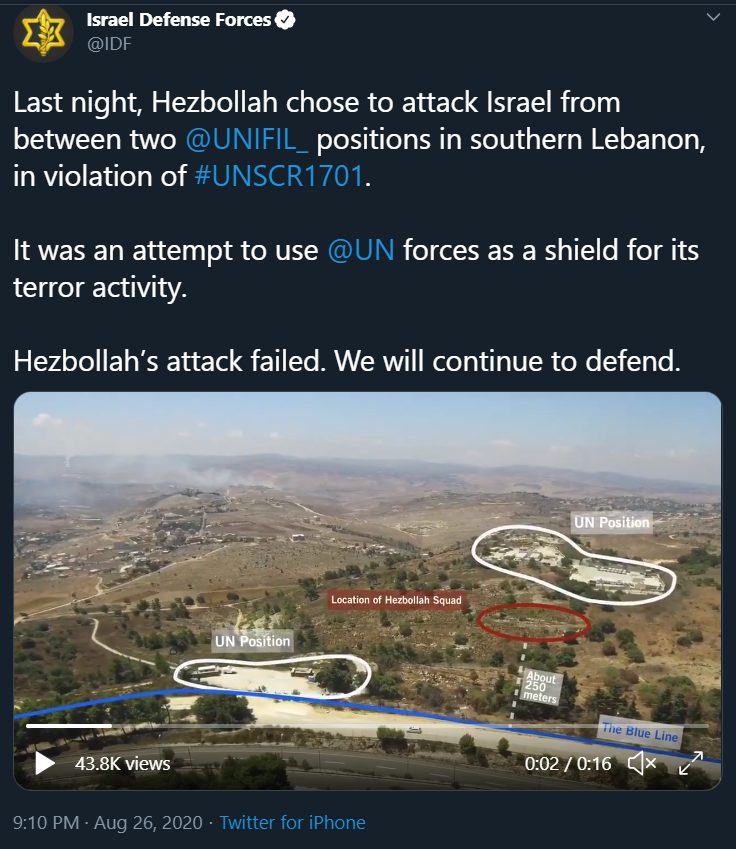 Another illustration was included in a letter of complaint sent by Israel’s ambassador to the UN. The Times of Israel reported that:

“For its part, UNIFIL announced on Wednesday it was launching an investigation into the incident, just as the UN is set to vote on extending its peacekeeping mandate in southern Lebanon.”

When Hizballah operatives infiltrated Israeli territory on July 27th we noted that the BBC had not reported an incident in Syria a week earlier (which was attributed to Israel by foreign sources) or the subsequent announcement by Hizballah of the death of one of its militia members in that incident and threat of a revenge attack. A BBC News website report on another incident which took place in the south Golan Heights on August 2nd told audiences that:

“Tensions have been rising between rivals Israel and Syria, particularly along Israel’s northern frontier, since an apparent Israeli air strike killed a Hezbollah fighter in Syria two weeks ago.

Israel had anticipated that the Iranian-backed Lebanese group would retaliate.”

Nevertheless (and despite the persistence of Hizballah threats),  one week later English-speaking BBC audiences have not seen any coverage of the August 25th incident.

Notably though, the corporation did consider that incident sufficiently newsworthy for its Arabic-speaking audiences: the BBC Arabic website published a report headlined “Israel announces targeting Hezbollah sites in Lebanon”.

ANOTHER UN SC RESOLUTION VIOLATION GOES UNREPORTED BY THE BBC

A FRENCH NEWSPAPER REPORTS ON A TOPIC THE BBC AVOIDS