Previously we discussed a filmed report posted on the BBC News website’s ‘Middle East’ page on October 31st which sympathetically promoted a person who has chosen to break Israeli law:

On the same day an audio version of that report – this time credited to the BBC Jerusalem bureau’s Yolande Knell – was aired on the afternoon and evening editions of the BBC World Service radio programme ‘Newshour’ (from 45:04 here and from 45:04 here).

Knell: “It’s possible to get exemptions from the military on medical, family or religious grounds. But a small number of young Israelis try to make a political point and this organisation – Mesarvot, or ‘refusers’ – supports them and gives advice on procedures. Noa Levy is their lawyer.”

Listeners were not informed that Levy is a member of the non-Zionist communist party Hadash and that ‘Mesarvot’ was defined from its beginning as a political enterprise. According to that organisation’s Facebook page, the BBC approached the draft evader featured in these reports weeks before they were published and spent a month filming her. 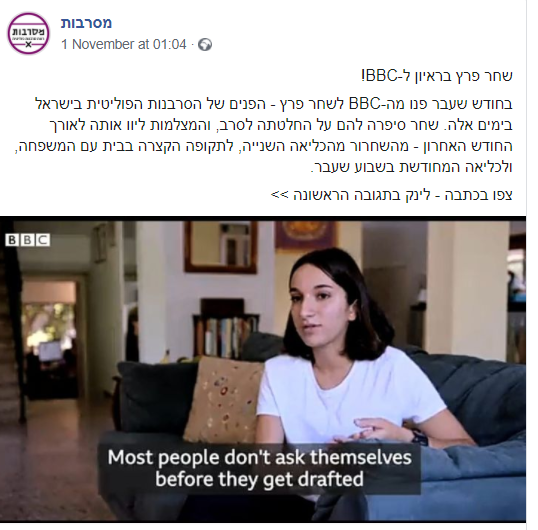 Listeners were also not informed that incitement to dodge military service is a punishable offence in Israel.

The same audio report was aired earlier the same day in the first edition of the BBC World Service radio programme ‘Weekend’ (from 18:39 here). It appeared again in a later edition of the same programme (from 30:56 here), together with comment from the programme’s two guests.

Presenter Paul Henley introduced that item and, as in the filmed report, people who refuse to do obligatory military service on political grounds were misrepresented as conscientious objectors.

Henley: “…last week saw an unusual case in which a young ultra-orthodox Jewish Israeli man asked to leave…asked for leave to remain, rather, in the United Kingdom because he feared being imprisoned as a deserter from the military if he returned to his home country. That case shone a light on the issue of conscientious objectors in Israel. Most Jewish Israelis have to do compulsory military service for at least two years. However every year a small number take an ideological stand to oppose conscription and they can end up in military prisons. Our Middle East correspondent Yolande Knell had this report.”

After Knell’s report came to an end at 34:50, Henley asked for comment from his guests. Rachel Shabi had previously been presented to listeners as a “British journalist, author and broadcaster”, with no mention of her record of anti-Israel writing, including on this topic. The second guest, Paul Basu of SOAS, had been introduced as an “anthropologist and academic”.

Henley: “Shahar Perets ending that report from Yolande Knell in Israel. Eh, what do you make of that, Rachel?”

Shabi: “I think…I mean it’s incredibly moving to hear these stories. Obviously, as the report mentioned, it’s very, very rare for young Israelis to be conscientious objectors. It’s such an incredibly militarised society, with of course compulsory military service, where the army is so intertwined with feelings of national identity that it’s not just about the huge amount of courage that it takes but it’s also, you know, the sort of social, political and economic capital that would be required to withstand the social stigma and often the economic consequences of refusing to serve.”

Henley went on to demonstrate just how little he and his guests actually know about the topic.

Henley: “There aren’t just front-line roles in the Israeli army. I mean you can, you can specify what sort of thing you work in. I think you can do kind of…you can do a form of – or is it just for women in Israel? I don’t know – you can do a form of service that isn’t military as well in equivalent time. Tell me.”

National Service (Sherut Leumi) is not limited to women or to Jews.

Shabi: “That’s right. So…ehm…women are allowed to do national service that would involve volunteering…ahm…and that’s a very sort of open slate of what that could be and you are seeing more and more people do that. But again it is something that is….[sighs]…because military service is seen as such a necessary part of belonging to Israeli society which – by the way – speaks volumes of the exclusion the Palestinian citizens of Israel would feel partly as a consequence of that. Ahm…but it is so stigmatised still that…ahm…it is just very, very difficult for people to do.”

Listeners were not told that Arab Israelis can – and do – volunteer for military service and are hence only subject to “exclusion” if they chose it.

Henley then appeared to promote the bizarre notion that obligatory military service in a country constantly under threat from terrorist organisations and neighbouring hostile countries is an “anachronism”.

Henley: “Paul Basu – it seems like quite an anachronism from Israel, doesn’t it?”

The anthropologist whose field of expertise is “genealogical heritage tourism and the historical imagination in the Scottish Highland diaspora” proceeded with inarticulate preaching on “the conscience of Israel” and the ‘wrongness’ of Israelis defending their country.

Basu: “Yes, I mean it’s quite hard to believe I think, you know, for many other places in the world that this can really go…go on and, you know, one can only be, you know, full of admiration of these few individuals who actually do stand up…ehm…against what’s, you know, much of the world seems…sees as absolutely, you know, shockingly wrong, you know. Ahm…but that kind of stigma, I mean, that people then…that carries through people’s lives once they’ve done this. So full of admiration and shock that, you know, I mean where is the conscience of Israel in all of this? These people are really standing up and expressing something so powerful.”

Apparently Basu is unaware of – or unconcerned by – the fact that various European countries with threat levels far lower than Israel (including Sweden and Finland) have military conscription, with penalties for those failing to meet that obligation.

To summarise, on October 31st the BBC World Service found fit to widely promote throughout the entire day a radio report featuring a person inaccurately portrayed as a ‘conscientious objector’ despite the fact that she chose to deliberately break the law in her country as part of a political campaign. The BBC’s amplification of a political narrative that portrays service in the IDF as taking part in “the oppression of millions of people who live in the West Bank and Gaza” was not balanced by the provision of any objective factual information.

Moreover, in the edition of ‘Weekend’ highlighted above, listeners around the world heard additional one-sided, inaccurate, uninformed and judgemental comment from a presenter and guests unperturbed by the fact that they were clearly out of their depth on this issue but nevertheless intent on amplifying their own politically motivated talking points.