On November 19th a report headlined “Hamas to be declared a terrorist group by UK” was published on the BBC News website’s ‘UK’ and ‘Middle East’ pages.

In its opening lines the report perpetuates the myth of separate ‘wings’ to the Hamas terrorist organisation, just as the BBC has done in the past with Hizballah. 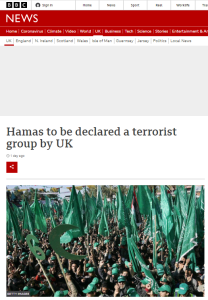 “Home Secretary Priti Patel has announced she is seeking to declare the whole of Palestinian militant group Hamas a terrorist organisation.

The military wing of the group which controls Gaza is already proscribed a terrorist organisation by the UK.

However, the change will also cover the Islamist movement’s political wing.”

Readers find a curious description of counter-terrorism measures employed in order to prevent Hamas from importing dual-use goods and weapons to the Gaza Strip, together with uncritical promotion of claims from unidentified “human rights groups”.

“Hamas has carried out hundreds of deadly attacks against Israel and fired thousands of rockets at it during years of hostilities between the two sides. Israel, along with Egypt, has hemmed in the Gaza Strip since Hamas took over in 2006 and waged a series of wars against it. Human rights groups have accused both sides of committing war crimes.” [emphasis added]

The euphemistic claim that Hamas “took over” the Gaza Strip (an event which actually occurred in 2007) clearly does not contribute to audience understanding of the fact that the terrorist organisation staged a violent coup against its political rivals. A later description of the same event is little better:

“But after 2005, when Israel withdrew its troops and settlers from Gaza, Hamas has also engaged in the Palestinian political process. It won the legislative elections in 2006, before reinforcing its power in Gaza the following year by ousting the rival Fatah movement of President Mahmoud Abbas.” [emphasis added]

“Hamas originally had a dual purpose of carrying out an armed struggle against Israel – led by its military wing, the Izzedine al-Qassam Brigades – and delivering social welfare programmes.”

Readers are not informed what the aim of that “armed struggle” is, even though the statement put out by the Home Office (to which the BBC’s report does not link) clearly states that:

“Hamas is an organisation which calls for the establishment of a Islamic Palestinian state under Sharia law and has repeatedly called for the destruction of Israel. It has long been involved in significant terrorist violence.”

“In response, Hamas accused the UK of supporting “the aggressors at the expense of the victims”.”

The parts of the Hamas response that the BBC chose not to quote were reported by the Times of Israel:

“…Hamas condemned the move as one of a long line of British “sins” against the Palestinian people. The terror group singled out the 1917 Balfour Declaration, which affirmed British support for establishing a Jewish state.

“Rather than apologizing and correcting its historical sins towards the Palestinian people, whether the shameful Balfour Declaration, or the British Mandate, that turned Palestinian land over to the Zionist movement — [Britain] supports the aggressors at the expense of the victims,” the terror group said in a statement. […]

“Resisting occupation, by any available means, including armed resistance, is a right guaranteed to peoples under occupation in international law. It is the occupation that is terrorism,” Hamas said.

“Our Palestinian people, and behind them the Arab and Islamic nations and all the free people of the world, are on their way to freedom and the return [to Israel], no matter what sacrifices that might entail,” Hamas concluded.”

An insert of analysis from the BBC’s diplomatic correspondent James Landale tells readers of mysterious “deep contacts” but fails to explain why, if that is the case, such a step has not previously been taken in the eleven and a half consecutive years that the Conservative Party has been in power.

“Israel has been pushing for this for some time and the fact it is now happening reflects the deep contacts that Israel has within the Conservative Party.” [emphasis added]

“The change also provides Conservative MPs with a new dividing line with those on the Labour left that have in the past shown sympathy for Hamas.”

However he fails to provide readers with any examples of how such “sympathy” has manifested itself or to mention the issue of Hamas members and supporters in the UK.

If Parliament does approve the proscription order, it will come into force later this month. According to BBC editorial guidelines:

In theory at least, the BBC’s funding public should therefore see fewer interviews and quotes from the likes of Mahmoud Zahar, Osama Hamdan, Ghazi Hamad and Khaled Masha’al on the corporation’s various platforms in the future.