Despite the fact that the Palestinian Islamic Jihad has been a proscribed terrorist organisation in the UK for over two decades, in that headline and in the report itself the operatives and the organisation to which they belonged are portrayed using the terms “militants” and “militant group”, with the sole use of the word terrorism in the entire report coming in a reference to a counter-terrorism unit. [emphasis added] 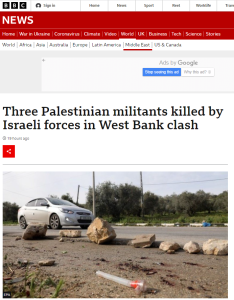 “Three Palestinian militants have been killed in a gun battle with Israeli security forces near Jenin in the occupied West Bank, Israeli police say.

A statement said the Palestinians were on their way to carry out an attack in a car on Friday night and that they fired on a counter-terrorism unit that was trying to arrest them.

Four Israeli troops were wounded in the ensuing clash, one of them seriously.

The BBC’s report recycles the often-seen notion of different ‘wings’ to terrorist organisations while uncritically amplifying the PIJ’s incitement:

“”We mourn our heroic martyrs and we assert that our fighters will continue to combat the enemy,” it [sic – the PIJ] armed wing said.”

“The violence has come in the run-up to a sensitive time when religious holidays will overlap for Muslims, Jews and Christians. Saturday is the first day of the Islamic holy month of Ramadan.”

Once again no mention is made of terror groups’ use of Ramadan to incite violence.

The BBC’s report does not inform readers that the same terror cell had carried out a previous recent shooting attack near Tulkarem or of the items found in their car.

“The suspects had been under Shin Bet surveillance for several hours ahead of the shootout, and Israeli troops found firearms and grenades in their vehicle.

Police released images of the weapons said to have been in the suspects’ vehicle, including an M16 assault rifle, at least two 30-round magazines and a hand grenade.

A will was found in the terror suspects’ vehicle, in which one wrote that attacks against Israel must be continued.

The handwritten note was signed in the name of the Islamic Jihad.”

The BBC’s report was not amended to include information about the later arrest of another suspected member of the terror cell in Shuweikha, near Tulkarem.

The report does mention an incident that took place in Hebron on April 1st:

“On Friday, a Palestinian man was shot dead during clashes with Israeli forces in the West Bank city of Hebron, the Palestinian health ministry said. The Israeli military said its soldiers opened fire when a suspect threw a Molotov cocktail at them during a riot.”

However BBC audiences are not informed that the man was apparently a former security prisoner who was mourned by Hamas.

Once again we see that BBC reporting on terrorism related incidents is compromised by the corporation’s editorial policies concerning ‘language when reporting terrorism’.

BBC NEWS WEBSITE REPORTING ON AN INCIDENT IN JENIN