However that report was not about a story that took place in the location stated in the tag. Rather, it was about a story from north Wales, which is why it also appears on the website’s ‘Wales’ page.

“Four people have been arrested following a “free Palestine” protest on a factory roof in Wrexham.

North Wales Police said they were made aware of the demonstration at Solvay at 0715 GMT on Monday.

Police negotiators were brought in an attempt to negotiate with the protesters on the Wrexham industrial estate during the day.

The incident was brought to a safe conclusion by 2050 GMT. Police are investigating damage to the building.”

The only clue to the identity of those “protesters” comes in the caption to the report’s illustrative photo: 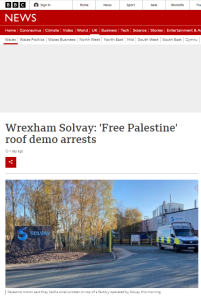 Previously we have documented how the BBC News website has reported on incidents of trespassing and vandalism perpetrated by the radical group calling itself ‘Palestine Action’.

In this latest report too, the BBC failed to provide its audiences with a proper explanation of the group, its tactics and its political agenda which includes the following:

Neither did this report make any effort to inform readers why the people who were once again portrayed merely as ‘protesters’ had targeted and vandalised a factory that produces resin products or of the connection to a Welsh Marxist group.

“Palestine Action activists have today scaled the roof of Solvay’s Wrexham site, as part of their ongoing campaign against the suppliers of Israeli drone manufacturer Elbit Systems Ltd. The building has been sprayed with blood-red paint, symbolising the bloodshed from which Elbit and Solvay profit. Further action has involved the dismantling of factory premises, as activists look to disrupt and undermine future operations at the site. Today’s action – the first time that Palestine Action have occupied a factory in Wales – is supported by the Welsh Underground Network, a group employing community and direct action in pursuit of a socialist republic in Wales.”

Back in February we observed that:

“…just as the BBC has in the past refrained from providing relevant background concerning the aims of the BDS campaign and the agenda of the Palestine Solidarity Campaign (PSC), it once again hinders audience understanding of a story by failing to provide the full range of information about the real agenda of a group whose political stunts it chooses to report.”

That particularly unhelpful editorial policy of airbrushing extremism and failing to provide relevant context obviously still applies, even while BBC clearly sees no issue with touting the slogan ‘Free Palestine’.