Previously we discussed the second episode of a series by Katy Long called ‘100 Years of Exile’ which, after having been aired on BBC Radio 4 last month, was also broadcast on the BBC World Service radio programme ‘The Compass’. Both editions will remain accessible online “for over a year” after their initial broadcast according to their webpages.

As we noted at the time, a reference to Israel in that programme’s synopsis is misleading:

The third and final episode of the series was aired on BBC World Service radio on November 24th. 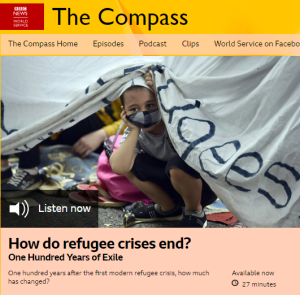 “Katy Long hears stories from refugees who have returned to their homeland, to those who have been resettled, and to those who are still in limbo, she examines how does a refugee crisis end.”

Listeners to that episode hear contributions from Henry Foner, who was evacuated to Britain by the Kindertransport, as an example of resettlement of refugees.

After a section about “pushbacks” against Syrian refugees arriving in Greece by sea from Turkey, listeners also hear the following (from 16:21 here): [emphasis in italics in the original, emphasis in bold added]

“We talk now about pushbacks in the Mediterranean: they have a long, long history.”

With no information given concerning the relevant timeframe, audiences are told that:

Stonebridge: “What you had was an aggressive pushback policy in the Mediterranean on behalf of the British to keep Jewish refugees out of Palestine and you literally had suffering people being turned away at Haifa docks. Famously a boat was pushed back and the people on the boat blew themselves up in Haifa harbour, rather than go back to Germany.”

Although Stonebridge does not give the name of the ship, she would appear to be referring to the S.S. Patria and an incident that took place in November 1940. Contrary to her claims, the passengers did not blow themselves up and the British mandate authorities intended to transport those Jewish refugees to Mauritius for internment.

Clearly that two-sentence portrayal does not give BBC audiences even minimal information about the limits placed on Jewish immigration to mandate Palestine by its British administrators – including at a time when refuge was most needed – or why those restrictions were imposed. No mention is made of the fact that Israel also absorbed millions of refugees from Arab and Muslim countries before Long goes on to say:

Long: “These pushbacks are embedded deep in the collective Israeli memory; part of the reason why every Jewish person has a right to live in Israel. But Israel has a noticeably less hospitable attitude to other would-be refugees and in 2017 the government there came up with a new way of dealing with them.”

Listeners are not told what the term “would-be refugees” means before they hear from Israeli MK Michal Rozin.

Rozin: “The government of Israel promoted another plan with Rwanda government that said we will deport our refugees to your country and we will pay you for each one of the refugees something like $7,000 I think.”

At no point are listeners told that the people described as refugees were in most cases migrants from African countries, mostly Eritrea and Sudan. No information is provided concerning the illegal entry of those migrants into Israel and listeners are not told that the majority did not in fact submit requests for asylum. The fact that Israel’s High Court ruled that deportations could only be carried out with the consent of the deportee is not mentioned.

Long: “Michal Rozin is a member of the Israeli parliament who has a long record of campaigning for the rights of those seeking asylum in Israel. In 2018 she travelled to Rwanda to see for herself what kind of welcome Israel’s asylum seekers received there.”

After Rozin describes her visit to Rwanda, Long goes on:

Long: “Shortly after Michal returned and reported her findings, the arrangement came to an end.”

Readers may recall that six years ago the BBC clarified its policy concerning the use of the word migrant:

“The BBC uses the term migrant to refer to all people on the move who have yet to complete the legal process of claiming asylum. This group includes people fleeing war-torn countries such as Syria, who are likely to be granted refugee status, as well as people who are seeking jobs and better lives, who governments are likely to rule are economic migrants.”

Not for the first time, however, in this programme we see that issues of consistency in terminology arise when a BBC story relates to Israel. By portraying African migrants who entered Israel illegally as refugees, Katy Long is able to promote to BBC audiences worldwide a narrative – with all its implications – whereby “Israel has a noticeably less hospitable attitude” to non-Jewish refugees. That claim, like her portrayal of the issue of Palestinian refugees in the previous episode, is presented despite no effort having been made to adequately inform BBC audiences of the context of Israel’s record of absorbing refugees from dozens of countries around the world,

DIFFERENCES IN BBC COVERAGE OF MIGRANTS IN EUROPE AND IN ISRAEL