Last month we reviewed an episode of a BBC Radio 4 series called ‘100 Years of Exile’ featuring the academic Katy Long who has previously presented Israel-related content for that station.

BBC World Service radio has a programme called ‘The Compass’ (also available as a podcast) which it describes as follows: 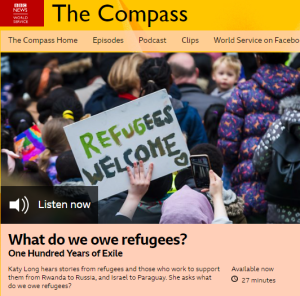 “The Compass presents mini-series about the environment and politics, culture and society.”

On November 10th that programme aired the first episode of a recycled version of Long’s three-part series previously broadcast on Radio 4 and on November 17th, the second episode – titled “What do we owe refugees?” – was aired.

“Katy Long hears stories from refugees and those who work to support them from Rwanda to Russia, and Israel to Paraguay. She asks what do we owe refugees?”

Instead, BBC radio audiences once again hear (from 20:05 here) the same account that fails to explain why Palestinians have been kept in camps by Lebanon for generations and avoids the issue of the Lebanese government’s long-running intentional discrimination against Palestinian refugees and the politics behind that policy.

Yet again listeners are not given any objective explanation as to why Palestinian refugees have different criteria (including hereditary status) to refugees from the rest of the world and a separate UN agency that refrains from working towards their integration (even in territories run by Palestinians) and resettlement in host countries.

Our critique of the programme (which will remain available online for “over a year”) can be read here: