Back in August 2019 we documented the absence of any BBC coverage of a legal story concerning an Israeli political party:

BBC INTEREST IN ISRAELI POLITICIANS’ LEGAL CASES HAS ITS LIMITS

When the intention to indict former MK Haneen Zoabi and additional members of the anti-Zionist party Balad was announced in August 2019, the case was described by ‘Ha’aretz’ as follows:

“Former lawmaker Haneen Zoabi and the Arab party Balad will be indicted pending a hearing for forgery and fraud relating to their reports on campaign funding filed to the state comptroller, the attorney general and state prosecutor announced Thursday.

Balad is suspected of having received from abroad some three million shekels ($862,650) and using the funds while pretending that the money had come in as donations. The party rejected the accusations, claiming they were part of “political persecution.” […]

Zoabi and the others are suspected of aggravated fraud, attempted fraud, money laundering, aggravated forgery, using a forged document and forging corporate records.  […]

Party officials deposited around 2.4 million shekels ($690,000) in the party bank account before the 2013 general election.  In a financial report provided to the state comptroller in February 2016, the funds were described as donations. The report was accompanied by 1,300 receipts, found by police investigation to be forged, and a list of donors, also found to be forged, according to the prosecution.”

The final decision to indict Zoabi and twelve others was announced in April 2021 and the indictment was filed in August 2021. In October 2021 they were convicted.

“Former Knesset member Hanin Zoabi and 12 others tied to the Balad party, including senior officials, were convicted Monday at the Nazareth Magistrate’s Court on forgery and fraud offenses in the party’s financial irregularities scandal.

As part of the plea deal, the officials confessed to the crimes and are expected to receive sentences ranging from community service to suspended prison sentences and fines ranging from NIS 25,000 to 75,000 ($7,700-$23,200). […]

According to the indictment, Zoabi and the others were involved in the forgery of documents that were submitted to the state comptroller between 2013 and 2016. They then systematically deceived the ombudsman by misrepresenting the source of millions of shekels the party had received.”

This week Zoabi was given a suspended sentence and a 75,000 shekel fine by the court. 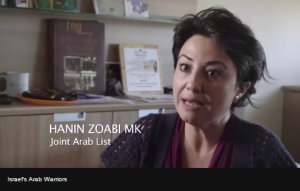 Despite the BBC having featured Haneen Zoabi in its content on several occasions when she was a member of the Knesset and notwithstanding the continuation of the long-standing BBC News website practice of frequently reporting criminal/legal stories in Israel (especially if they involve Israeli politicians or public figures), in the nearly two-and-a-half years since it began, BBC audiences have not heard a single word about this story.

By way of comparison, in the same period of time visitors to the BBC News website alone have seen twelve separate written reports concerning the indictment and ongoing trial of Israel’s former prime minister Binyamin Netanyahu. Reports on that topic even have a dedicated tab and the latest one concerns a potential plea deal which – unlike the Balad story concerning mysterious donations from abroad – does interest the BBC.