The Guardian published a report yesterday about the gunman who took several Jews hostage in a Texas synagogue on Shabbat while demanding the release of Aafia Siddiqui.  Siddiqui is a Pakistani woman and suspected al-Qaeda operative – dubbed ‘Lady al-Qaeda’ by the NYC media – who was convicted of trying to kill US military officers in Afghanistan.

The British gunman, who reportedly engaged in antisemitic rhetoric during the standoff, was later named as Malik Faisal Akram, a 44 year old man from Blackburn in Lancashire.  He was killed during a raid by FBI agents, and all the hostages were unharmed.

In the livestream the hostage-taker was heard demanding the release of Aafia Siddiqui, a Pakistani neuroscientist suspected of having ties to al-Qaida, who was convicted of trying to kill US military officers while in custody in Afghanistan, one of the law enforcement officials said. Siddiqui is in federal prison in Texas.

In fact, when she was captured by US authorities, Siddiqui was reportedly carrying notes detailing a “mass casualty attack” on New York City sites, including the Empire State Building, the Statue of Liberty and the Brooklyn Bridge.

Siddiqui also has a well-documented history of antisemitism.

In 2009, while awaiting trial on charges that she tried to kill US servicemen, Siddiqui tried to fire her lawyers because they were Jewish, and later demanded that jurors be DNA tested to ‘prove’ they weren’t Jewish.

After the trial, Siddiqui herself wrote a letter to then-President Barack Obama, claiming that when you “study the history of the Jews” you see that “they have always back-stabbed everyone who has taken pity on them and made the ‘fatal’ error of giving them shelter.” She added: “It is this cruel, ungrateful back-stabbing of the Jews that has caused them to be mercilessly expelled from wherever they gain strength. This why ‘holocausts’ keep happening to them repeatedly! If they would only learn to be grateful and change their behavior!!”

The Guardian’s omission of this fact is telling in the context of the following sentence in the article:

“This latest antisemitic attack at a house of worship is an unacceptable act of evil,” the CAIR national deputy director, Edward Ahmed Mitchell, said in a statement. “We stand in solidarity with the Jewish community.”

Predictably, the Guardian fails to reveal that CAIR has taken up Siddiqui’s cause, repeatedly demanding that she be released, referring to her conviction as “one of the greatest examples of injustice in U.S. history.” 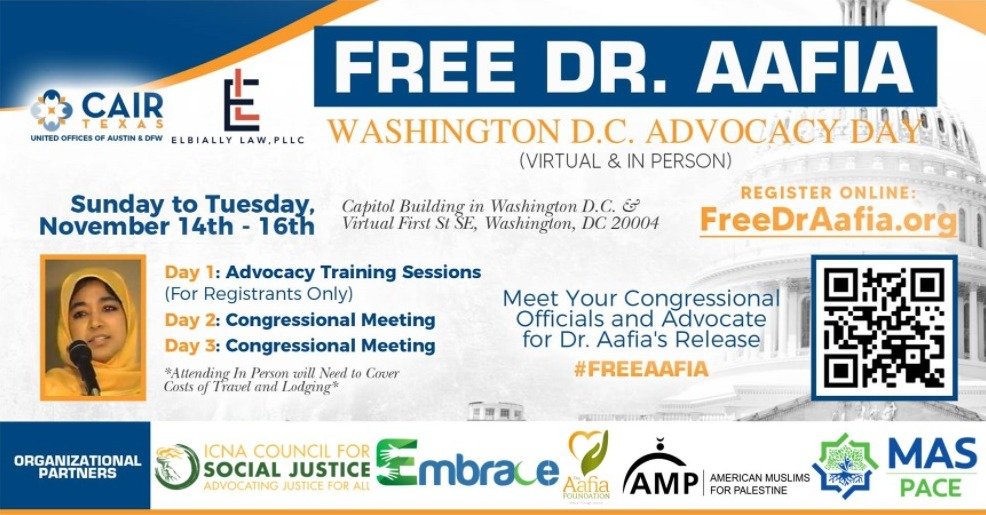 According to CNN, the gunman spoke to a New York-based rabbi on the phone during the hostage standoff and told him that he was doing this because Aafia was “framed”.  This is all extremely relevant in the context of CAIR’s statement cited by the Guardian.  The group was condemning a synagogue hostage-taking that was motivated by the same extremist political cause that they themselves have full-throatedly embraced.

But, that’s not the only crucial information omitted.

The Guardian described CAIR benignly as a US “Muslim advocacy group”, when, in fact, the group has a clear record of extremism and antisemitism. (Full Disclosure: CAIR has baselessly smeared CAMERA as anti-Muslim in a report which named 39 non-profits – including other mainstream Jewish organisations – as part of an alleged “Islamophobia network”.)

As our colleague Sean Durns has written, CAIR’s founder and executive director, Nihad Awad (who published a Guardian op-ed in 2015 about Islamophobia) is a Hamas supporter.  In the early 90s, he was the public relations director for the Islamic Association for Palestine (IAP), a Hamas-affiliated antisemitic group which published a monograph entitled “America’s Greatest Enemy: The Jew! and an Unholy Alliance!”.

However, the extremism in question goes beyond the group’s director.

CAIR was named as an unindicted co-conspirator in the largest terrorism financing case in US history.  Here’s part of what the FBI wrote about CAIR in response to an inquiry from a US Senator:

“CAIR was named as an unindicted co-conspirator of the Holy Land Foundation for Relief and Development in United States v. Holy Land Foundation et al…. During that trial, evidence was introduced that demonstrated a relationship among CAIR, individual CAIR founders (including its current President Emeritus and Executive Director) and the Palestine Committee. Evidence was also introduced that demonstrated a relationship between the Palestine Committee and Hamas, which was designated as a terrorist organization in 1995. In light of that evidence, the FBI suspended all contacts between CAIR and the FBI.”

The FBI’s decision to suspend formal contacts was not “intended to reflect a wholesale judgment of the organization and its entire membership. Nevertheless,” the Bureau ordered that until it “can resolve whether there continues to be a connection between CAIR or its executives and Hamas, the FBI does not view CAIR as an appropriate liaison partner.” As a result, the FBI restricted its field offices’ “non-investigative interactions with CAIR,” according to a Sept. 2013 U.S. Department of Justice Inspector General report issued under the Obama administration.

Ghassan Elashi, co-founder of CAIR’s Texas chapter. Elashi was one of five men sentenced to prison in the Holy Land Foundation case for raising more than $12 million for Hamas. While well-meaning individuals may be active in CAIR at local or state levels, the council has also had no fewer than five former lay leaders or staffers who have been arrested, convicted and/or deported for terrorism related charges.

Randall Royer, a CAIR employee tasked with outreach and communications, who pled guilty to weapons and explosives charges in 2004. In later grand jury testimony, Royer admitted that his terror cell’s primary goal was to fight with the Taliban against U.S. forces in Afghanistan.

CAIR’s former community relations director, Bassem Khafagi, who was sentenced in September 2003 in the U.S. to 10 months in prison and later deported to Egypt, after pleading guilty to two counts of bank fraud and one count of visa fraud. He had been charged with funneling money to promote terrorist activities.

Rabih Haddad, a fundraiser for CAIR’s Ann Arbor chapter, who was deported to Lebanon after an immigration judge, found that he presented “a substantial risk to the national security of the United States.” The U.S. Treasury Department said Haddad had been a member of Makhtab Al-Khidamat, the precursor organization to Al Qaeda.

But, there’s also the issue of the group’s history of antisemitism, with the latest incident occurring just last month.

During a talk about Islamophobia delivered in November, CAIR-San Francisco Bay Area Executive Director Zahra Billoo told the audience to “pay attention” to “Zionist synagogues” and other mainstream Jews or Jewish organisations that represent the mainstream American Jewish community, calling them “fascists” and “the enemy”.

CAIR Exec Dir Zahra Billoo, speaking at a conf for anti-Israel/BDS org AMP, calls 2 state solution 'laughable'; US Jewish orgs that support Israel 'the enemy;' Jews who support Israel "fascist;" & calls on Muslims to oppose any Jew who supports Israel who try to befriend them: pic.twitter.com/nkHKg9FYwZ

Can you imagine the Guardian referring to a racist Jewish organisation that had multiple former leaders convicted of terrorism related offences as merely a “Jewish advocacy group”?

Contrary to the statement by CAIR in response to the synagogue incident, they have never stood “in solidarity with the Jewish community”, and their words, uncritically reported by the Guardian, were nothing more than damage control – a PR effort aimed at diverting focus away from the fact that their advocacy on behalf of a vile antisemitic terrorist just blew up in their faces.