When the BBC recently reported on “Protests held across the globe” against the Russian invasion of Ukraine its filmed report included footage from Georgia, India, Taiwan, Turkey, the US, Argentina, the UK and Japan. 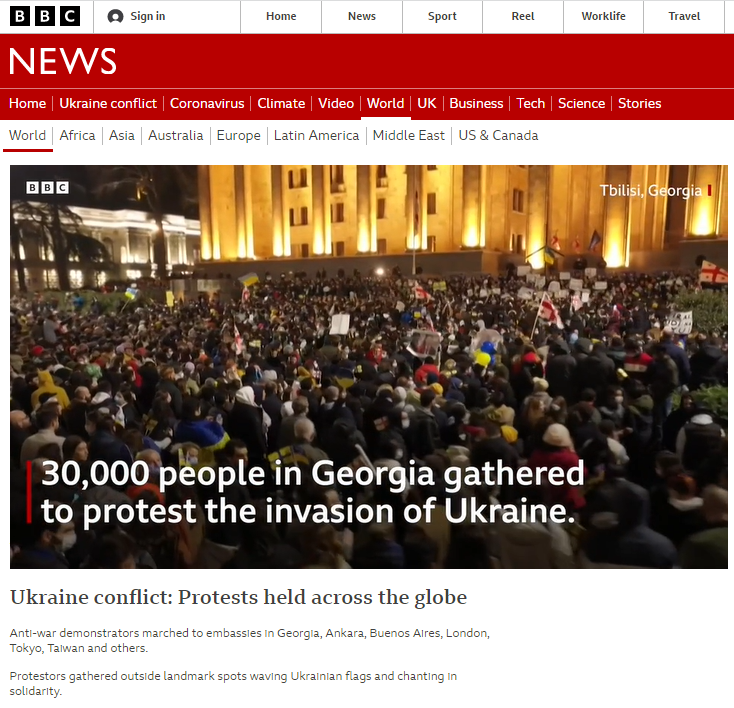 Similar demonstrations in Tel Aviv, Jerusalem and Haifa have not been reported on the BBC News website – the platform described by the BBC as “a permanent public record” – despite locally based staff being aware of them.

Several other stories relating to the crisis in Ukraine have so far also been ignored, including the death of an Israeli citizen who was trying to make his way to the border with Moldova, which the BBC Jerusalem bureau also knows about.

The arrival of an Israeli medical delegation at the Moldova-Ukraine border (the first foreign team on the ground in that area) has likewise received no coverage.

“The team is administering medical care, mainly related to exhaustion, cold and hunger, and tending to some injuries. Hypothermia is expected to become a major problem as the temperature drops and snow falls in the coming days. Several pregnant women have come in with complications.

The group of 12 includes EMTs, paramedics, doctors, a dentist, and members of Hatzalah’s Psychotrauma and Crisis Response Unit. Another 30 people are set to join the mission

The Hatzalah team has met many Israelis, who are safe but struggling to find transportation from Moldova to Israel. […] The Hatzalah team also treated a Gazan Palestinian and a Jordanian man, Attias said.”

BBC audiences have seen no reporting on help given by Israel to students from other Middle Eastern countries trying to leave Ukraine.

“Israel helped citizens of Arab states with which it does not have relations reach Ukraine’s borders to leave the country in recent days, the Foreign Ministry confirmed on Sunday.

About 100 Israelis – mostly Israeli Arabs – studying in Kharkiv in eastern Ukraine reached the border with Moldova on the west on Sunday after a 24-hour drive. The group was met there by Ambassador Joel Lion.

Some of the students asked to bring their friends, including citizens of countries with which Israel does not have relations, such as Lebanon and Syria, as well as Egyptians and Palestinians from east Jerusalem, who are legally residents of Israel.”

Israel’s transfer of humanitarian aid to Ukraine has also not been reported by locally based BBC staff.

“The final portion of Israel’s 100-ton humanitarian aid package to Ukraine was prepared for transport Tuesday morning at Ben Gurion Airport, with the El Al plane carrying the aid — preceded by two additional flights in the past hours — set to take off later in the day to Warsaw, for expected delivery in Ukraine this week. […]

While visitors to the BBC News website’s ‘Middle East’ page have seen no coverage of those stories, the Jerusalem bureau’s Tom Bateman did give his take on the latter topic on Twitter. 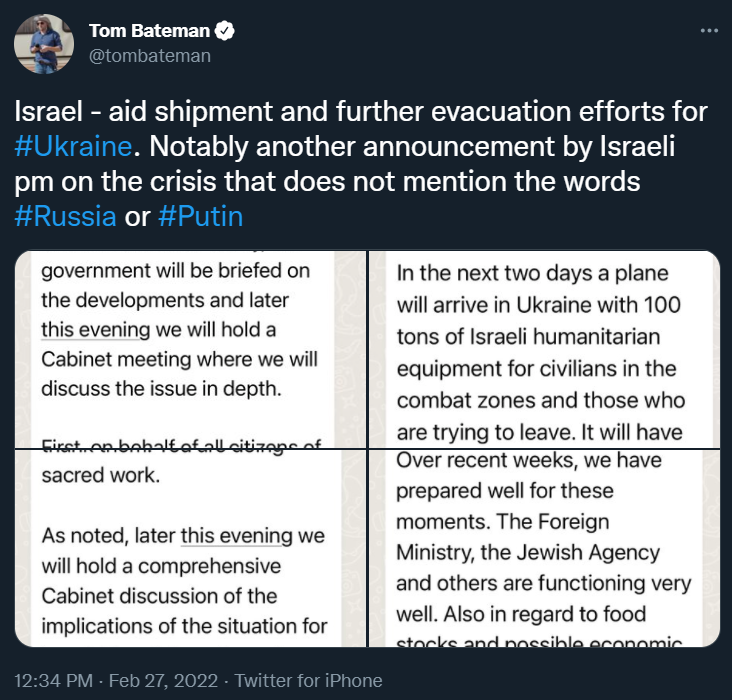 Surely BBC audiences would be better informed were the Jerusalem bureau to focus on reporting that and other actual stories rather than expending energies commenting on the wording of Israeli announcements on social media.