Throughout the four days of BBC coverage of Operation Breaking Dawn a marked difference was evident between content broadcast on the BBC’s domestic station Radio 4 and that aired on BBC World Service radio.

Knell also contributed to programmes aired on BBC World Service radio on the same days but in most of those broadcasts, listeners around the world also heard additional commentary. 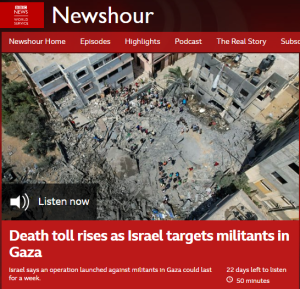 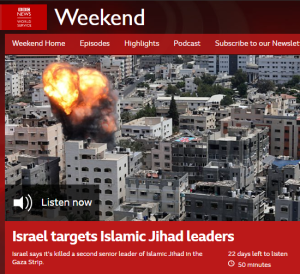 ‘The World This Weekend’, presenter James Naughtie, from 02:09 here 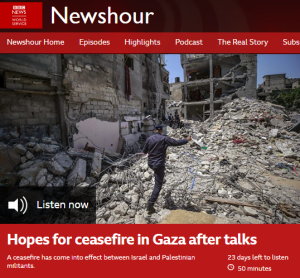 In all, over those four days of coverage listeners heard from two Israeli journalists, from an Israeli foreign ministry spokesperson on two occasions and from the Israeli ambassador to the UK (partly repeated in a later programme). A recording of Israel’s prime minister speaking appeared in one programme and a recording of remarks from Israel’s minister of defence was used on four occasions.

The fact that Hamas imposed restrictions on journalists in the Gaza Strip, which included a ban on reporting of shortfall missiles, clearly did not perturb the BBC World Service from soliciting interviews with representatives of that terrorist organisation and providing a worldwide platform for its talking points.

Both Hamas and the PIJ are designated by the UK Home Secretary and it would therefore appear that those interviews with members of Hamas were approved by David Jordan in advance, despite their minimal contribution to audience understanding of the story and notwithstanding Hamas’ blatant disregard for press freedom.

THE INEVITABLE ZOMLOTFEST RETURNS TO BBC TV AND RADIO