Hot on the heels of that interview came another one with a no less problematic figure from 23:13. 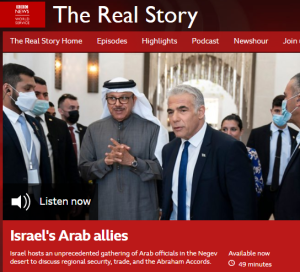 Marshall: “Well one of the reasons Israel’s failed in the past to build formal relationships with most Arab countries is because of the failure of the peace talks with the Palestinians. For many in the Muslim world, normalisation is dependent on Palestinian statehood. Let’s explore that a little bit. All the Arab states at the Negev meeting signed up to what’s known as the Saudi initiative back in 2002 which called for a normalisation of relations between the Arab world and Israel in return for a withdrawal by Israel from the occupied territories and the establishment of a Palestinian state with East Jerusalem as its capital. Hence, Palestinian anger that such a meeting in Negev [sic] was taking place. And to get a sense of the depth of that anger, let’s hear from Gaza where Hamas is in control. Fathi Hamad is a senior member of Hamas and a member of the organisation’s political bureau. What does he make of the new warmer relations being developed between Israel and its Arab neighbours?”

As we see, despite the UK government having declared Hamas a terrorist organisation in its entirety in November 2021, the BBC continues to use its members as contributors – a step supposedly requiring senior approval.

Despite his reference to the Saudi (Arab) initiative, Marshall refrained from telling listeners that Hamas rejected that initiative, as clarified by his interviewee in 2007. Unsurprisingly, all listeners heard from Fathi Hamad were the usual – unchallenged – Hamas talking points.

Hamad: “I feel that when they receive Israel and Israel in the same time they violate the international law and the national rights of the Palestinians and they don’t recognise the right of the Palestinian and they build settlements give kind of umbrella legitimacy to Israel to do what they want against the Palestinians.”

Marshall: “In the past week there’ve been a number of gun attacks by Arab gunmen on Israeli targets killing 11 people. The attack on Tuesday evening in the suburbs of Tel Aviv killed five and was welcomed by Hamas which expressed – and I quote – our blessing to the Tel Aviv operation. Now doesn’t support for violence like this make it easier for Arab leaders in the region to justify working with the Israelis? They were all united in condemnation of such acts when they met in Negev [sic].”

Hamad: “Do you know how many Palestinians killed in the last two weeks? Is it condemned by the people in the West? How many homes demolished by the Israeli forces in the West Bank?”

Hamad went on to make a barely coherent reference to the “Oslo Agreement”, with Marshall making no effort to remind listeners that Hamas also rejected those accords before closing the interview.

Marshall: “Well let’s hear now from Hanan Ashrawi: veteran Palestinian politician and activist. Over the past three decades she’s participated in or had a front-row seat at just about every major attempt to find a diplomatic solution to the conflict between Israel and the Palestinians and she told me that she’s not impressed by the gathering this week in Israel.”

The participants in the Negev summit were Egypt, Morocco, the UAE, Bahrain and Israel. Marshall failed to challenge Ashrawi’s inaccurate opening claim whereby Egypt and Morocco “were never at war with Israel”.

Ashrawi: “It has nothing to do with peace or reconciliation. These countries were never at war with Israel. On the contrary, many of them had secret deals. They just came out into the open. And it is a question of pure self-interest. The Arab peace initiative was based clearly on the essence of Israel returning all the occupied Arab lands before any type of recognition or any type of normalisation. And this now has been turned on its head. This has created serious rifts in the Arab world and at the same time has entrenched this rift between the people and their leadership.” [emphasis added]

Unsurprisingly, Ashrawi’s inaccurate description of Judea & Samaria, parts of Jerusalem and presumably the Gaza Strip as “Arab lands” was not challenged by Marshall.

Marshall: “Could there be though another way of looking at this? Speaking at the conclusion of the summit in Negev [sic] US Secretary of State Blinken as well as the foreign ministers of Egypt and Morocco said that a two-state solution is still their aim, implying that renewed ties between Israel and its Arab neighbours make this more likely, not less. Couldn’t they be right?”

Ashrawi: “No. [laughs] This is a very flimsy excuse for normalisation. Because everybody pays lip service to the so-called two-state solution while they sit back and allow Israel to destroy it.”

Marshall: “I wonder though how young Palestinians see all of this; this rapprochement between a number of Arab states and Israel. They want jobs, they want opportunity, they’ve grown up seeing the old approach of negotiations fail time and time again. Might there be – could you concede – some level of public support in the West Bank and Gaza for leaders to try something new?”

Ashrawi: “I think there is support for something new but certainly it’s not capitulation. And it’s not entering into collusion with Israel. Actually, if you listen to the younger generation, they’re quite upset with the older one. They’re upset with my generation and the older generation: people who thought that you could have a negotiated settlement with Israel. They feel that they’ve been betrayed by the Oslo Agreements. They feel that their leadership has not stood up to Israel per se and they feel actually that they have to adopt a multi-faceted comprehensive system of rights, of freedom, of justice. And I think the whole concept of resistance is now being reformulated.”

Those latter claims were later challenged by contributor Noga Tarnopolski.

As we see, BBC World Service radio’s idea of providing listeners with analysis of “a key news story” included contributions from an inadequately introduced Iranian regime mouthpiece, a senior member of a Palestinian terrorist organisation and a Palestinian career politician and founder of an anti-Israel political NGO who – as the BBC is presumably aware – has made her opposition to peace agreements between Israel and countries in the region amply clear.