Among the coverage of last week’s terror attack in Tel Aviv on BBC radio stations was an item aired in the April 8th edition of BBC Radio 4’s ‘World at One’.

While providing listeners with relatively little information about the attack itself or the victims, that interview with Israel’s minister of communications does perhaps provide some insight into how the BBC explains to itself an issue it consistently refuses to name: Palestinian terrorism.

Presenter Jonny Dymond opened the item (from 37:51 here) by telling listeners of “the killing of another two citizens” who were “gunned down at random” before continuing with an introduction which unsurprisingly did not include the words terrorism or terrorist even once. 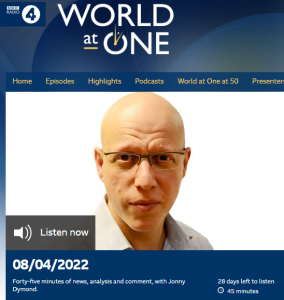 Dymond: “The fourth such attack in three weeks: killings carried out by Palestinians or Arab citizens of Israel. This is the worst series of attacks since 2006 and it’s raised fears of a spiraling security situation. No group has taken responsibility. The man whom the Israeli authorities say carried out the attack – from the city of Jenin in the occupied Palestinian territories – was killed by the security forces.”

Jenin has of course been under Palestinian Authority rule for twenty-six years.

Minister Yoaz Hendel spoke about two issues the BBC generally avoids: Palestinian incitement “hailing the terrorist as a hero”, including on social media, and the celebrations of the attack seen in places such as Gaza and Jenin. He described Israel as trying to “fight extreme voices in the Palestinian Authority and Israeli Arab society” while also trying to “encourage moderates”.

Dymond’s reply to those statements included a facile and almost caricatural portrayal of the Palestinian-Israeli conflict:

Dymond: “Every person with a shred of humanity will feel the pain of the friends and family of those who have been killed over the past few weeks. People are also aware that there is little or nothing in the way of a peace process. You say you are trying to encourage the moderates but there is enormous frustration – desperation even – amongst the Palestinians. How are you trying to encourage them when all they see is oppression and occupation?”

Hendel responded by stating that any such frustration does not excuse terror, going on to say:

Dymond closed the interview at that point with the words “OK, we’ll leave it there”.

In line with BBC editorial guidelines, Dymond avoided using the words terror, terrorism or terrorist throughout the item, leaving that up to his Israeli interviewee.

Apparently though BBC editorial guidelines do not preclude the promotion of trite and context-free ‘explanations’ for terrorism that absolve Palestinians of all agency and responsibility while whitewashing events such as the Palestinian terror attacks intended to derail the Oslo Accords stage of the ‘peace process’.