The May 5th terror attack in the town of Elad in central Israel was the topic of two reports published on the BBC News website’s ‘Middle East’ page.

The first of those reports appeared several hours after the incident took place and its headline – “Elad attack: Three dead in central Israeli city” – failed to clarify that it concerned a terror attack. 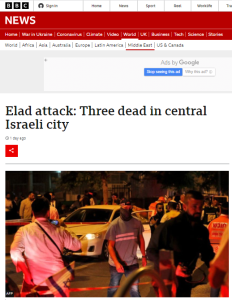 All five versions of that report have the same opening line:

“Three people have been killed and others wounded in what police say is a suspected terror attack in the central Israeli city of Elad.” [emphasis added]

That is the only mention of the word terror in the entire report.

The various versions of the report suggest that there is some confusion at the BBC regarding the number of people murdered in terror attacks since March. In the initial version readers were told that:

“At least 15 people have been killed in Israel and the West Bank in the latest flare-up.”

In the next three versions of the report readers found an amended version of that statement which promotes the notion of equivalence between terror attacks and subsequent counter-terrorism operations.

“Sixteen Israelis, including an Israeli Arab policeman, and two Ukrainians have been killed in the attacks in Israel and the West Bank in the latest flare-up.

The last version of the report states:

“Seventeen Israelis, including an Israeli Arab policeman, and two Ukrainians have been killed in the attacks in Israel and the West Bank in the latest flare-up.

All versions of this report use the term al Aqsa Mosque compound rather than Haram al Sharif as instructed by the BBC News style guide and fail to clarify that the violent incidents at that site in recent weeks were initiated by Palestinians.

Initial version: “There have also been violent clashes at the al-Aqsa Mosque compound in Jerusalem, a flashpoint site that is deeply important to Muslims and Jews, who know it as the Temple Mount.”

Subsequent versions: “There has also been Israeli-Palestinian violence at a flashpoint holy site in Jerusalem revered by Muslims as the al-Aqsa mosque compound and by Jews as the Temple Mount.”

In the last four versions of the report readers are told that:

Those ceremonies take place on the Day of Remembrance for the Fallen Soldiers of Israel and Victims of Terrorism and they commemorate members of the security forces regardless of whether or not their deaths occurred during “wartime”. The fact that the BBC thought it appropriate to exclude the word terrorism in favour of the term “victims of deadly attacks” of course speaks volumes.

All versions of this report on a fatal terror attack in Israel close as follows:

“The Jewish state was founded on 14 May 1948, and anniversaries are calculated in accordance with the Hebrew calendar.

On 15 May, Palestinians mark the creation of Israel with a day of mourning called al-Naqba, Arabic for “catastrophe”.”

On May 6th that report was replaced by another one with no mention of the word terror in its headline: “Israel hunts Palestinian axe attackers who killed three”. 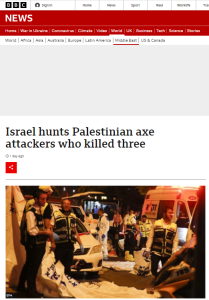 The only mention of terrorism in all three versions of that report comes in quotes from Israelis. Readers find an embedded Tweet from Israel’s prime minister which uses the words terrorist and terrorists, along with an eye-witness account:

‘”We were in the synagogue when the warden shouted: ‘Terrorist! Terrorist!’,” an eyewitness named Mordechai Chachmon said, the Times of Israel reported.

“We went outside and we saw [an attacker] running along a path… and hitting anyone in front of him with an axe to the head. Both of [the attackers] were shouting Allahu Akbar [God is greatest].”’

Perusal of the relevant Times of Israel report shows that the BBC elected to substitute the word terrorists with “attacker” and “attackers”:

‘“We were in the synagogue when the gabai (warden) shouted, ‘Terrorist, terrorist,’” an eyewitness named Mordechai Chachmon told reporters at the scene.

“We went outside and we saw [one of the terrorists] running along a path… and hitting anyone in front of him with an axe to the head. Both of [the terrorists] were shouting Allahu Akbar [God is greatest].”’

All versions of the report again promote the notion of equivalence between terrorism and counter-terrorism operations:

All versions of the report again use the term al Aqsa Mosque compound rather than Haram al Sharif:

“Meanwhile the Palestinian militant group Hamas, which governs the Gaza Strip, praised what it called an “heroic operation”. It said it was in response to Israeli action taken at the al-Aqsa mosque compound in Jerusalem, which has been the scene of frequent clashes between Palestinians and Israeli police. […]

It has coincided with rising tensions over the flashpoint holy site in Jerusalem known to Muslims as the al-Aqsa mosque compound and Jews as the Temple Mount.”

The first two versions of the report closed by telling readers that:

“The site [Temple Mount] has seen recurrent violence over the past month, with Palestinian radicals throwing stones and setting off fireworks towards Israeli police and an adjacent Jewish holy site, and police using force to disperse them.”

Interestingly, that part of the paragraph was amended several hours later and it now reads:

“The site has seen recurrent violence over the past month, with hundreds of Palestinians injured there in the clashes with police.”

Listeners to BBC World Service radio on May 6th heard reports on the attack from Tim Franks in the afternoon edition of ‘Newshour’ (from 19:52 here),  in the evening edition of the same programme (from 18:27 here) and on the ‘OS’ programme (from 06:41 here).

None of those items includes any mention at all of the words terror, terrorism or terrorists and as in the written reports, BBC audiences were not given any information about the victims of the attack, including their names.

James Menendez: “…but we are going to be heading to Israel now, which in recent weeks has seen some of the worst violence for years. A spate of deadly attacks by Palestinians and Arab Israelis have now claimed 17 lives and raids by Israeli security forces in the occupied West Bank have left more than 20 dead. Well in the latest incident on Thursday evening three men were killed and several others injured in the town of Elad, not far from Tel Aviv.”

Julian Marshall: “And the attack of course came on Israel’s Independence Day – a public holiday marking the country’s founding. Do people feel that was the reason for the attacks?”

Julian Marshall: “And disputes over Jerusalem’s holy sites; is that what lies at the bottom of this recent increase in violence?”

Ben James: “…let’s spend some time in Israel next where the authorities are trying to find two Palestinians suspected of killing three Israelis in an axe and knife attack in central Israel. This took place in the predominantly ultra-orthodox Jewish town of Elad on Thursday night. Seven others were wounded, two seriously.”

Tim Franks: “…what happened last night according to the police was that they [the suspects] were involved in this axe and knife attack on a park.” [emphasis added]

As we see, the BBC continues to display double standards in its use of language when reporting terrorism even as it ignores its own style guide’s instructions relating to Temple Mount.

Why is the BBC using the language of Hamas? (Jewish Chronicle)