Last month we repeatedly had cause to make the following observations about BBC coverage of violent rioting on Temple Mount during Ramadan:

“none of these items […] provided relevant information concerning the pre-planned and organised nature of that morning’s rioting or the fact that Hamas and other terrorist organisations had been inciting precisely such violence for over a month.”

On May 24th the Israel Security Agency announced that it had arrested members of an active Hamas cell in Jerusalem. The Jerusalem Post reports:

“The cell was led by Rashid Rashek, a prominent Hamas operative in Jerusalem’s Old City, the Shin Bet said. Along with Hamas operative Mansour Tzafadi, from Abu Tor in southeastern Jerusalem, he planned a shooting attack or suicide bombing in the capital, it said.

According to the Shin Bet’s investigation, Rashek recruited a number of operatives in Jerusalem who would riot in the city’s eastern neighborhoods as well as on the Temple Mount during Ramadan “to destabilize the Temple Mount and Jerusalem.” The operatives brought fireworks, Hamas flags and other paraphernalia to use during the riots.”

The BBC News website also published a report about that ISA announcement on its ‘Middle East’ page on May 24th. Written by Raffi Berg and headlined ‘Israel says Hamas plot to kill prominent politician in Jerusalem thwarted’, that report includes the following: 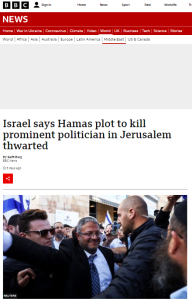 Israeli-Palestinian tensions in the city have soared in recent weeks, following clashes in and around a flashpoint holy site, […]

Shin Bet says the cell was led by a prominent Hamas operative who is alleged to have set up a network of supporters to stir up recent unrest in the Old City. Hamas flags were waved in the compound of a holy site revered by Jews and Muslims, which was the scene of repeated clashes between Palestinians and Israeli police over the past two months.

The five men were involved in rioting in East Jerusalem and in the compound, Shin Bet says.

The site, known to Muslims as Haram al-Sharif (Noble Sanctuary), contains the Al-Aqsa Mosque, which is the third holiest place in Islam. It is also known to Jews as the Temple Mount and is the holiest site in Judaism.”

Seeing as the BBC News website’s Middle East editor is now aware of this example of Hamas’ practical efforts to provoke violent clashes at Temple Mount, perhaps BBC audiences can expect him and his colleagues to make more of an effort to ensure that their future reporting on Palestinian rioting in Jerusalem provides more of such relevant context and less promotion of Hamas talking points from partisan interviewees.

BBC COVERAGE OF VIOLENCE IN JERUSALEM – PART ONE