On the evening of May 26th the BBC News website published a report about a foregone conclusion. 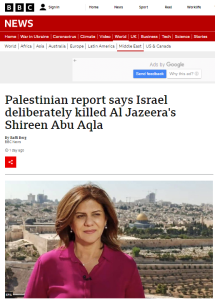 “A Palestinian investigation has concluded that Al Jazeera reporter Shireen Abu Aqla was intentionally shot dead by an Israeli soldier.”

The BBC’s report makes no effort to explain to readers in its own words that the Palestinian investigators had no way of proving definitively that the person who fired the fatal shot was a member of Israel’s security forces, let alone that the shooting was ‘deliberate’ or ‘intentional’.

“At a news conference on Thursday in the West Bank city of Ramallah, Palestinian Attorney General Akram al-Khatib said the bullet that killed Abu Aqla was a 5.56mm (0.219 inch) round with a steel component used by Nato forces.”

Reporting on the same story, the Times of Israel noted that:

“According to Khatib, the bullet used to kill Abu Akleh was a 5.56mm round that he claimed was fired by a Ruger semi-automatic sniper rifle, which Israeli forces are not known to use.” [emphasis added]

Linking to a BBC News website report from August 2021 which promoted claims made by the political NGO ‘Human Rights Watch’, the report states:

“Al Jazeera says it is referring the case to the International Criminal Court (ICC), as well as Israel’s bombing of the channel’s office in Gaza during its conflict with militant groups there in May 2021.

The ICC has the power to investigate and prosecute suspected war criminals who are not before the courts of individual states, although Israel does not recognise its authority. The Palestinian Authority says it has already referred Abu Aqla’s killing to the ICC.”

In contrast to the absence of qualification of the Palestinian Authority’s unevidenced claim that Abu Akleh was shot “deliberately”, the BBC did consider it appropriate to use superfluous qualifying punctuation in relation to the mission of the IDF forces operating in Jenin on that day.

“The Israeli military said its forces had gone into Jenin to apprehend “terrorist suspects” following a wave of deadly attacks against Israelis by Palestinians, two of whom came from the Jenin district.”

The BBC’s report re-promotes several of the corporation’s previous reports on the story, including a video and a tribute from the BBC’s chief international correspondent.

With the Palestinian Authority president having given his ‘verdict’ just hours after the incident occurred, it is hardly surprising that an ‘investigation’ lacking complete ballistics analysis by that authority arrived at an identical conclusion.

Nevertheless, we see that – as it has been doing ever since news of the incident broke – the BBC is once again quite happy to provide uncritical worldwide amplification for unproven claims from interested parties about the circumstances of the death of Shireen Abu Akleh.