A Guardian report by their Jerusalem correspondent Bethan McKernan, and photo journalist Quique Kierszenbaum, (“Clashes in Jerusalem as Israeli nationalists march through Muslim Quarter”, May 29), introduces a clear error in the first sentence:

Thousands of Israeli religious nationalists have paraded through Muslim parts of the Old City of Jerusalem, putting the city on edge after violence during the same event last year helped spark an 11-day-war between Israel and Hamas, the Palestinian militant group in the Gaza Strip.

An article in The Times the next day, (“Violence flares as Israelis march through Muslim quarters of Jerusalem”, May 30), by Anchal Vohra, made a similar claim:

Last year the [Jerusalem Day] march led to an 11-day war between the Israeli Defence Forces and the Palestinian group Hamas, which rules the Gaza Strip, as the latter fired rockets into Jerusalem.

However, the march did not “lead to” or “spark” the May 2021 war between Hamas and Israel.

Sirens in Israel warning of Gaza rocket fire sounded on May 9, the day in question, in the Jerusalem area moments after a 6 P.M. “ultimatum” issued by Hamas for Israel to remove police from Jerusalem’s Temple Mount.  As was reported widely at the time, Israel’s refusal to heed Hamas’s demands – and the terrorist group’s subsequent decision to launch rockets at Israeli civilians – was the immediate cause of the 11-day war.

The Jerusalem Day march in 2021, which had already been re-routed to keep clear of the Muslim Quarter, was cancelled by police a few minutes after it began when, shortly after 6 P.M., Hamas began firing rockets.  Further, as the march ended shortly after its start, and, again, didn’t go through Muslim areas, contrary to McKernan’s claim, there was no “violence”.  (The march was rescheduled and took place in June, after the war.)

After our complaint to The Times, they corrected the sentence, which now accurately states narrowly that the march “coincided with” the war:

Last year the march coincided with the outbreak of an 11-day war between the Israeli Defence Forces and the Palestinian group Hamas, which rules the Gaza Strip, as the latter fired rockets into Jerusalem.

Returning to the Guardian: Oddly, in the final paragraph of McKernan’s piece, she writes that “violence at [Al Aqsa Mosque] led Hamas to fire a barrage of rockets at Jerusalem, sparking last May’s war”, contradicting her earlier claim that the Jerusalem Day march was the cause. 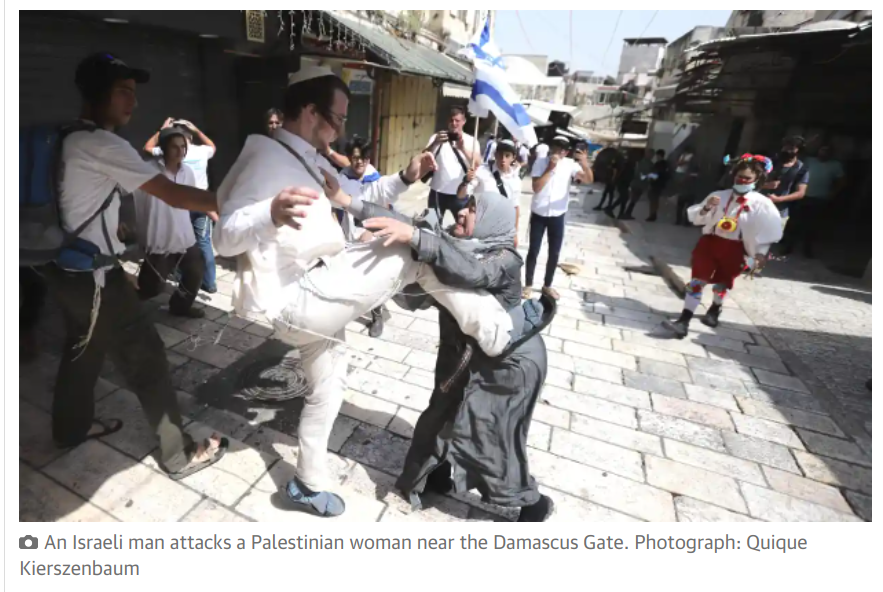 First, just looking at the still shot, it’s far less than clear that the Israeli man was “attacking” the Palestinian woman or who initiated the confrontation. Read this post by blogger Israellycool, who argues that the photo – as well as a short video of the incident – doesn’t provide nearly enough information to reach the Guardian’s conclusion that the Israeli instigated the violence.