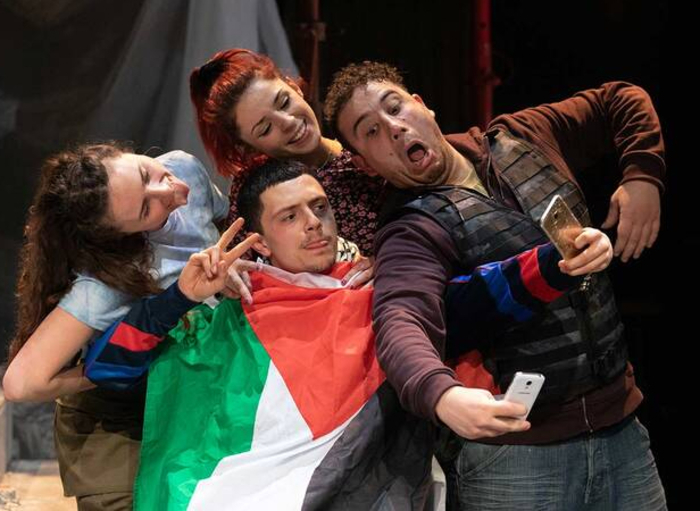 …… presumably so the author can include cheap shots, Benjamin Netanyahu is still the Prime Minister of Israel.

Sara Yadin a female IDF soldier is killed and a young Arab woman Salwa is killed in reprisal. The Fifth Intifada breaks out. For more detail see here and here.

After the antisemitic play ‘Seven Jewish Children’ and the ‘Hershel Fink’ antisemitic debacle in 2021 you’d think the Royal Court management would be more careful about showing an Israel Hatefest.

After a dance to Arab music including audience members (presumably to ingratiate with them – not that the woke London soi-disants last night seemed to need it….) came ‘Bibi Says’, a game like ‘Simon Says’. It rapidly degenerated into an anti-Israel rant – example: “Bibi says, be complicit in the oppression of the Palestinian People”. The main character Reem (Salwa is her daughter; the evil Israelis had previously killed another daughter age 12 in cold blood because that’s what they do, doncha know…) tells us that Bibi “is quite obviously a cunt’ (Uproarious laughter) and “Bibi wants to cripple a nation”.  Every Thursday, Reem and her husband like to go dogging in military areas (a ‘Red Zone’ appears –  again ludicrous). Speaking of Israelis who also go there to ‘dog’, Reem says “Fuck them so hard they’ll know what it’s like to be occupied”.

Towards the end of the play Reem’s (Hala Omran’s) eyes are wet: Crying to order is quite a talent!

Reem’s nephew Tariq spends most of the interminable 2 hours 50 minutes of the play stuck in the barbed wire around an Israeli settlement. The supposed brutality of Israelis is underlined by the failure of anyone to come to his aid.

We meet Adam, the father of Sara the murdered IDF soldier. If you’re thinking ‘Parents’ Circle’ ….  Forget It!  Reem says she wants to “mash Adam’s brain to Humous”.   In a deranged ahistorical rant Adam removes his shirt and is portrayed as an ultra-aggressive maniac who speaks of the inheritance of his “ great great great [he repeats the word about 200 times!] grandfather”. Of course the audience is meant to think that he’s a typical male Israeli.

From Reem we get the hackneyed invalid argument that more Palestinians have died than Israelis – she illustrates this with a bucket of 1448 pebbles for the Palestinian dead versus 6 for the Israeli dead. Yawn: The law of War allows defensive action that is proportionate to achieve the aim, it does not mandate an equal body count!

The Guardian reviewer of course salivated over the play:

This local focus on one family has echoes of Lorca, in its intractable grudge-bearing and cycles of violence. Reem tells us of the terror of the Red Zone, of Israeli troops taking sniper shots at unarmed Palestinians, of drone strikes on houses, of children being gunned down at point blank range – including her own 12-year-old girl and then a second daughter, Salwa (Sofia Danu). Directed by Omar Elerian, the production is many things at once: playful and tragic, baggy and taut, always pulling back from whimsy at the tipping point of self-indulgence. Just as we are lulled by a moment of comedy or metafictive silliness, violence comes careering around the corner.

As did the Woke Twitterati: 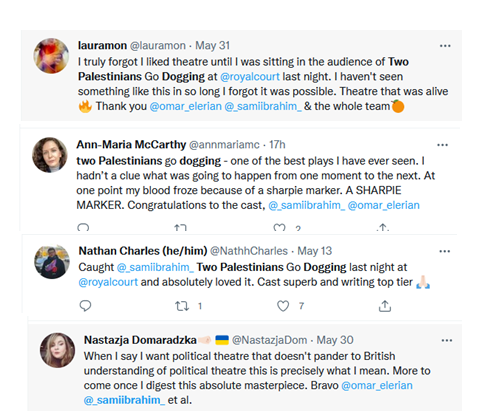 The truth: It’s a crude Israel Hatefest whose author has never been to Judea, Samaria or Gaza (and probably not to Israel). It incites antisemitism and – yet again – shame on the Royal Court!

Guardian and Times make the same error over 2021 war