Late on May 28th the BBC News website published a report by Raffi Berg on its ‘Middle East’ page under the headline ‘Jerusalem tensions high ahead of Israeli youth Flag March’. That report was subsequently amended twelve times, with its final version appearing on the afternoon of May 30th under the title ‘Jerusalem Flag March: Israeli nationalists stream through Muslim Quarter’. 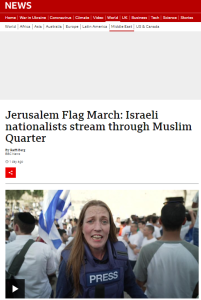 That final version includes an update:

“Update 30 May 2022: Abusive chants and threats which were made by some marchers against Palestinians have been included in this version of the story, in order to give a fuller picture of events. The report of the assault on the BBC team, removed as the story was updated, has been restored.”

The framing of the story that will become ‘permanent public record’ on the BBC News website is apparent in the article’s opening lines:

“Thousands of flag-waving Israelis have marched through Muslim areas of East Jerusalem’s Old City in an event seen as highly provocative by Palestinians.

The Palestinian presidency said Israel was “playing with fire”. It comes at a time of particularly high tensions following months of deadly incidents.”

As in reporting from other international media organisations, for the BBC only Israeli flags are “highly provocative” and only Israelis are described as “nationalists”. That cognitive dissonance becomes all the more glaring as the report goes on to state:

“The Palestinians claim Israeli-occupied East Jerusalem as the capital of a future state of their own – ruled out by Israel – and political displays by either side are viewed by the other as direct challenges.”

As has often been the case in the past, the BBC’s explanation of the Jerusalem Day national holiday is lacking. Not only does it fail to clarify that the date is marked to celebrate the reunification of the city, it completely erases the 19-year illegal Jordanian occupation of parts of Jerusalem from the story.

“The march celebrates Israel’s capture of East Jerusalem in the 1967 war.

Israel regards the whole of Jerusalem as its capital, something rejected by most countries and the Palestinians.”

As ever, the BBC’s politicised account fails to note the inclusion of Jerusalem in the territory assigned by the League of Nations to the creation of a Jewish homeland. The belligerent British-backed Jordanian invasion and subsequent ethnic cleansing of Jews from districts including the Old City in 1948, together with the destruction of synagogues and cemeteries, is completely ignored, as is the fact that the 1949 Armistice Agreement between Israel and Jordan specifically stated that the ceasefire lines were not borders. Israel’s warning to Jordan not to participate in the Six Day War is also eliminated from the BBC’s ‘minimalist’ account of events.

“Earlier, there were violent confrontations between Palestinians and Israeli police at a flashpoint holy site in the Old City. Shortly after, hundreds of Jewish visitors, including a far-right MP, ascended the hilltop site, where some danced, waved Israeli flags and bowed down to pray, before being stopped by police. Palestinians view such actions as incendiary and militant groups had warned they would not tolerate it.”

The BBC refrains from clarifying that those “violent confrontations” occurred after masked rioters barricaded themselves inside al Aqsa mosque and threw rocks at police officers ahead of the opening of the site to visits by non-Muslims.

Neither does the BBC’s report explain to readers that the threats and incitement from assorted Palestinian terrorist groups were issued long before the “Jewish visitors” arrived at the site. It does however provide uncritical amplification for Palestinian Authority talking points and partisan terminology:

“Israel is irresponsibly and recklessly playing with fire by allowing settlers to desecrate the holy sites” in East Jerusalem, the president’s spokesman Nabil Abu Rudeineh said, according to the official Palestinian news agency Wafa. Palestinian officials often describe Israelis who visit the holy site revered by Muslims and Jews as settlers and their presence there as a desecration.”

The BBC did not bother to inquire whether the PA also considers actions such as rock and petrol bomb throwing, urination, displaying Hamas flags or placing agricultural machinery inside the al Aqsa mosque to be ‘desecration’ of a holy site. It did however find fit to promote the opinion of an inadequately identified “activist”.

“One Palestinian Jerusalemite activist, Usama Barham, told the BBC that “what happened this morning inside our holy mosque [at the site] was much more dangerous than the Flag March”.”

The report goes on to tell readers that:

“Last year, a devastating 11-day conflict between Israel and Palestinian militants in Gaza erupted on Jerusalem Day when Gaza’s Hamas rulers fired rockets towards the city after Israeli police and Palestinians clashed at the holy site.”

Readers may recall that the BBC failed to report the premeditated nature of the rioting on Temple Mount in May 2021, which actually commenced before Jerusalem Day.

Notably, the BBC’s report includes a graphic and text that once again demonstrates that – despite its own style guide’s instructions – the BBC has fully adopted the politically motivated Palestinian narrative relating to that site. 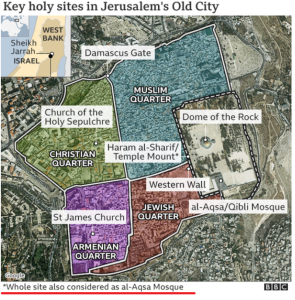 “The march ended at the Jewish holy site of the Western Wall, which abuts the al-Aqsa mosque compound.” [emphasis added]

The report closes with a reference to the unrelated topic of the death of an Al Jazeera journalist and promotion of a link to the BBC News website’s recent report parroting the findings of a Palestinian Authority ‘investigation’.

“This year’s march took place amid an already highly charged atmosphere between Israelis and Palestinians.

A wave of deadly attacks on Israelis by Palestinians or Israeli Arabs, and the deaths of dozens of Palestinians, including attackers, militants and civilians, by Israeli forces has fuelled anger on both sides.

It also follows recriminations over the killing of Al Jazeera Palestinian-American reporter Shireen Abu Aqla, shot dead while reporting on an Israeli military operation in the occupied West Bank on 11 May.”

Despite its repromotion of that recent report, yet again the BBC made no effort to explain to readers in its own words that the Palestinian investigators had no way of proving definitively that the person who fired the fatal shot was a member of Israel’s security forces, let alone that the shooting was ‘deliberate’ or ‘intentional’.

THE PALESTINIANS HAVE NO NATIONALISTS (CAMERA)

GUARDIAN AND TIMES MAKE THE SAME ERROR OVER 2021 WAR