On the evening of June 14th BBC audiences were presented with reports about the announcement of a visit by the US president to the Middle East in July. 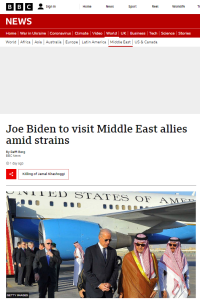 “Mr Biden will hold talks in Israel with Prime Minister Naftali Bennett. Mr Bennett, a right-wing nationalist, is a champion of Israeli settlement-building in the occupied West Bank – something the Biden administration has said it “strongly opposes”. Settlements there are considered illegal under international law, though Israel disputes this.”

As ever, the BBC failed to meet its supposed editorial standards of impartiality by refraining from informing its audiences that there are others besides Israel who reject the categorisation of civilian communities in Judea & Samaria as “illegal”.

The report goes on to show that – in contrast to his description of the Israeli prime minister as “a right-wing nationalist” – the BBC News website’s Middle East editor apparently sees no reason to apply those or any other signposting labels to a Palestinian president whose term of office ended well over a decade ago.

“The president will also meet his Palestinian counterpart, Mahmoud Abbas, in the West Bank. The senior administration official said Mr Biden would be “reaffirming his lifelong commitment to a two-state solution” to the Israel-Palestinian conflict – a concept which envisages the creation of a Palestinian state alongside Israel. Mr Bennett has said this is something he would never allow.”

As is also usually the case in BBC reporting, portrayals of history begin in June 1967 with no mention made of the 19-year illegal Jordanian occupation of parts of Jerusalem or the status of that area before it was invaded by Jordan.

“Palestinians see East Jerusalem as the capital of a future independent state. Israel considers the whole of Jerusalem – including the East, which it occupied in the 1967 Middle East war – as its indivisible capital.”

“We urge [the Biden] administration to secure genuine progress on human rights before acting in a manner that would bolster the status of the crown prince and his government,” they said.”

However the BBC did not inform its audience that among those “13 human rights groups” are ‘Human Rights Watch’ and ‘DAWN’ which is headed by Sarah Leah Whitson. Readers may recall that Whitson – then representing ‘Human Rights Watch’ – made a controversial fund-raising trip to Saudi Arabia in 2009. In 2020 HRW put out a statement (not reported by the BBC at the time) concerning a 2012 donation it had received from a Saudi businessman  “that included conditions that the funds not be used to support HRW’s work on lesbian, gay, bisexual, and transgender (LGBT) rights in the Middle East and North Africa.”

The ability of BBC audiences to make up their own minds regarding that statement from ‘human rights groups’ about the US president’s upcoming visit to Saudi Arabia would of course have been enhanced had that information about the fund-raising activities of the most prominent of those groups been provided.