As regular readers are no doubt aware, the BBC’s editorial guidelines on impartiality include a section titled ‘Contributors’ Affiliations’:

Contributions to BBC content can of course come in various forms, including interviews or comment on a particular topic, campaign or event. The same editorial guidelines go on to relate to ‘Campaigns and Initiatives’ and ‘Social Action’ and include a clause titled ‘Scrutiny’:

“4.3.20 We should ensure that appropriate scrutiny is applied to those who are in government, or otherwise hold power and responsibility, but also, as appropriate, to those who oppose or seek to influence them, such as campaigners, lobbyists, opposition parties and others; this may include scrutiny of views and arguments expressed on our output by the audience.”

One obvious requirement should be the disclosure of the identity of people and/or organisations running any campaign that the BBC decides to highlight. However an article relating to the US president’s recent Middle East visit written by Barbara Plett Usher which was published on the BBC News website on July 15th under the title ‘Why Biden’s Saudi trip has proved so thorny’ failed to meet that basic standard.

The main photograph illustrating that article is captioned as showing “activists”: 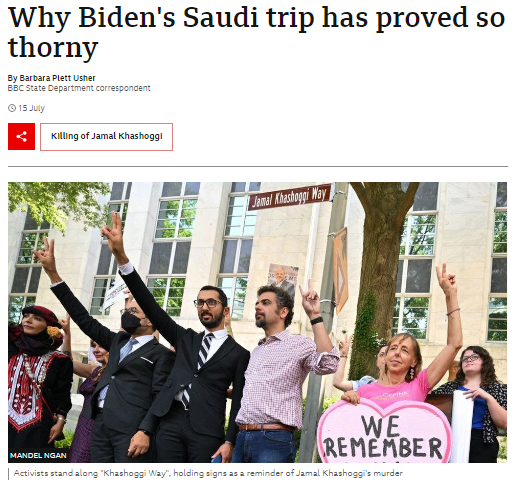 “The day after the White House announced President Joe Biden’s trip to Saudi Arabia, a group of activists gathered to christen [sic] the street outside its Washington embassy “Khashoggi Way”.

They declared it would be a daily reminder to the diplomats “hiding behind those doors” that the kingdom’s government was responsible for the 2018 murder of the Saudi journalist and dissident Jamal Khashoggi.

And they denounced President Biden’s decision to meet the man fingered by US intelligence as having ordered the killing – Crown Prince Mohammed bin Salman, widely known as MBS.

“If you have to put oil over principles and expediency over values,” said Khashoggi’s fiancé Hatice Cengiz in remarks read at the event, “can you at least ask where is Jamal’s body? Doesn’t he deserve a proper burial?””

As we see, Plett Usher made no effort whatsoever to inform BBC audiences of the identity of those “activists” or their “affiliations, funding and particular viewpoints”. Other reports on that June 15th event show that participants included representatives of ‘Code Pink’ and that the event was co-organised by ‘DAWN’, as suggested by the appearance of Sarah Leah Whitson, Abdullah Alaoudh and others from that NGO in the photo used by the BBC.

Notably, the day before that event took place, the BBC News website amplified another campaign involving ‘DAWN’, also without providing relevant information about that organisation.

Plett Usher’s article also promotes comment from representatives of various think tanks, again without providing any information about their “affiliations, funding and particular viewpoints”. One of those think tanks is described as “left-leaning”:

“And he’s [Biden] defended his decision to go [to the conference in Jeddah] by saying he’s acting partly at Israel’s request. He started his trip by stressing the importance of Israel becoming “totally integrated” in the region.

A big part of that is helping to normalise Israel’s relationship with Saudi Arabia, with a wider emphasis on closer Arab security ties with Israel. The idea is to coordinate air defence systems to deal with the threat of missiles from Iran and its allies.

The plan has gained momentum given stalled US efforts to revive the Iran nuclear agreement, Iran’s rapidly progressing nuclear programme, and an increase in regional missile attacks from Iran’s Yemen Houthi allies.

Paul Pillar of the left-leaning Quincy Institute for Responsible Statecraft, called it a “military alliance against Iran”.

Readers would of course have found it useful to know that the Quincy Institute is by no means an impartial organisation on the topic of US-Israel relations (or Iran) and that its quoted representative Paul Pillar believes that there are “attempts to silence criticism of Israel by tarring such criticism with the label of anti-Semitism”, that “Tel Aviv” is trying to “sabotage the US in the Middle East”, that arguments against the JCPOA “make no sense” and that the IRGC “don’t belong on the foreign terror list”.

When BBC journalists uncritically promote catchy sound-bites from inadequately presented commentators or campaigns run by unidentified parties with unexplained agendas they are not meeting their organisation’s obligation to “build people’s understanding” of topics in the news. They are however revealing their own disregard for the editorial guidelines intended to ensure that the corporation adheres to that contract with its funding public.

BBC FRAMING OF US PRESIDENT’S UPCOMING ME VISIT

PATCHY COVERAGE OF IRAN ‘SIDE DEALS’ IN BBC NEWS REPORTING