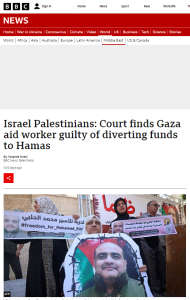 Knell’s account of that story runs to 1212 words and opens as follows:

“The original claims were jaw-dropping: Israeli security officials accused a Gaza aid worker of diverting up to $50m (£41.5m) of donations to the Islamist militant group Hamas.

It was alleged the money – which would have amounted to one of the biggest thefts of humanitarian funds in history – paid for rockets and tunnels used to attack Israel.

After exactly six years in detention, Mohammed Halabi sat solemnly in the dock at Beersheba District Court in southern Israel as he was found guilty of 13 charges, including belonging to a terrorist organisation and transferring “considerable sums” to Hamas.”

The next four paragraphs set the tone for the article as a whole, with the first three amplifying messaging from individuals and organisations (including a link to a statement from Halabi’s employer) who refuse to accept the court’s verdict:

“His employer, the global charity World Vision, stated: “In our view there have been irregularities in the trial process and a lack of substantive, publicly available evidence.”

International human rights groups described the verdict as “a miscarriage of justice”, saying it was not supported by independent audits, with key evidence kept secret.

The head of the UN human rights office in the Palestinian territories said there had been “enormous pressure on Mr Halabi to confess in the absence of evidence”.”

“However, judges said they relied on what they described as a “credible and corroborated” confession given to Israel’s Shin Bet intelligence service.”

In all, thirty percent of the article’s word count is given over to the amplification of statements from organisations or people who refuse to accept the court’s verdict, including ‘World Vision’ (283 words), unidentified ‘human rights groups’ and the UN, Halabi’s lawyer (133 words) and Halabi’s family (94 words). Subheadings used throughout the article include ‘Such a good man’, Confession ‘coerced’ and Family heartbreak.

In contrast, Knell devotes just 133 words to descriptions of the summary issued by the court and even that comes immediately after amplification of an inaccurate and misleading claim from Halabi’s lawyer:

“All the judge said was that the security forces cannot be wrong. That’s why he was convicted.”

“World Vision asked one of the largest international accountancy firms, Deloitte, and global lawyers DLA Piper to carry out an independent forensic audit of its Gaza operations.

Scrutiny of payments and 280,000 emails, as well as dozens of interviews, found no evidence of missing funds or criminal behaviour.

Neither did an Australian government review of funding for World Vision.”

Knell however refrains from clarifying that World Vision has refused to make the audit it commissioned public and she ignores the findings of an additional audit.

Other ‘World Vision’ claims promoted by Knell include:

“However, from the outset World Vision found serious holes in the Israeli case. Its entire Gaza budget over the previous decade had been $22.5m – which it said made the original allegation of the diversion of over twice that amount “hard to reconcile”.

Large tenders for Gaza contracts were also handled by the Jerusalem office and it did not import iron ore into the territory.”

Knell does not tell her readers that the claim about the Gaza office budget does not take into account the budgets of the organisation’s additional regional offices. Although Knell twice uses the term “iron ore”, the version of the court’s (Hebrew language) ruling which was released to the public – and journalists – mentions “iron originally destined for agriculture” and “iron fences” rather than “iron ore”.

Both the structure and content of Yolande Knell’s report provide clear indication of the BBC Jerusalem bureau’s chosen framing – and takeaway messaging – of this story about an NGO employee convicted of very serious crimes.

FIVE THINGS YOU NEED TO KNOW ABOUT WORLD VISION