The same event was the topic of a report credited to Raffi Berg which was published on the BBC News website’s ‘Middle East’ page later on the same day under the headline “Six killed as Israel targets militants in West Bank raid”. 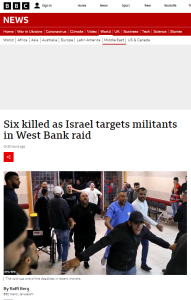 The report opens with the BBC’s usual avoidance of the terms terror and terrorist:

“Five Palestinians, including at least three gunmen, have been killed in a major Israeli raid against a militant group in the occupied West Bank.”

“At least three who died have been identified as members of Lion’s Den, including a senior commander and founder of the group, Wadi al-Houh, 31. Israeli media say all five belonged to it although, according to locals. two of those killed were civilians uninvolved in the fighting.

“Palestinian media identified the other killed men as members [of the Lion’s Den group] as well. The group later confirmed the members’ deaths and said al-Houh was a “leader.” In a statement, Lion’s Den also vowed revenge following the raid.”

The second paragraph of Berg’s report relates to an incident in a different location:

“A sixth Palestinian was shot dead by Israeli troops who were attacked with stones in a protest against the raid, Palestinian medical sources say.”

“A Palestinian, identified as Qusai Tamimi, 19, was also shot dead in the town of Nabi Saleh further south when youths threw stones at Israeli soldiers in protest at the Nablus raid, reports say.”

Both the Jerusalem Post and the Times of Israel reported that Tamimi was throwing an explosive device at IDF soldiers when he was shot.

Part of Berg’s report is given over to playing catch-up on topics that the BBC has failed to cover seriously in recent months (see ‘related articles’ below). BBC audiences have to date not been informed, for example, of the Palestinian Authority’s failed efforts to dismantle the Lion’s Den group in order to avoid both an inevitable Israeli counter-terrorism operation and internal disarray. One paragraph in Berg’s report however suggests that the BBC is fully aware of that story – and that it apparently does not find the proposal to include terrorists in the Palestinian security forces newsworthy.

“The group had recently defied calls from the Palestinian Authority (PA), which governs Nablus, to give up its weapons in return for becoming part of the official Palestinian security forces.”

Relatedly, readers are also told that:

“What will worry the watching diplomatic community, the BBC’s Tom Bateman reports from Nablus, is that this raid also saw exchanges of fire between Israeli troops and members of the official, internationally backed Palestinian security forces.”

Berg does not clarify that Fatah’s Al Aqsa Martyrs Brigades put out a statement claiming that its men, along with members of the Palestinian Authority security forces, were involved in those exchanges of fire. This is of course by no means the first time this year that PA security forces personnel (some of whom also belong to terror groups) have taken part in terror attacks or gunfights but to date the BBC has avoided providing its audiences with any serious information on that topic and its implications.

In his portrayal of the Lion’s Den terror group, Berg avoids telling readers of its record of attacks and attempted attacks in the BBC’s own words:

“The Lion’s Den group was formed following near daily arrest raids by Israeli forces targeting militants, concentrated in the northern West Bank. It is believed to number a few dozen members and has carried out, or attempted, attacks around the Nablus area and as far afield as Tel Aviv, according to the Israeli military.” [emphasis added]

As has been the case in previous BBC reports, Berg refers to “a wave of deadly attacks against Israelis earlier this year” but fails to clarify that such attacks – some fatal – have continued since then.

“There has been an intensification of violence between Israel and Palestinians in the West Bank in recent weeks amid an ongoing Israeli operation to root out militants following a wave of deadly attacks against Israelis earlier this year.”

Berg closes his article with a chorus that the BBC has chosen to amplify repeatedly in recent weeks:

“The raid came amid a broader, ongoing operation launched by the IDF named Break the Wave after 17 Israelis and two Ukrainians were killed by Palestinian and Israeli Arab attackers earlier this year.

On the Palestinian side, more than 100 people, including militants, attackers and civilians, have been killed in the West Bank and East Jerusalem since January amid the upsurge in violence, making this year one of the deadliest for Palestinians since 2015.”

The significance of the date 2015 – a previous wave of Palestinian terrorism – is not made clear to readers.

As of the end of September 2022, twenty-one fatalities resulting from Palestinian terrorism had been recorded and a further two occurred during October. That means that this year is also the “deadliest” for Israelis since 2015 – but the BBC is clearly less interested in that statistic.

This article promotes two previous reports by the BBC Jerusalem Tom Bateman, neither of which provides the background necessary for full understanding of this story but the second of which similarly focuses audience attentions on the topic of Palestinian casualties:

BBC NEWS CONTINUES TO SKIRT THE BACKGROUND TO EVENTS IN JENIN