Back in April the BBC announced a new “open door comedy show”:

“DMs Are Open is the new showcase for the public’s comedy writing talents on Radio 4 and 4 Extra. This debut six-part series will feature a mixture of sketches, one liners, and voice notes written by listeners. Hosts Athena Kugblenu (Mock The Week, The News Quiz) and Ali Official (social media content creator and star of Muzlamic) will be joined by a cast of comedians who bring to life gags submitted by contributors.”

Members of the public were invited to submit contributions:

“DMs Are Open is a show made up of sketches and commentary, but isn’t limited to topical, political news. We’re less interested in the stuffy Westminster stories, and more interested in the unusual news, trending topics, showbiz stories and the weird internet memes that everyone’s been talking about this week.

A bit less Dominic Raab, a bit more Joe Rogan. A bit less the Today Programme, a bit more Twitter Trending. A bit less Boris Johnson, a bit more Molly Mae. There’s still room for politics, but stick to the big stories rather than the dry Westminster minutiae and feel free to take it to weirder places. As long as it’s in conversation in 2022 we want to hear about it!

Submissions can be based on what’s happened that week, month or even so far this year as long as the sketches or jokes are funny and feel relevant to contemporary popular culture.”

An example of what the BBC apparently finds “funny” and “relevant” appeared in episode 5 of the programme (from 07:05 here). 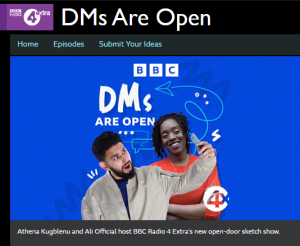 Ali Official: “Israel was meant to play Russia in the Nations League but UEFA kicked Russia out of the league because of the war crimes against Ukraine.”

Ali Official: “No-one knows, Athena, but it got me thinking. If that’s the rules, yeah, shouldn’t Israel be kicked out of the league also because the way they treat Palestinian territories ‘aint exactly civil.”

Leaving aside the fact that FIFA and UEFA are obviously not a “Western governments” and UEFA’s announcement concerning the suspension of Russian football clubs did not mention “war crimes”, anyone familiar with BBC comedy programmes would probably not be surprised by that politically motivated reference to Israel and the obviously irrelevant – and unfunny – comparison of that country to Russia, which was not attacked by Ukraine and has not suffered terror attacks by Ukrainian terrorists.

However, as we have seen in the past (see ‘related articles’ below), the BBC seems to think that the gratuitous promotion of simplistic slurs and stereotypes about Israel and Israelis is perfectly acceptable – just as long as a ‘comedy’ label is appended.