On June 1st the BBC News website published a report on its ‘Middle East’ page concerning an incident which had taken place two days earlier in the Old City of Jerusalem.

Headlined “Autistic Palestinian shot by Israeli police buried amid revenge call”, the article opened with a politically partial description of the location of the incident by in both its main photo caption and opening lines. [emphasis added] 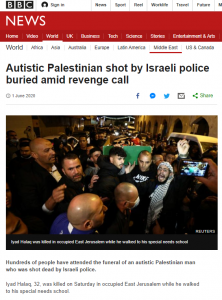 “Hundreds of people have attended the funeral of an autistic Palestinian man who was shot dead by Israeli police.

Iyad Halaq, 32, was killed on Saturday in occupied East Jerusalem while he walked to his special needs school.”

The account of the incident provided to BBC audiences is as follows:

“Israel’s police force said officers suspected Mr Halaq was carrying a weapon and that they opened fire when he failed to obey orders to stop. He was later found to have been unarmed.”

“An Israeli police statement said units on patrol in the Old City “spotted a suspect with a suspicious object that looked like a pistol”.

“They called upon him to stop and began to chase after him on foot. During the chase, officers also opened fire at the suspect, who was neutralised,” it added. “No weapon was found at the scene after the area was searched.””

The Jerusalem Post reported the police statement as follows:

“According to the statement, police officers who were stationed near Jerusalem’s Lion’s Gate noticed a young man holding a “suspicious object” that they said looked like a gun, and told him to stop in his tracks, after which the man began to flee.

Border Police were called by Jerusalem policemen to help them chase the man on foot, during which two of the border policemen fired at him, resulting in his death.

After the chase, police searched the area for the “suspicious object,” which was allegedly in the man’s hand, but never found it.”

In other words, contrary to the impression given in the BBC’s account, the police officers who called on the young man carrying what they believed was a suspicious object to stop, and then alerted additional forces in the area by radio when he ran away, were not the members of the security forces who had heard the call for assistance on the radio, saw the suspect running, called on him to stop and when he failed to do so, opened fire.

The BBC’s report went on to suggest linkage between that tragic incident and a completely unrelated topic:

“Tensions have risen in recent weeks after Israeli Prime Minister Benjamin Netanyahu said he would press ahead with a plan to annex parts of the occupied West Bank.

The Palestinian Authority has responded by saying it is no longer bound by agreements with Israel and the United States – which backs Israel keeping part of the West Bank – including those relating to security.”

The BBC’s report included an embedded Tweet from the PLO’s Saeb Erekat as well as a quote from him.

“The secretary general of the Palestine Liberation Organisation (PLO), Saab Erekat, said it was “crime that will be met with impunity unless the world stops treating Israel as a state above the law”.

He drew parallels with the killing of George Floyd in the US, which has sparked widespread protests.”

There are of course no legitimate “parallels” between the two cases but the BBC chose to further promote that politically motivated framing by including an image captioned “Israeli protesters drew parallels with the killing of George Floyd in the US”. 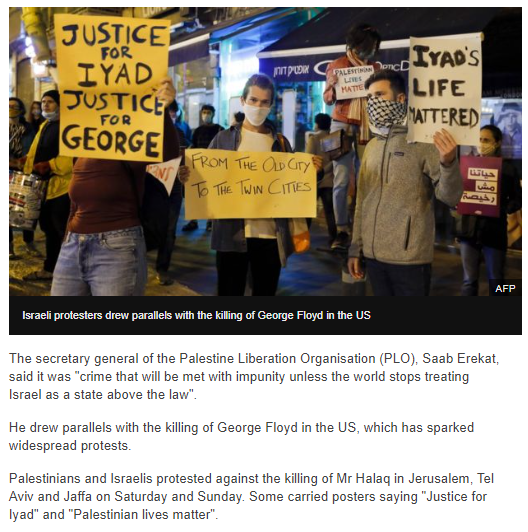 What BBC audiences did not find in this report, however, was context. Readers were not told that one of the reasons why the Israeli police force and Border Police are stationed in the Old City is the frequency of terror attacks in that area. They were given no information concerning previous attacks – including at Lions’ Gate where this incident began and where in 2017 two Border Police officers were murdered in a shooting attack.

Had that information been provided it would have helped BBC audiences understand this story far more than did the redundant linkage to the as yet theoretical story of the application of Israeli civil law to parts of Area C and the facile “parallels” between the tragic incident in Jerusalem and the totally unrelated death of a US citizen.